When Jews Were Illegal — And Turned To Others For Sanctuary 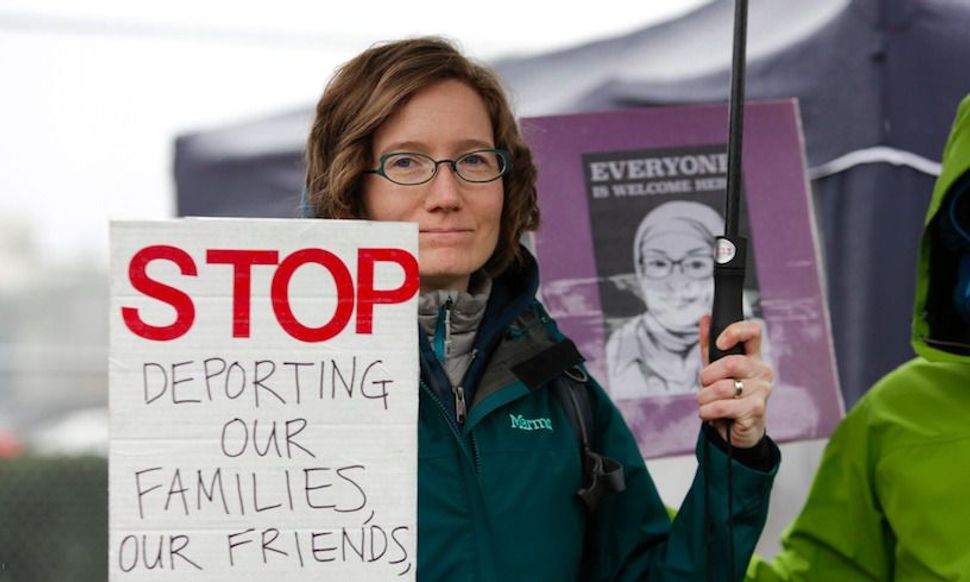 MILWAUKEE (JTA) — I was privileged recently to participate as the sole Jewish voice at a news conference with Latino leaders, community activists and faith groups at which we spoke loudly and clearly in support of compassionate immigration policies.

I told the people gathered about a piece of Jewish history I had only recently discovered — one that illustrated a strong parallel between our peoples and sharpened the moral imperative for a Jewish voice on behalf of immigrants.

In 1921 and 1924, Congress passed laws strictly limiting immigration according to nation-based quotas. The controversial laws dramatically reduced the number of Europeans allowed to enter this country and made permanent an already existing, near-total ban on Asian immigrants.

These people, it was understood, presented political, racial and cultural threats to the United States.

Three of my four grandparents had arrived several years previously, entering this country before the gates closed. But if they hadn’t, perhaps they would have been among the estimated tens of thousands of European Jews who entered this country illegally – by sailing into the ports of New York with fake German passports, by arriving in Florida by hiding in boats from Cuba, by sneaking across the Canadian border or crossing by foot from Mexico.

Or perhaps they would have been among the millions who were murdered as part of the Nazi genocide of European Jews.

Until recently, I had no idea that Jewish immigrants had entered the United States illegally. That was not our story. Unlike the “illegals” of today, our people arrived to the “goldene medina,” the golden land, only through proper channels, we have been told.

But Libby Garland’s research, described in her book “After they Closed the Gates: Jewish Illegal Immigration to the United States, 1921-1965,” takes a lid off the smug distance we are able to keep from the issue of illegal immigration. We are not better. We, too, were strangers. Illegal strangers.

The story of seeking asylum, of being refugees and immigrants, of entering this country through both legal and illegal means, is a deeply American story and, as it turns out, an American Jewish story.

But it serves only to bolster what is an eternal Jewish value, repeated throughout our texts: to welcome the stranger: “When strangers sojourn with you in your land, you shall not do them wrong. The strangers who sojourn with you shall be to you as the natives among you, and you shall love them as yourself; for you were strangers in the land of Egypt.” (Leviticus 19:33-34)

While the American Jewish community includes support for a range of political positions, it has been driven by a vision of America as a beacon of hope, a nation with shoulders and heart big enough to welcome people fleeing persecution and to absorb the hopeless seeking their second chance.

That is why our community has stood shoulder to shoulder with communities of newer immigrants as we call for policies that reflect our shared values. With allies from many different religious, ethnic and national communities, we have spoken at news conferences, issued statements, urged policymakers and advocated on certain issues with a simple but important call: Our nation and its inhabitants deserve compassionate immigration policies that balance national security with adherence to our higher value of welcoming the stranger.

The pursuit of such policies — characterized by rule of law, national interest and compassionate treatment — is not simply a moral imperative for the Jewish community. It is also entirely pragmatic and self-interested: We know that a nation that shuts its doors to immigrants will be less kind to those already here.

With other minority groups, we can envision the outcomes of nativist policies that divide rather than unite. At a recent gathering, “Milwaukee Gathers in Unity for Human Dignity,” we listened to the stories of refugees from Africa, Asia, Central America, the Middle East and Europe.

Such events are not only symbolic. They draw a community closer around shared values while giving elected officials an opportunity to clarify their position. At this event, Milwaukee Mayor Tom Barrett signed a resolution expressing opposition to the Presidential Executive Order 13769, the “travel ban.” He voiced a clear promise that local police officers would not act as immigration enforcement agents.

This work is essential to Jewish community relations, driven by enlightened self-interest through vigorous and strategic relationship building. We stand with allies, protecting them when necessary, and we ask them them to stand with us, interrupting hatred and linking arms with us when we need their support.

Those of us who feel safe in this country cannot absent ourselves from this renewed debate about the nature of this country as a patchwork of ethnicities. That is the blessing of living in community, knowing our neighbors — learning about their stories and concerns, and recognizing that they, too, were created in the image of God.

(Elana Kahn is director of the Jewish Community Relations Council of the Milwaukee Jewish Federation.)

When Jews Were Illegal — And Turned To Others For Sanctuary