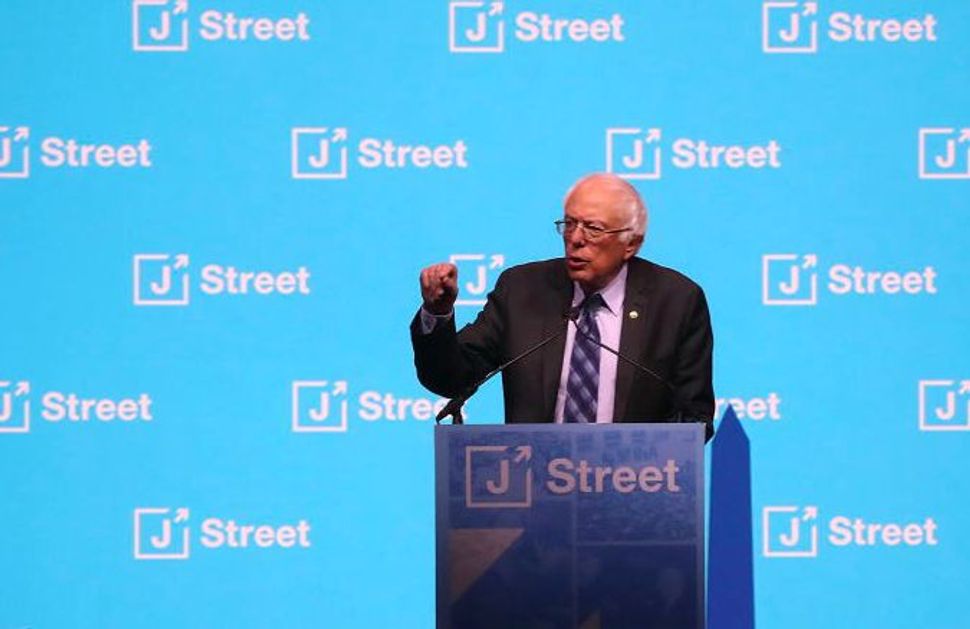 On Monday afternoon, February 27, Sen. Bernie Sanders delivered what appeared to be his first-ever keynote address to a national Jewish organization. His host, unsurprisingly, was J Street, the self-described pro-Israel, pro-peace advocacy organization. The liberal Jewish group was holding its once-a-year national conference in Washington, D.C. The liberal Jewish senator couldn’t have asked for a friendlier crowd to flesh out his thinking on Israel.

And yet, somehow, there were long stretches in the half-hour speech during which a casual listener might not have realized Israel was on the agenda. Fully half of Sanders’s talk to the Israel policy group had to do not with Israel but with America, with bigotry, violence, the Iran nuclear deal and “the significant outbreak of anti-Semitism” that has erupted “since Donald Trump’s victory in the presidential race.”

The other half, focused on Israel, had few policy specifics and a lot of talk about values like peace, democracy, tolerance and shared humanity — values, incidentally, “upon which the State of Israel was founded,” Sanders said, as he “saw and experienced for myself” during his months on “a kibbutz near Haifa” in 1963. Values. Humanity. Trump was the topic even when his name wasn’t spoken.

The same was true throughout the two and a half day conference. The unsettling new realities of the Trump era were laced through every discussion, in the meeting rooms and hallways alike, whether the formal topic was Israeli security or American Jewish politics. (Full disclosure: I was there to moderate a panel discussion on the Jewish community.)

The mood was similar a few blocks to the west at the annual assembly of the Jewish Council for Public Affairs. The council coordinates policies, or tries to, among a broad spectrum of national Jewish organizations and local community councils. Topics on the council meeting’s agenda were similar to years past, but the changed reality of Trump-era America was the constant subtext.

That’s the way it is across America. As the weeks go by, logic and history dictate that we should be growing accustomed to the Trump presidency. Instead, our shock and confusion continue to grow. The street demonstrations don’t let up. We hear calls to action at community gatherings, national conventions, dinner parties.

What action? Nobody is quite sure. Or, rather, many of us are quite sure, but our answers are all over the map: Call your representatives. March downtown. Give to the cause. Adopt a Syrian family. Hide under the bed. Tell your rabbi to speak out from the pulpit. Tell your rabbi not to speak out, because it would divide the congregation. After all, people come to synagogue to pray and get away from the daily grind. After all, people come to synagogue to unite and act on Jewish values.

The reality is that we don’t know what to do about Trump, which only adds to our shock. There’s a widespread sense that something has changed in America. What happened last November wasn’t simply another Republican victory over a Democratic rival, it was something different: a transformative shift to a different sort of politics, at once less competent and more dangerous than the norm. Liberals thought America had hit a low point with George W. Bush presiding over an assault on progressive social values and an unjustifiable, destabilizing war. Now that Trump is in office, we are nostalgic for Bush.

There’s constant chatter about unseating Trump, either through impeachment — starting with the emoluments clause in the Constitution, which forbids the receiving of gifts from foreign powers — or a declaration of presidential incapacity. In reality, both seem hopelessly far-fetched. Either would require a Republican majority in Congress, and Republicans are highly unlikely to revolt against their own party’s leader, despite the discomfort many of them feel with the man and his governing. And so Trump opponents focus on trying to block specific policies, from the immigration and travel ban to domestic program budget cuts.

The paradoxical result is that liberals see a problem in Washington that’s fundamentally different from anything preceding it, but they’ve set out to fight it with the same tools and methods they’ve used in the past. Conservatives, for their part, are lining up in defense of an administration most find repugnant.

There’s a perennial myth that’s become wildly popular in recent months, according to which American Jews lean overwhelmingly toward the Democratic side and so the Jewish community, collectively speaking, has an obligation to stand up against this Republican administration. It’s partly true: Democrats have won a majority of Jewish votes in nearly every presidential election since 1928. The sole exception was Jimmy Carter, who won just 45% among Jewish voters in his 1980 re-election bid. (Ronald Reagan won 39%. The rest went to the third-party candidate, John Anderson.)

However, the Democrats’ margin among Jewish voters has varied widely. The high scorers were Franklin Roosevelt in 1944 and Lyndon Johnson in 1964, at 90% each. The low scorers were Adlai Stevenson in 1956, with 60%, and Michael Dukakis in 1988, with 64%.

The results last November were right in the middle. Looking at the 13 presidential elections since 1964 — the last time Democrats won a majority of white votes — we’d find that only five Republicans fared better than Trump among Jewish voters, and seven fared worse. Trump was tied with George W. Bush ’04 in sixth place at 24%. On the Democratic side, paradoxically, seven scored higher than Hillary Clinton and only five did worse. Clinton was tied with Carter ’76 for eighth place at 71%.

Accordingly, when liberals speak about the Jewish community being united against Trump, they’re speaking about part of the community. It’s a big part, true. But the part that isn’t appalled, while a minority, isn’t to be sneezed at. They tend to be the most deeply engaged with Jewish observance and/or the most generous in their support of Jewish community life.

That means that while many Jews are deeply unhappy with the new administration, and a big proportion see the country heading in a direction that offends their Jewish values, the Jewish community as a whole appears to be neutral. Or should we say — paralyzed?