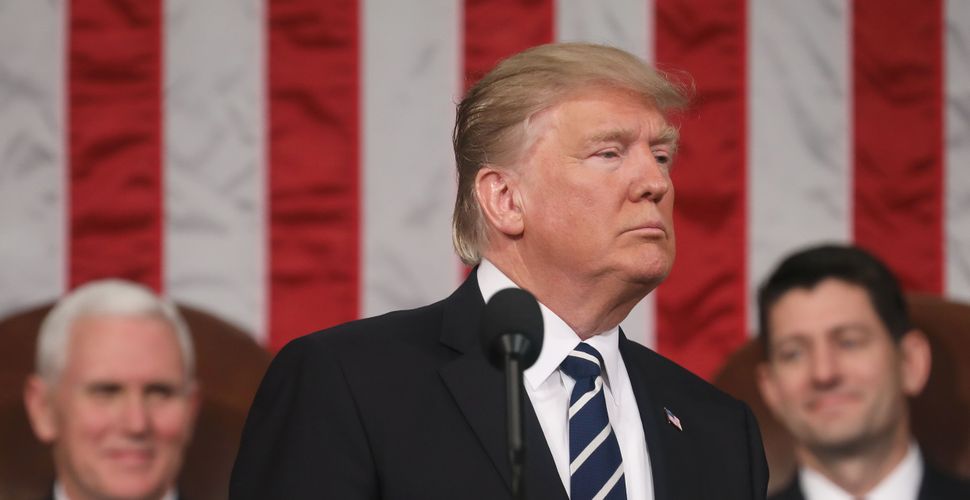 President Trump delivered an unexpectedly presidential speech when he addressed a joint session of Congress for the first time last night, reciting his campaign promises in a kinder, gentler tone, gesturing at compromise and offering a gauzier vision of America than we have ever heard from him before.

But laced through the hour-long speech was the unmistakable assertion of virulent American nationalism. A “great, great wall” will be built on the Mexican border. Trade deals will be renegotiated. Immigration will be restricted and remade to focus on economic self-interest instead of humanitarian values.

It will be harder for people to come to America, and harder for companies to leave.

This was a more sophisticated version of the “America First” ideology that characterized Trump’s fierce and foreboding inaugural address, and drove his unlikely political campaign to the White House. For Trump, it’s a zero sum game. You are a nationalist or a globalist, a patriot or a traitor. By putting America first, every other country and concern is not second or fifth, but dead last.

As a Jew, I know better. I know this is a false choice. I know this because for centuries Jews have demonstrated that it’s possible to feel proud devotion to a nation and fealty to a people scattered around the globe.

The duality of this existence has, at times, left us confused and vulnerable, caught between separation and assimilation, between the particular and the universal, as if we were on a virtual seesaw and one part of our identity rises while another falls.

I didn’t say that it was easy to hold this sort of hyphenated identity in balance, but it certainly is possible. I am American to my core, but also ineluctably linked to Jews around the world through shared beliefs, traditions, rituals and an approach to life that can transcend national boundaries.

And because so many of us are immigrants ourselves, or a generation or two removed from that experience, we know that national pride can be acquired. Patriotism is not bequeathed at birth. It can develop over time.

Trump doesn’t understand this — ironically, since his own mother was an immigrant to the United States. His delivery last night may have been smoother and more disciplined, but the message was just as bigoted: Immigrants were presented in only the most hostile, reprehensible context, as murderers who steal jobs from Americans and bring chaos to our shores.

Never mind that this picture is flat-out wrong: The vast majority of unauthorized immigrants are not criminal aliens or aggravated felons. They certainly aren’t terrorists, the way Trump implied when he promised to “keep those out who will do us harm.”

In fact, the number of Americans killed in acts of terrorism — both on U.S. soil and abroad — between 2001 and 2014 was 3,412, and that includes the victims of the 9/11 attacks. During the same period, guns killed 440,095 people here at home. (These figures, by the way, come not from the lyin’ media, but from the U.S. Department of Homeland Security.)

And, as we all should know, the number of Americans killed by terrorists from the seven predominantly Muslim countries included in Trump’s initial executive order banning immigration is zero.

This cynical equation — America is good, everyone else is bad or questionable, terrorists or shysters — also infects the economic and foreign policies Trump outlined last night, from throwing up protectionist barriers on trade to implying that America’s relationship with our allies must be reconfigured in our best interests.

But those are false choices. Trade, if structured correctly, benefits the American worker and the overseas economy. Geopolitical alliances, if managed wisely, strengthen American interests at home and abroad.

When Trump said that his job as president is to represent the United States and not the world, he was framing a binary option that need not exist. A skillful, strategic president can and should do both.

Trump is masterful at stoking the very real anxieties of too many Americans who believe that globalization and greed have robbed them of employment and status, emptied out their towns and depressed their futures. It is only human to recoil at a perceived onslaught and to rely on your own for defense.

So, yes, let’s “buy American and hire American,” as Trump exhorted last night. Let’s take care of our own citizens first. We can pledge allegiance to our flag and mean it.

But that does not mean we shut out the world, relinquish our leadership role and act as if everyone else is out to get us. The wall that is erected to keep out “undesirables” will inevitably trap Americans inside.

The perceived success of Trump’s speech last night — the fact that he faced a low bar and managed to jump over it — makes it even more important that we argue against this false choice now, with passion and stamina. With the rise of extreme nationalism here, in Europe and beyond, leaders like Trump would do well to examine Jewish history. Jews are often made to be the scapegoats when, in fact, we can be the symbol of citizenship in a global moment.