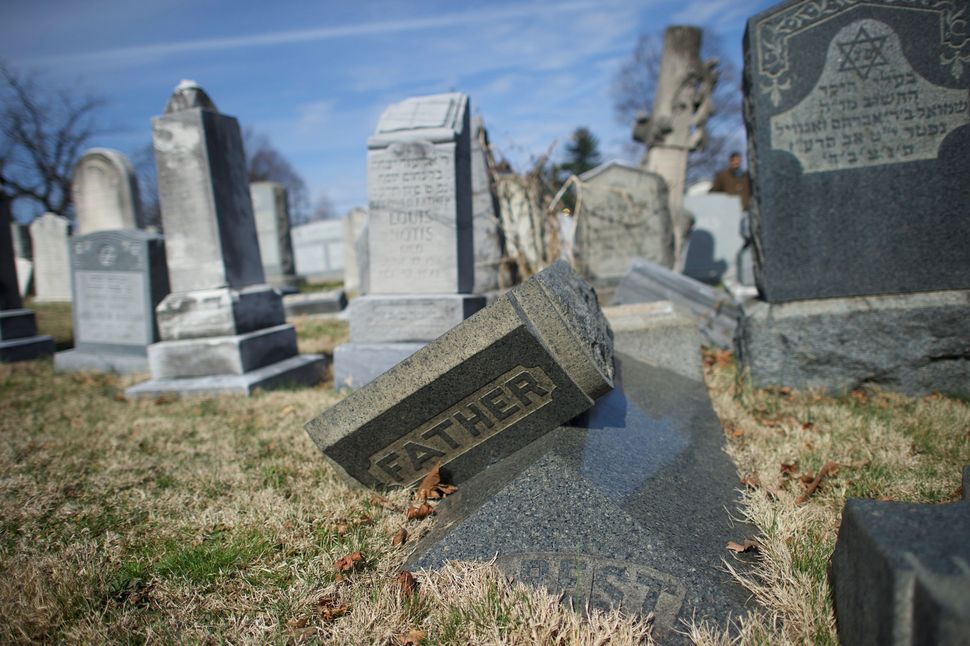 It actually had the opposite effect.

The toppled headstones, shattered on the ground, divided the letters of the names commemorated there so that they could not be read. Actually, they brought greater attention to the lives of those buried in the hallowed ground.

Images of haphazard destruction, of wanton vandalism, knocking over some and not others, made national and world news, announcing that there are still cretins who want to destroy Jews and their dignity even in death.

Yet, the destruction of more than 530 graves at the Mount Carmel Cemetery, in North Philadelphia, the final resting place (such irony in using those words now, as the barbarity of the destruction is an attempt to keep us all in a state of unrest) of my great-great-grandparents Moritz and Sarah Amsel Grossman, who immigrated to this country in the 1880s, and of many other relatives, did not desecrate those lives but instead sanctified them.

Thanks to the heartless criminals, I learned where my great-great-grandparents came from – Sacheroff, Germany and Munkacs, Hungary – as well as the names of their parents (David Amsel and Florence Baum, Harry Grossman and Esther Schwartz).

I got in touch with cousins whom I don’t speak to regularly, and chatted more frequently with the ones with whom I am in contact. After a call from the National Museum of American Jewish History for those with family members buried at Mount Carmel Cemetery to share their stories, I posted stories about my great-grandmother Pessl Baila, aka Bertha, for whom I am named Beth Pearl, and my great-aunt Blanche, who died at age 9 from an illness she suffered after being out sledding in the winter. I wrote what my grandmother told me about her mother, that she encouraged her and her sister to get both secular and Jewish educations, and that she was a successful businesswoman with a millinery store who could find a hat to perfectly suit every customer.

On Thursday, March 2, at a Stand Against Hate rally in front of Philadelphia’s Independence Hall, the stories of some of the Jews buried in the Mount Carmel Cemetery were read to the crowd of hundreds by Josh Shapiro, Pennsylvania’s attorney general. Prior to the event, he reported to the press the bizarre, depraved suggestion by President Trump that perhaps Jews perpetrated the bomb threats causing the evacuation of Jewish community centers around the country to make him look bad.

Shapiro also read the paragraph I wrote about my great-aunt who died in 1917.

This is the grave at Mount Carmel of my great-aunt Blanche Reisman, who passed away at age 9 from illness in 1917 … This picture of Blanche hung in my grandparents’ house always, and I have loved it and found it ghostly as it must have been taken not too long before Blanche died. Her presence was with her sister throughout her life, and it is troubling that the cemetery which is her final resting place is not a place of consolation but rather one of anti-Semitic violence. It saddens me to think maybe she was better off not knowing of some of the terrible things which have happened in the world.

All I have of Blanche (1908-1917) is the framed photo, shown below, of a young girl in a white dress, with a vase of flowers in the background. I was so pleased that the story of a little girl who died an untimely death and who is still remembered and cherished as part of a family could be more widely known that those in attendance understand, that we Jews treasure each and every life, no matter how brief. 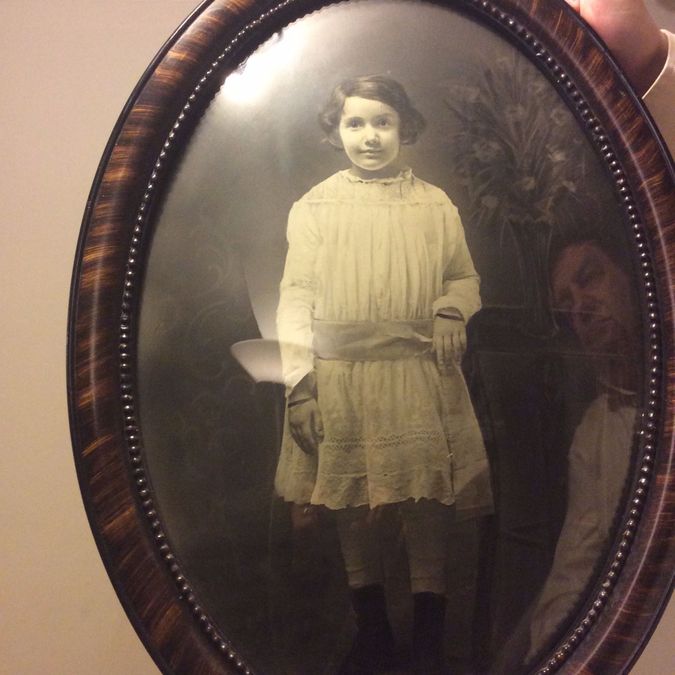 These cemetery desecrations have offered us a rare chance to share our stories with those who want America to be a welcoming, tolerant place. I am heartened by offers by Muslims to protect cemeteries, and by Pennsylvania labor unions to fund the restoration of the headstones.

Though the stone markers are now physically demolished but will soon be restored, the graves of those in Mount Carmel Cemetery and the lives they commemorate are now receiving greater honor. May their souls ascend as they are remembered by not just their family and the Jewish community, but by the larger community as well.

Beth Kissileff is the author of the novel, “Questioning Return.”