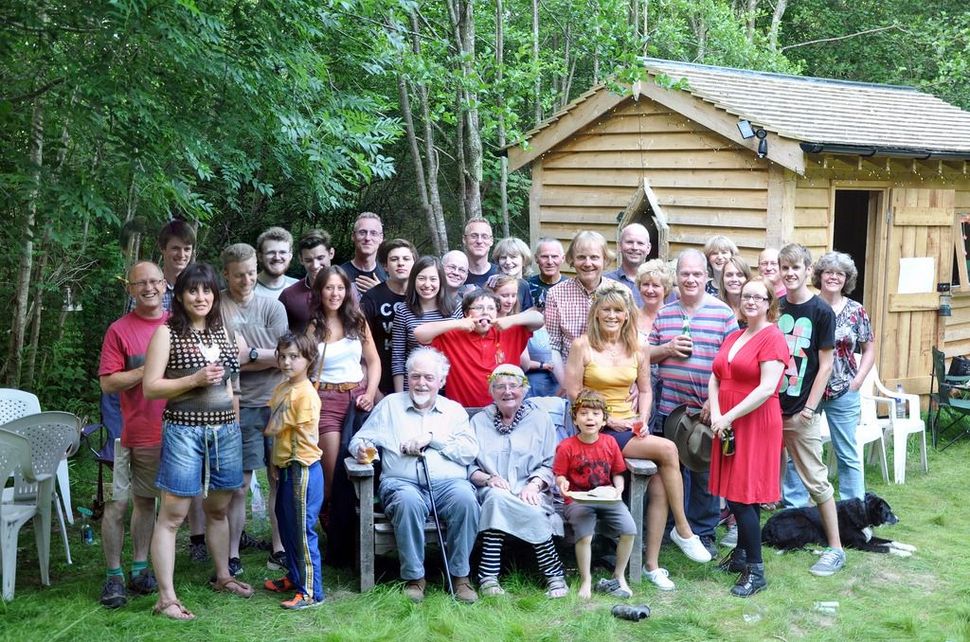 In 1886, a scared 16-year old named Menachem Mendel Lehrman made his way to the Russian border and sneaked into Germany. In Hamburg he took a ship to New York, a trip that left him so sick he couldn’t write home for a year.

Back in Belarus, his family decided he was dead and sat shiva.

But Max — his American name — lived on. He helped bring over a dozen of his brothers, sisters, and cousins. While he never got a full sense of what he’d launched, his descendants did. In 1986, we held a reunion to mark the 100th anniversary of our family patriarch’s maiden voyage.

And one day, I found myself in the Bayonne branch of the National Archives, searching through microfilm to find the ship manifest for his trip. I thought my cousins would like seeing this often handwritten list of passengers, the towns they came from, and where they were bound. No luck. The reunion was an astounding success. We didn’t need the manifest. But it always bugged me that I couldn’t find it.

So about three decades later, I tried again. This time, I found it in about ten minutes, thanks to the Internet.

Today, technology means things that once took weeks to organize now take minutes. American Jews interested in tracing their roots should know how easy it’s become to do something so rewarding..

We can make too much of genealogy. It shouldn’t always matter if we meet someone who turns out to be a fifth cousin—or that we’re descended from a famous rabbi. But the reunion we put on stays in my mind for many reasons that do.

For one thing, it was a lot of fun. We congregated at a Catskills Hotel. Henny Youngman headlined. For the occasion he switched all his characters’ names to Lehrman (“Marv Lehrman got hit by a bus…”). A stunning 469 people came. We’d walk along the halls past other who seemed like strangers except for one eye-popping difference—each one wore a name tag branding them as a cousin.

Meanwhile, cousins divided by the bitter feuds of grandparents made up. Neighbors discovered they were related. A family we had rescued from Vienna thanked the entire family for posting the $2500 bond in 1939 that allowed them to escape to the U.S. Another family from New York, puzzled for decades about their sibling’s mysterious death in Colorado, found the long-concealed answer from our Denver relatives.

The best part, though, was less dramatic. It was seeing newly discovered cousins stay up the entire first night, talking, reading through the book of memoirs we’d created, or studying the six-foot long family tree. One of our artist cousins had drawn it, with painstaking care. It came in three sections you had to tape or sew together. Mine still hangs on our dining room wall.

How often do you sit at three in the morning with people you hardly know, talking about grandparents as if they were people? Tell stories that give you insight into your own past? Or muse with surprising intimacy bout what happens to families as the decades roll past?

Is it hard to create a reunion that allows that? No. And while websites exist which are full of ideas about what to do at reunions, this article aims to inspire those who are too worried about screwing up to start. You won’t fail. Your reunion will be successful, meaningful—and fun. Here are ten tips to help.

Reuniting a scattered family is too hard for one person. For our reunion the co-coordinators (I was one) picked a leader descended from each of the twelve children of our great-great grandparents, and invited them to a meeting. None of us knew more than a handful of the others. But they all came. For a while we were smilingly polite. After a half hour two cousins started arguing about someone’s true age. “Now I know we’re cousins,” someone quipped. That broke the ice. No committee can be afraid to disagree. All families argue. We started to divide up the tasks.

You need to communicate often to build interest. You’ll do most of that by e-mail or by creating a website. But the mailing list should include both an e-mail and home address. People are curious about where everyone lives. First contacts might just be a “Would you be interested?” e-mail. Do you need snail mail for anything? Our experience was that everyone was so excited we didn’t need formality. Meanwhile, e-mail means you can now avoid addressing envelopes or licking stamps. Save your energy for chores that matter.

Small reunions are easy. But ours was big. It took two years. That’s fine. Two years won’t erase the interest in celebrating a Centennial. Taking time means that if your Mom’s only living uncle wants to come from San Francisco, you won’t conflict with his cruise to the Danish Fjords. Set a date far enough ahead so cousins will have nothing else on the schedule. Meanwhile, a long planning period means the reunion won’t dominate your own life.

From the very first e-mail to cousins, don’t just announce the event. Give them a sense of why it would be exciting. It’s easy now to find a photo of the earliest ancestors, or the ship that brought them over — or a page from, say, the 1920 census, where the census taker has scrawled your mother’s name, noting that she speaks Yiddish. There’s a romance about the search for ancestors. Show that from the first. But also make clear that you’re looking for a location with a big game room. You don’t want the first words from your kids to be “Do we have to?”

PICK A LOCATION WITH CARE

For us, it was easy. Most of the descendants still lived on the East Coast. There were still large Catskills hotels in business. Hotels and conference centers offer a lot. But it makes sense to make it near to where the bulk of people on your mailing list live. And think hard about cost. You want to make the event viable for cousins who can’t afford a big trip. 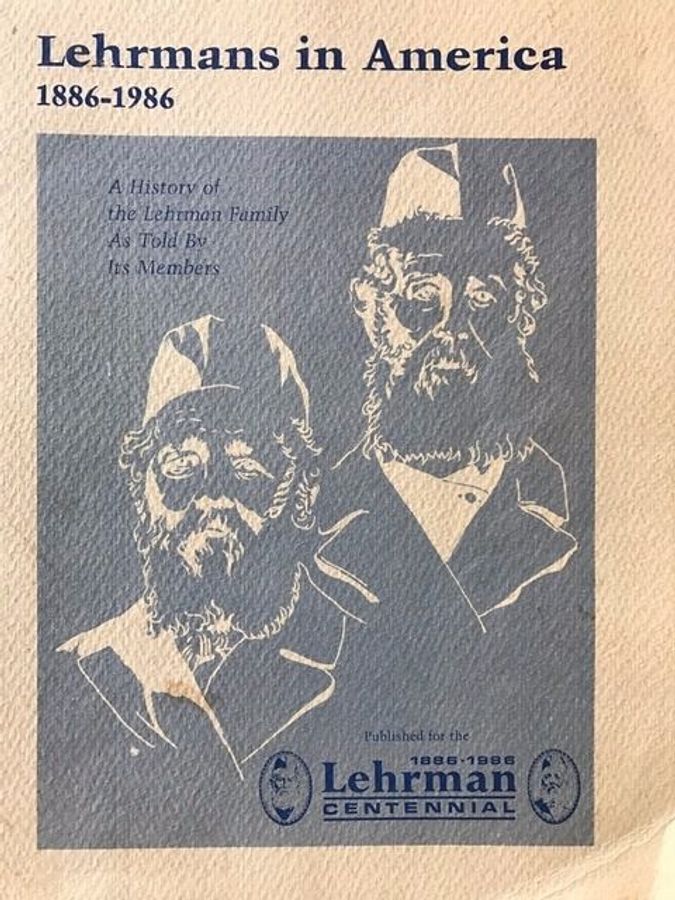 Image by Courtesy of Robert Lehrman

CREATE A BOOK ABOUT FAMILY HISTORY, AND A FAMILY TREE

The leadership committee thought this might take lots of work. It did — but not because we had to pressure people to write. Contributions poured in, including the cover illustration of Beryl Lehrman, above, created by Lewis Barrett Lehrman. But we were floored by how many people wanted to write about their parents and grandfathers — and share old photos we had never seen.

DON’T STICK YOUR NOSE UP AT SOUVENIRS

We had t-shirts, mugs, the family tree, the 200-page Lehrmans in America book, and after it was over, a video—VHS in those ancient days. When I visit relatives, they still get out those mugs and drink a coffee toast to the now great-great-great grandparents embossed on them.

RECORD VIDEO OF THE OLDEST COUSINS

Some people have told me, “If I’d only done this ten years ago. Now everyone’s passed on.” Not true. On the first full day, we found a cousin with a film major, reserved a room, and had her tape interviews with everyone over 75. Now those are on DVDs. Every single one of the people we taped has now died. But today, we can watch them all, talking about the early days with an energy and detail the print memoirs couldn’t capture.

You don’t want people sitting around, You don’t want people talking just to the cousins they know. We had a panel discussion about our ancestors where questions went so long we had to do another. Softball games, entertainment from musical relatives, talks by cousins involved in politics, an ice-cream sundae party … why not schedule an afternoon where everyone takes a DNA test. The science is good and the results fascinating. There are dozens of ways to make a two-day reunion fun.

PREPARE FOR WHEN IT ENDS

The 469 cousins and spouses who came didn’t want to leave the cousins they had met. The annual newsletter, address book, videos, and hard-copy of the family memoirs — so quaint in 2016 — made possible the online newsletter one dedicated cousin sends us now. Meanwhile, we’ve had two other reunions. They were smaller. But just as warm. And we hear about dozens more events in distant cities to welcome a college student new to town—or help them find jobs.

Sometimes, usually late at night, I go online and poke around. It’s not always about genealogy. I found some old glass negatives in the house, once—portraits,— with the names scratched into the emulsion, used the internet to track their descendants down and sent them portraits they’d never seen. But often I read and write notes to cousins I never would have known without that get-together in 1986 but who have become friends. My ancestors on both sides were Jewish back to about 1800. My DNA test shows 15% non-Jewish ancestry split between the Caucasus Region, the Iberian Peninsula and South Asia. The scenarios I could spin!

But reunions don’t just uncover the past. They influence the future. It turned out we would form new friendships and had kids who got to know each other. They may not be sure how they’re related but they feel a bond.

That’s true even for the youngest kids that came.

Last year, up in Massachusetts, I went to a Medford restaurant with some friends. When we came in, the manager ran up to us. “You’re the one with the Lehrman reservation? My name isn’t Lehrman but I’m descended from Lehrmans.”

“Who’s your grandfather?” I asked.

I was too confident. After thirty years the name sounded only vaguely familiar.

We stumbled around, naming some possible connections. Suddenly she said, “Oh! When I was eight my Mom took me to a big reunion in the Catskills. A lot of Lehrmans were there.”

“Did you get a family tree?”

We didn’t get a free meal. Not even a discount. But when I got home I could look up things about her great-great grandparents this descendant of Menachem Mendel’s brother didn’t know. It didn’t change her life. But she was happy to know them.

And if he could have known what’s happened because of his trip 13 decades ago, so would that scared teenager whose name is scribbled on the manifest I now have beside me.