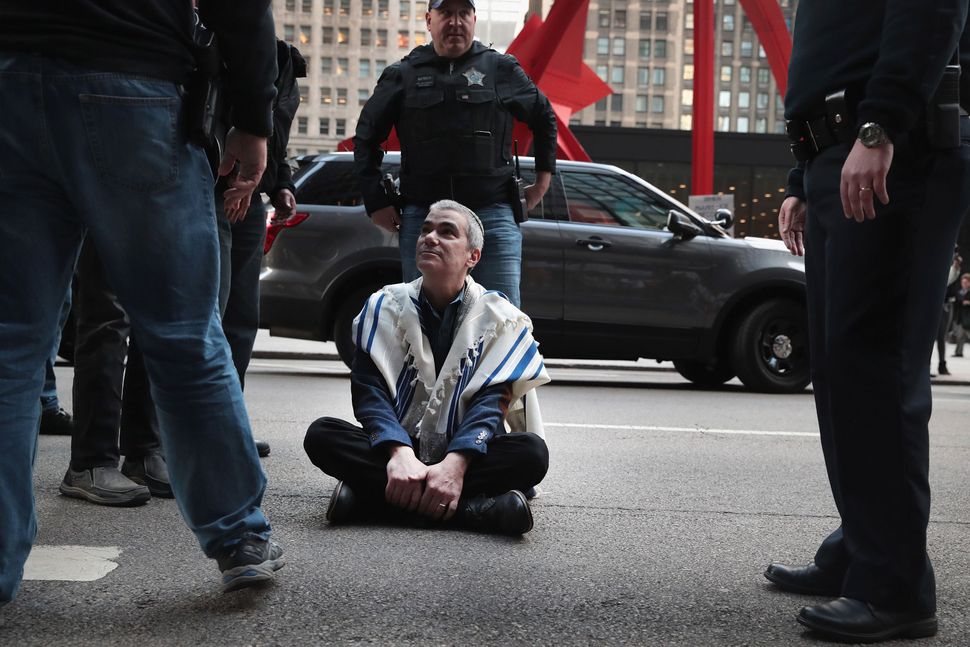 “An unjust law is not a law,” the Rev. Martin Luther King Jr. wrote from his Birmingham, Alabama, jail cell. The letter is well known – less so the fact that King was writing to fellow church leaders who disapproved of his breaking the law in the name of civil rights.

I was saddened to read my colleague, boss and friend Jane Eisner recently making the same argument as King’s critics. Religious institutions, she writes in a column about the burgeoning sanctuary movement, “serve as a prophetic voice against government corruption and cruelty. That standing comes from respecting the law and working within the system. If the good guys step away from that compact, the bad guys will surely follow.”

As a rabbi, journalist, and Jew, I totally disagree with that statement. It is wrong on religious morality, wrong on politics, and wrong on the aim of the sanctuary movement.

First, the moral value of civil disobedience does not derive from whether it breaks or obeys the law. On the contrary, precisely the point of such disobedience is that the laws it disobeys – be they segregation orders in the 1960s or deportation orders today – are themselves unjust.

If the underlying law is immoral, it is moral to resist it.

According to the theories of nonviolent resistance put forth by Dr. King, Gandhi, Emerson, and others, when the injustice of those laws is laid bare, in all its sickening, violent glory, good people will oppose them. But it takes what Dr. Heschel called moral audacity to reveal such laws for what they are.

This is true on right and left. Jane worries that churches might break the law in the name of “protecting the unborn,” for example. But that’s been happening for years. And as long as they aren’t interfering with the rights of others, I have no problem with that. It’s only when their actions torment women, threaten doctors, or restrict other people’s choices that I object to them. (The Johnson Amendment incidentally, prohibits religious institutions from backing specific candidates, not taking moral-political stands. It’s not analogous.)

To take such actions isn’t to politicize religion; it’s to give it purpose. What’s the point of perpetuating religion if all we do is remain seated for the next responsive reading? Jane’s false politics/religion dichotomy is not how most religious people understand themselves and their values. Personally, if my religion doesn’t lead to action, I’m done with it. And if I can’t do that in a group, I’m going to find another group.

Jane worries that churches will become politicized, but they have been for two hundred years. At least progressive ones are protecting people (real ones, not “unborn”) rather than restricting their rights. Conservatives don’t need our permission to flout the law when it suits them. Consider Kim Davis, the Kentucky clerk who refused to sign marriage certificates that she found religiously problematic. Or Bob Jones, who preached the Divine origins of segregation and whose namesake university defied federal law to perpetuate it. Or the network of pro-life organizations which flouted federal election laws for decades, before ultimately succeeding in eliminating them altogether.

Second, Jane’s piece equivocates on her real objection to sanctuary congregations, when she argues that it’s not lawbreaking that’s the problem, but “alienat[ing] those reasonable Americans who don’t hate all immigrants but do think it’s wrong to be in this country illegally” and lacking “a specific policy aim.”

Notice that these are questions of tactics, not morality; obviously, popularity and morality are not coextensive.

They also get the politics wrong. Is it true that helping families from being broken apart will alienate reasonable Americans? I don’t think so; on the contrary, I think it will highlight for those Americans the injustice of the Trump immigration policies.

Maybe it is “wrong to be in this country illegally.” Or maybe those laws are wrong. But either way, is it right to deport people brought here as children, or deport the mothers of American citizens and render their children orphans?

That’s why the sanctuary movement has attracted moderates and conservatives, as well as liberals. As my friend Shawn Landres, co-editor of Religion, Violence, Memory and Place, put it, they are creating a Jewish ‘Overton Window’: a bounded space where trans-partisan agreement is possible. We may disagree on whether there should be a path to citizenship, for example. But we agree that it isn’t pro-family to tear families apart.

While the deportation orders may be ‘political’ in some broad sense, they are also actually trans-political. They are precisely the place where people of different political persuasions might agree to work together.

Indeed, the impossibility of some kind of pragmatic policy solution is precisely why sanctuary synagogues, mosques and churches exist in the first place. We can’t achieve a “specific policy aim” that would shield the innocent from violence and deportation. Just like the Underground Railroad couldn’t achieve the “specific policy aim” of ending slavery. That’s why we resist.

Finally, Jane doesn’t fairly represent what sanctuary congregations are about. I had the honor of visiting one such congregation, Los Angeles’s IKAR, just two weeks ago. They set forth a clear set of goals that differ widely from Jane’s seemingly uninformed assumptions about the naïve activists behind the movement.

These goals include “amplify the moral imperative to stop deportations”; “defend administrative policies such as prosecutorial discretion”; “protect those enrolled in DACA”; and “provide know-your-rights education.”

And their tactics were smart as well: “provide tangible and physical resources”; “provide companionship to people in Sanctuary care”; “provide rapid response and support in situations in public need” and others. All these are online at ikar-la.org.

These specific, smart actions stand in stark contrast to what I found most problematic about Jane’s piece, which was the way it condescended to those who are putting their lives and livelihoods on the line.

Writing of her childhood synagogue having been an illegal storage location for arms bound for Israel (and before that, its site having been a stop on the Underground Railroad), Jane says that the illegality of these acts “added to their allure when I was growing up, creating an example of civil disobedience that seemed significant, righteous and, to be honest, kind of thrilling.”

Sanctuary is not about safe, privileged white people getting a thrill. It is about saving lives that are in danger because of our country’s failure to sufficiently rise above its cruel, nativist instincts. To suggest that the frisson of law-breaking has something to do with the sanctuary movement is profoundly troubling.

While I am grateful to Jane for allowing me to respond to her piece, I was frankly horrified to see the editor in chief of the Forward publish such sentiments, when this newspaper has proudly stood with workers, draft resisters, civil rights activists, and progressives of all kinds.

The moral standing of religious institutions does not come from working within the system. It comes from standing outside that system – sometimes supporting it, sometimes resisting it, but never a part of it. And when the system turns toward authoritarianism, nativism, and even elements of fascism, those with moral vision know clearly where they ought to stand.