Explosive Charge: Israel Is Not Part Of A ‘Cycle Of Violence’ 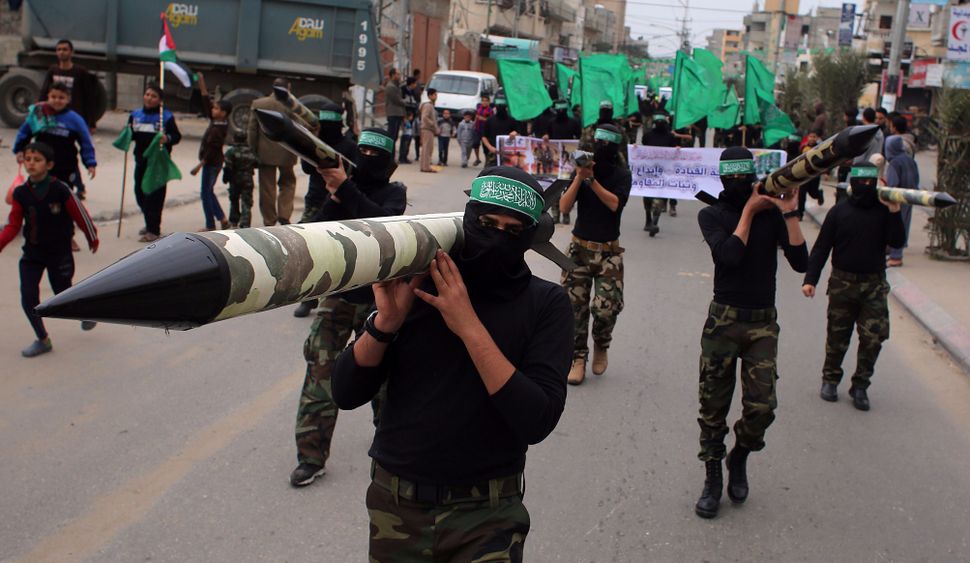 The Israeli Air Force attacked Hezbollah targets in Syria on March 17, days before it went after Hamas targets in Gaza. The Israeli strike in Syria, reported in several news outlets, targeted weapons that convoys destined for Hezbollah. The weapons – almost certainly supplied by Iran and Syria – apparently had the potential to alter the balance of power in the region.

The Israeli attacks in Gaza came in response to volleys of rockets fired by Hamas into Israel. The Israelis successfully struck their targets, while one set of rockets from Gaza landed in an open field in the Sderot region and another set landed in the Jordan Valley (the location of this last Hamas launch must have been from somewhere in the northern West Bank).

Using information gleaned by the Arabic and Hebrew press, we can piece together the events surrounding the Israeli strike in Syria. After hitting their the weapons convoy, and after Israel’s F-15 planes had safely returned to Israeli air space, Syria launched several Russian-made S-200 missiles across the border. The Israeli military spokesman confirmed, for the first time ever, that one of the S-200 missiles was successfully intercepted by Israel’s Arrow surface-to-air defense system.

The Israel Defense Forces never confirms exactly where rockets, usually launched by Hamas, land. The point is not to transmit targeting coordinates to terrorist rocket launchers. If terrorists have new locations for their spent rockets, they can adjust their sites. And if they have enough time to launch another rocket toward their target they might improve their accuracy. That is why, in Israel, journalists operating in the field in real time near a rocket attack do not broadcast their exact location (and foreign journalists get in trouble if they divulge location details).

Terrorist rocket teams in Gaza know that there is a strong possibility that Israel will triangulate their location and scramble a helicopter, an F-16 or a drone and strike back. So terrorist rocket crews do their deed and then quickly pack up, jump into their pickups and speed away.

Sometimes Israel targets the people responsible for the violence – at a time of their choosing.

One now classic textbook case of an Israeli response was so precise that the car containing the terrorists, which was driving, caravan-style, with another car, was hit, while the accompanying car continued on its way, unscathed. Unscathed also was the civilian motorcycle that was overtaking the terrorist cars at the same moment as the explosion. The scene was impressive – a lesson in the sophisticated accuracy of modern weaponry.

This phenomenon of attack and response between Hezbollah and Hamas and Israel is often referred to by many media outlets as the “cycle of violence.” That is wrong; it is not a cyclical process. Those in the media who refer to these military responses as a cycle of violence are either wrong, naive or anti-Israel, and willingly wish to condemn Israel. They assume that Israel has the ability to control the “cycle of violence” and deescalate it by not responding.

Israel applies a calculus. That already means there is no cycle of violence. Every time there is a rocket attack, from Gaza, Lebanon or Syria – Israel does not always react!

In order to strike its foes, Israel must know who or what those foes will be attacking. They must connect the attack with the place or the people they are striking, and it must be clear that the Israeli attack will deliver a clear message that this is a response to shooting rockets into Israel.

The calculus is not stagnant. It changes if Israeli civilians are hurt or killed. It changes if civilian targets are damaged. It is calibrated differently when a rocket or a series of rockets hits open fields or when there is an increase in the number of attacks.

The terrorists are aware that while Israel will strike at targets and sources, including command-and-control centers, to diminish attacks, Israel will also go to great lengths not to injure innocents. It is the naive, mistaken and anti-Israel cabal that ignores the calculus and continues to refer to the complex conflict as a cycle of violence.

The reality is that terrorists want to balance on the brink. They want to launch rockets but not too many. They want to terrorize Israel up to the point of provoking a response. They want Israelis, especially those living near the target zone, to live in a constant state of fear.

There is no parallel and no equivalence between Israel’s response and rockets launched into Israel from Gaza.

The objective of Hamas rockets is to wound, kill and frighten as many Israelis as possible. The objective of Israel’s measured response is to target the specific forces who fired those rockets in a bid to protect its civilians. The difference is not just military – it is a moral response against an extremist and ideological agenda.

As for Hezbollah and Syria, the IDF realizes the threats are more significant. The most important issue for Israel is to prevent Hezbollah from gaining new, sophisticated heavy weapons. That’s why Israel, on a relatively frequent basis, jets over Syria to target military convoys, weapons depots and airbases — just as they did this morning.

Terrorist leaders in Gaza, Syria and Lebanon understand the risks and rewards of their deadly decisions.

If only Israel’s critics in the media would brush up on their remedial math.

Explosive Charge: Israel Is Not Part Of A ‘Cycle Of Violence’