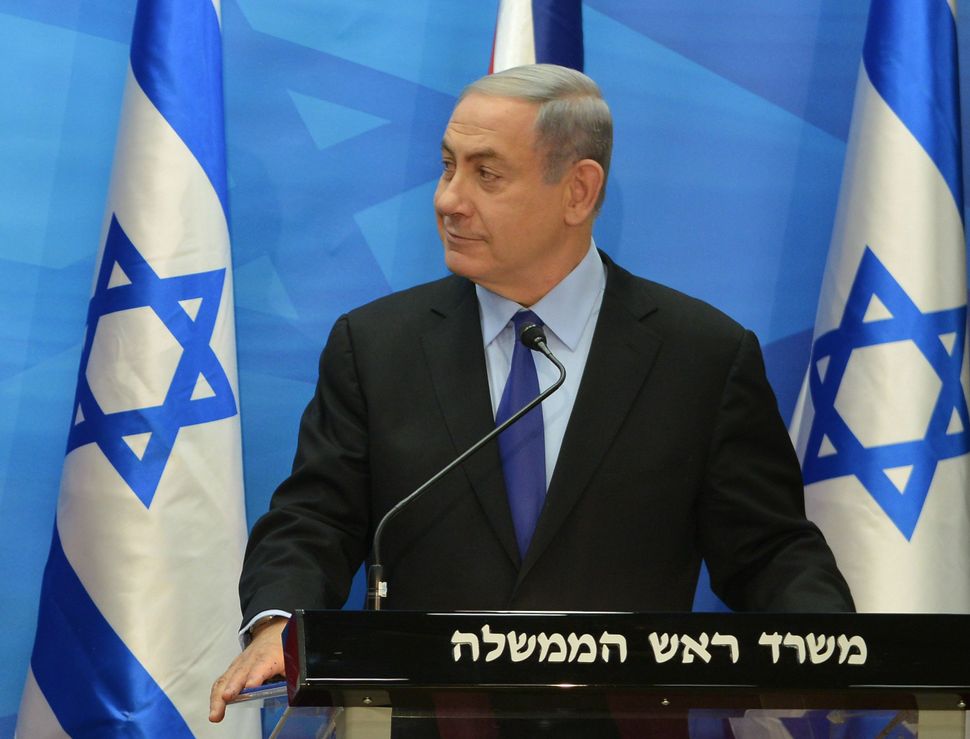 That was the question many in Israel were asking Sunday morning after Prime Minister Benjamin Netanyahu reportedly threatened to bring down his own government to cancel reforms to state media. According to Hebrew reports, Netanyahu told ministers Saturday that unless the creation of a new government-funded broadcaster is aborted, “we’ll go to elections.”

Netanyahu ignored questions about the reported comment as he boarded a plane for a diplomatic visit to China Saturday evening, and his office declined JTA’s request for comment.

Netanyahu and Finance Minister Moshe Kahlon have publicly clashed for months over the planned launch of the new broadcaster, which was supposed to be more politically independent than the current one. After supporting the 2014 legislation to create “Kan,” Netanyahu led efforts to bury it. Kahlon has insisted that Kan move forward.

On Thursday, hours after Kahlon announced a public break with his longtime ally Netanyahu over the conflict, the two Likud party ministers reached a compromise that would have seen Kan go ahead on April 30. Netanyahu would have agreed to drop his opposition in exchange for Kahlon’s support for legislation that would give the government oversight of all television and radio stations in the country.

But then, in a Facebook post Saturday, Netanyahu said he had “changed his mind,” leaving observers to puzzle over why the prime minster, a master of political survival, would risk his perfectly good right-wing government over the reforms. These are some theories being discussed in Israel.

On Facebook, Netanyahu attributed his about-face to the “heartbreaking stories” he heard when he met Friday with employees of the current broadcaster, called the Israel Broadcasting Authority. Some 1,000 employees were to lose their jobs when it closed, and many have been protesting. Netanyahu also cited estimates that it would be cheaper to fix the existing broadcaster than to start the new one. “So, what do we need the [new] corporation for?” he asked.

But treasury department statistics contradicted Netanyahu’s price estimates. And few Israelis believed that he suddenly developed a soft spot for Israel Broadcast Authority employees. After all, in the past, he has criticized them as left wing and supportive of terrorism.

On Thursday, Finance Ministry sources told Hebrew media: “Netanyahu seems to have forgotten who called them Hamas members and legislated a law limiting their absorption into the [new] broadcaster.

He fears the wrath of Kan

Both critics and allies have suggested Netanyahu opposes new broadcaster because he fears it will turn against him. David Bitan, the chairman of the ruling coalition, in November said Kan had already been “hijacked by people whose agenda is leftist and anti-government.”

The broadcaster has already been staffed and said it was ready to go on air at the start of this year.

In August, Netanyahu himself reportedly asked TV and radio employees of the Israel Broadcasting Corporation a rhetorical question: “What if everyone in the [new] corporation were from [left wing veterans’ group] Breaking the Silence?”

But some commentators have argued Netanyahu’s alleged desire to control coverage cannot explain his threat to call new elections because he could not really expect any future government to help him quash Kan either.

“First of all, let’s make clear that in any case, the [new] corporation will not shut down. With or without elections, it will launch television, radio and digital broadcasting on April 30, and the Israel Broadcasting Authority will cease to exist,” Yossi Verter wrote in Haaretz Sunday.

He is trying to avoid being indicted

Police have questioned Netanyahu four times as part of two corruption investigations. Although Netanyahu has repeatedly said of the investigations, “There will be nothing because there is nothing,” some have speculated that he may want an excuse to call new elections to prevent the police from recommending an indictment against him — something they would customarily refrain from doing until after the polls close.

Political analysts on Israel’s Channel 2 TV news suggested the investigations could be a motivating factor for the prime minister. But Netanyahu must know that after the elections, there would be nothing preventing the wheels of justice from moving forward, and all the more easily if he were no longer the prime minister.

He wants to bring his coalition to heel

Netanyahu’s coalition has looked increasingly unruly of late. In addition to Netanyahu and Kahlon’s falling out, Knesset member Yehuda Glick on Thursday posted a 700-word treatise on Facebook despairing at what he said was a culture of fear in his Likud party.

Earlier in the week, Education Minister Naftali Bennet and other members of the government publicly sparred with Avigdor Liberman over his threat to cut state funding for a pre-army military academy in the West Bank settlement of Eli if the controversial rabbi who heads it did not step down. The week before that, Transportation Minister Yisrael Katz and Knesset member Avi Dichter both said they would run for prime minister once Netanyahu was out of the picture.

Those are just a few examples. Many interpreted Netanyahu’s threat to call elections as a bid to restore order. On Sunday, supporters and critics differed only on how likely he was to succeed.

In Israel Hayom, Mati Tuchfeld credited the prime minister’s leadership under challenging conditions. “It’s not just the broadcaster and it’s not just Kahlon,” he wrote. “It’s also Naftali Bennett, who just a couple of days ago said that Netanyahu has neglected religious Zionism. It’s also Liberman, who though he appears Netanyahu’s most trusted partner, nonetheless his comments about closing the yeshiva in [the West Bank settlement of] Eli sent the prime minister down a dead end.”

On the other hand, Nahun Barnea concluded in Yedioth Aharanoth that Netanyahu was doomed to “self-destruct” in his forth term in office, much like his former British counterparts, Margaret Thatcher and Tony Blair.

His wife and son told him to

Finally, some blamed the woman Israelis love to hate, Netanyahu’s wife, Sara. Sima Kadmon wrote in Yedioth Aharanoth that Sara Netanyahu demanded her husband take action because of her dislike for certain journalists hired by Kan.

“It’s clear to everyone close to the prime minister that something is going on when Netanyahu is susceptible to the influence of his relatives,” she said. “Ladies and gentlemen, wake up. This is your prime minister.”