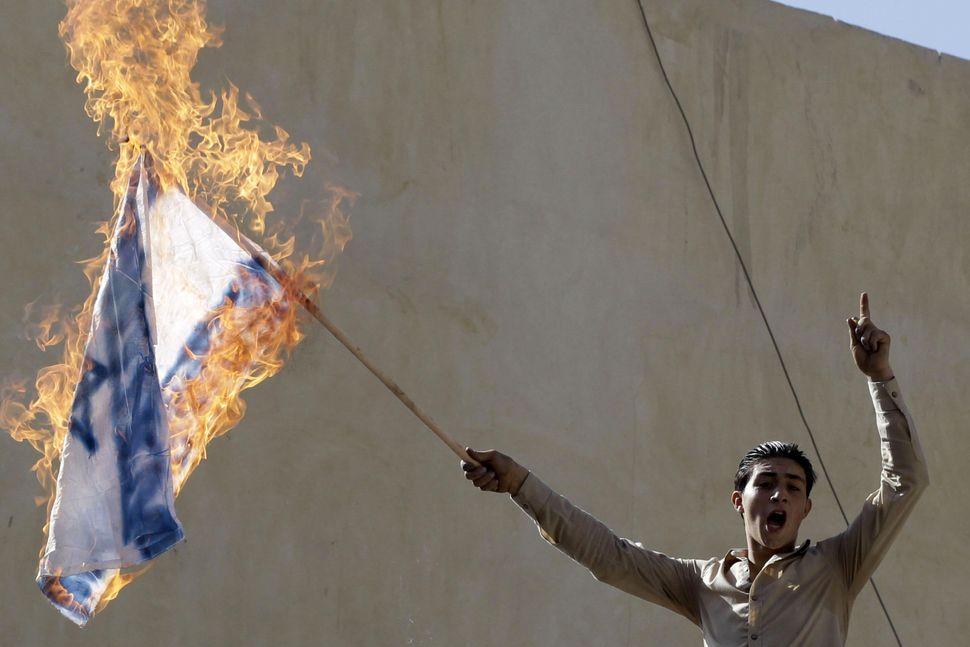 On March 12, 2017, Ahmed Daqamseh, the Jordanian soldier who had murdered seven Israeli schoolgirls in 1997, was released from prison. One would have expected to see him regret his horrible crime, and the people around him to express remorse for his victims — as the late Jordanian King, Hussein, exemplified 20 years ago when he declared, “My loss is your loss.”

Sadly, however, that was not the case. Some Jordanians welcomed Daqamseh home as a hero, meeting him with cheers. When he spoke to the media in his village, he justified the massacre he committed, calling Israelis “human waste.”

With all that, Daqamseh’s release from prison illustrated a disturbing reality: the normalization of hate and the de-humanization of enemies. Every nation praises its heroic soldiers for fighting the enemy and winning victories. To praise a man who killed seven children, however, is something else. It is a pathological enmity that corrodes basic decency.

I see this problem all across the world’s most troubled region — the Middle East. It is, in a nutshell, a culture of hate. It designates enemies, and defines them not as human beings with conflicting goals and interests, but rather as the incarnations of evil. These are the kind of enemies you can only eradicate, not potentially make peace with.

I come from Turkey, which is not exactly a part of the Middle East, but not totally apart from it either. Unfortunately, Turkey is deeply affected by the culture of hate as well, which comes out often not as physical violence, luckily, but as a vitriolic political mindset and language. The objects of hate can be other nations – Greece, Russia and Iran have taken turns as targets – but more often other socio-political camps within the nation itself. That is why Turkish politics is a never-ending brawl, where opponents are maligned as “enemies within” that deserve to be crushed, not compatriots with opposing viewpoints.

It cannot not be denied that this prevalent culture of hate in the Middle East has something to do with the prevalent religion of the region: Islam. No wonder the objects of hate often get defined in religious terms: infidels, heretics or the munafiquun — the Qur’anic term for hypocrites. It is also amplified with a self-righteous claim to be the “real Muslims,” or the real “party of God” — in Arabic, Hezbollah.

This has led some non-Muslim observers of the region to assume that Islam, inherently, is a religion of hate — and conflict and violence. In my view, however, they are getting the causality wrong. It is not that Islam has produced a culture of hate in a region that otherwise would be more moderate and mature. It is rather that the political traumas of the Middle East since the late 19th century — colonialism, occupations, wars, despots — produced a culture of hate, and that culture has opted for, and amplified itself through, a more bigoted and militant interpretation of Islam.

Like most other religions, the basic texts of Islam include teachings that advocate peace, compassion and coexistence, along with teachings that advocate war, revenge and triumph. Moreover, the 14 centuries of the Islamic civilization include remarkable episodes of tolerance. Jews, in fact, more than anyone else, can testify to that: When European countries, such as Spain and Portugal, persecuted them as “killers of God,” Islamic lands, such as the Ottoman Empire, offered them refuge.

One of the great scholars of the Middle East, Bernard Lewis, once pointed to the tapestry in Islam in his much-discussed 1990 essay, “The Roots Of The Muslim Rage.” “There is something in the religious culture of Islam,” Lewis first observed, “which inspired, in even the humblest peasant or peddler, a dignity and a courtesy toward others never exceeded and rarely equaled in other civilizations.” However, he added, “In moments of upheaval and disruption, when the deeper passions are stirred, this dignity and courtesy toward others can give way to an explosive mixture of rage and hatred.”

The bitter fact is that we are now in a moment of “upheaval and disruption,” and the “deeper passions” are indeed stirred in many parts of the Muslim world. The result is rage and hatred against “the other,” which can be Westerners, “Crusaders,” Jews, or just Muslims of a different persuasion.

What does this mean for those others? Should Westerners — or Israelis — just deem Islam as their enemy and prepare themselves for an inevitable “clash of civilizations”?

What is rather needed is to heal the culture of hate, wherever it exists. And as we probably all know, it exists not just among Muslims, but elsewhere as well — as evidenced by a spate of hate crimes and vitriolic language against Muslims, rightly termed “Islamophobia.”

To heal this culture of hate, on the Muslim side, much responsibility lies in the hands of Muslim opinion leaders. They should use their moral authority to call on Muslims to critically look at themselves, to explain their current malaise, rather than putting the blame on the outsiders.

The outsiders, on the other hand, should do better than condemning the essence of Islam. Rather than closing the gates and getting into the trenches, they should engage in a constructive dialogue.

Mustafa Akyol is a visiting fellow at the Freedom Project at Wellesley College and is the author, most recently, of “The Islamic Jesus: How The King Of The Jews Became A Prophet Of The Muslims(St. Martin’s Press).”