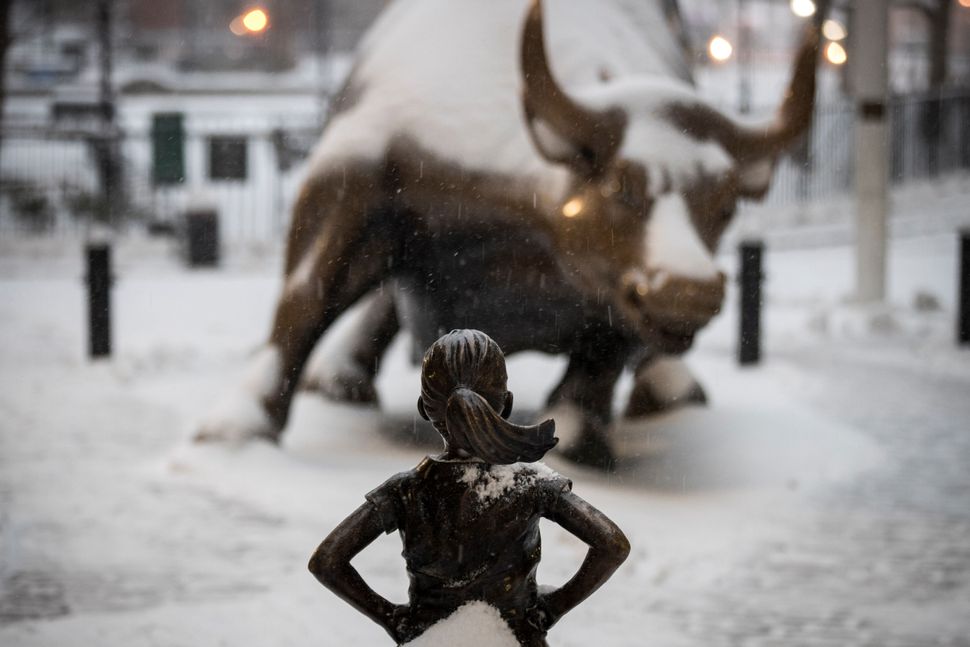 For two decades, I’ve passed “Charging Bull,” the iconic bronze statue that stands near Wall Street, twice every workday when I walk from the Staten Island Ferry to my office in Manhattan. Now, I have to pass her too.

I was never particularly fond of the beast, which always struck me as a bronze descendant of the Golden Calf. Now ‘Fearless Girl,” a new statue of a young lady in high tops who leans in defiantly just a few feet from the bull’s horns, leaves me equally unimpressed.

While I sympathize with Arturo Di Modica — the artist who sculpted the bull who argues that his symbol of a robust economy has been transformed, by the little girl’s juxtaposition, into a representation of sexism — what really bothers me is the symbolism intended by her very placement.

Because if both figures somehow magically came to life, the result would not be pretty.

The girl’s sponsors, and the tourists who gather and kvell at the new sculpture, taking photos and imagining that they are advancing the cause of womanhood, are fooling themselves. The girl is no match for the bull. And – please forgive my blasphemy – women as a group, no matter how hard we work to advance their status in society, are no less likely to overcome the gross sexism of men as a group.

Modern feminism is several decades old and Western society is, at least ostensibly, committed to women’s equality. Yet, statistics and common experience alike paint a disturbing picture, with “good old boys” in the business and professional worlds usually still pulling the strings, and the vast majority of women settling in the end for less.

Don’t get me wrong. The fight for women’s dignity — their rights to equal pay for equal work and quest to be seen as people and not as objects — is a just one. But fomenting the myth that it’s a fight that, with sheer determination and spunk, can actually be won will only lead to disillusionment. The flesh-and-blood little girls whose parents take them to see “Fearless Girl,” and point to her as an inanimate but meaningful role model, are setting them up for a letdown.

Think we’ve made great progress convincing men that women deserve respect? Well, why, then, are their bodies still being used to sell everything from beer to BMWs? Why has acquaintance rape become commonplace? Why do women as a whole, in fact, make less money than men? Why, for that matter, does the bank that installed Fearless have only five women among its 28 top executives?

Why does domestic violence persist and even seem to be increasing — and why are women almost always on its receiving end? Does the “entertainment” industry tout or torpedo women’s dignity by reducing them (even with some female entertainers’ collusion) to the sort of gross, sex-obsessed neurotic louts that more traditionally characterize some men?

There is a Yiddish saying: Es is shver to zayn a Yid — “It is hard to be a Jew.” There’s truth to it, to be sure. But I think it’s even harder, even (maybe especially) in our supposedly “enlightened” Western world – leave alone the large majority of less-progressive societies – to be a woman.

That, in fact, is what I have in mind every morning when I recite the list of blessings thanking G-d for His kindnesses, and include “… Who has not made me a woman.” I have never regarded that blessing, as some sneeringly do, as demeaning. Instead I see it as descriptive of a sad truth: women don’t have it easy in the world. They are (with all due respect to “Fearless Girl” and her admirers) more vulnerable, more mistreated, more disrespected, more demeaned.

In recent years, a handful of memoirs have been written by ex-haredim, some of them women who found Orthodox life constraining or worse. I would never disparage anyone for their personal choices. But I know that a very different – and I believe more accurate – picture emerges from an objective examination of haredi life. The traditional gender roles and large families that some find shockingly sexist are seen by those embracing them – men and women alike – as fulfilling in ways that I believe no typical successful CEO finds his (or her) life to be.

People who think that women are less honored in the “ultra-Orthodox” world than in the ultra-secular one (hey, labels work both ways) are mistaken. They see gender roles as something evil. But were they to objectively regard haredim’s lives, they would recognize that roles are what truly liberate women, and men. Literal equality is for algebra, not people.

The exodus from Egypt, the Talmud teaches, took place only because of the “righteous women” of that Jewish generation. They didn’t fight bulls, or even Pharaoh. What they did was insist – against the conclusion of their husbands that there was no Jewish future – on leaning in to the task of becoming mothers. They engaged, our tradition teaches, in beautifying themselves in order to entice their husbands into intimacy, so that there would be a new Jewish generation to persevere and, eventually, enter the Holy Land. We think of feminists today as people who eschew gender roles. The Jewish women in Egypt were feminists of a different sort — women who embraced their femininity and aspired to the leadership that is motherhood.

Avi Shafran blogs at rabbiavishafran.com and serves as Agudath Israel of America’s director of public affairs