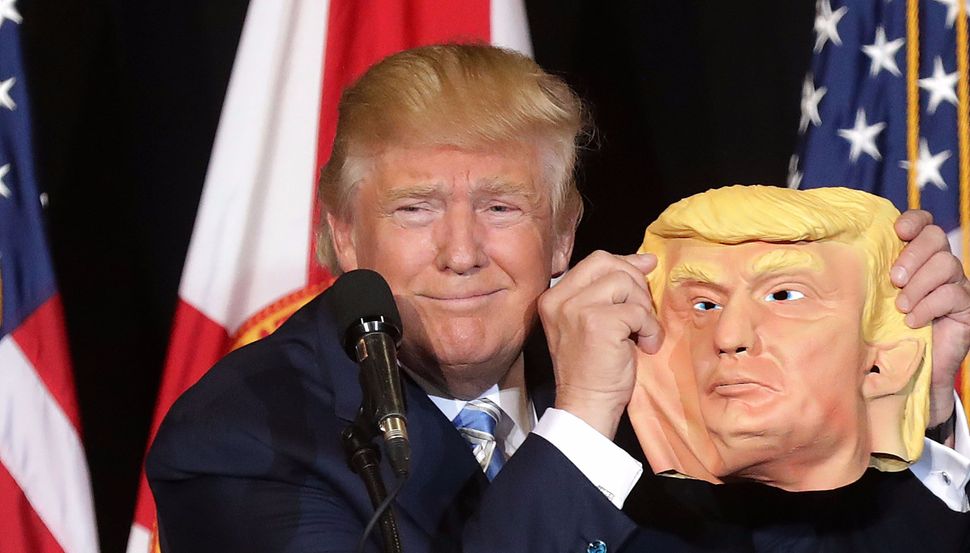 As the politically liberal member of a conservative family, she had been comfortable sparring with her relatives during the Obama administration. But as Thanksgiving approached, she found it hard to get over the fact that her parents had voted for Trump. During one particularly painful phone call, a tearful Katz told her mother she wasn’t sure she would ever look at her the same way again.

The problem was particularly pointed for Katz, who co-founded Ask Big Questions, a Hillel International initiative that teaches  how to have productive conversations about tough issues. She applied the organization’s lessons to her own family, which has gradually returned to talking politics after avoiding the topic over Thanksgiving dinner, which Katz attended.

Next week, Katz will be back for her family’s Passover seder — but this time she’s excited.

“I expect politics to come up at some point, even when people are choosing what to put on television, which news station,” she said. “But I’m excited to have the seder. If we can each take a deep breath before we go into this and be ready to be open enough to really fully accept the viewpoints at the table without trying to change them right away, I think we can have a really wonderful Passover seder.”

Katz isn’t the only one whose family is riven by politics.

A Reuters/IPSOS poll in January showed that more than one-third of Americans have argued with a family member or close friend about the 2016 election, while one in six have stopped talking to a friend or family member entirely. With Passover among the most widely observed Jewish holidays, the seders will be rife with the risk of a political conflagration.

“We didn’t usually have campaigns that were so openly about putting the other candidate in jail or where hate talk, either open or veiled, was such a continuous thing,” said Andra Medea, author of “Conflict Unraveled: Fixing Problems at Work and in Families.” “It isn’t just the usual cast of winners and losers. For the first time that I’ve seen in awhile, you have whole blocs of the population that actually feel afraid.”

Seders traditionally embrace disputation. The meal’s most known segment is the Four Questions, and several of the Haggadah’s anecdotes retell rabbinic debates. Haggadah commentaries likewise nudge attendees to challenge the details of the hours-long Exodus narrative.

Noam Zion, co-author with his son Mishael of “A Night to Remember: The Haggadah of Contemporary Voices,” says the original seder was not meant to be a rote reading of the Haggadah but a free-willing symposium on themes of freedom and slavery.

But debating the merits of Rabbi Yosi vs. Rabbi Eliezer is one thing; debating current events is another.

Rabbi Josh Feigelson, the executive director of Ask Big Questions and a co-founder, said the Haggadah can also encourage healthy conversation, structuring the discussion and giving everyone a chance to participate. Worst case, a tense exchange can be ended by moving to the next page.

“The idea of having a shared text, that’s an incredible thing,” Feigelson said. “It makes it democratic. It means everyone has access.”

Medea, who has written extensively about conflict, suggested avoiding political conversation at the seder, using the text as an opportunity to recall moments of family resilience instead of debating the contemporary political implications of slavery and plagues.

“Having the adults get together and fight amongst themselves is a dreadful thing for kids,” Medea said. “Adults can at least agree on, ‘Grandma really had it together.’”

For Jeremy Saltan, an American-Israeli political operative and commentator associated with Israel’s Jewish Home party, Passover is one time he hopes not to ply his trade. His seder will feature someone on the rightward fringe of Israeli politics as well as an activist who has gone to Gaza to support the Palestinian cause.

Saltan would prefer Jewish religious discussion to politics, but he quipped that he might take refuge in another component of the seder.

“Four cups of wine — that seems like the best way to get through that,” he said. “One of the things people need to understand is, when at the seder table or anything else, family is family. You’re still going to have to see these people. You have to have your own coping mechanism in terms of getting through.”

Feigelson said the best way to ensure a healthy conversation is to agree on topics and rules ahead of time — and to stick to them when things get awkward. His organization suggests avoiding conversations on complex topics that are likely to be dominated by one or two people. Instead, true to its name, the group advocates asking big questions everyone can answer, such as “When have you been free?”

“Being able to set some kind of ground rules or intentions about what we want for the seder and what kind of discussion we want there” is crucial, Feigelson said. “If discussion does move to places where there’s not a whole lot of room to maneuver and it’s not reflecting a spirit of wonder and curiosity and generosity, the No. 1 rule is to acknowledge it and name it.”

That’s going to be Katz’s tactic as she sits down at the seder table. She thinks it will work out. But even if it doesn’t, she knows she has no choice but to keep trying.

“I’m going to listen now and I’m going to be open enough this year to what my family has to say,” she said. “I won’t interrupt. It’s either to remove yourself from your family or continuing to engage.”