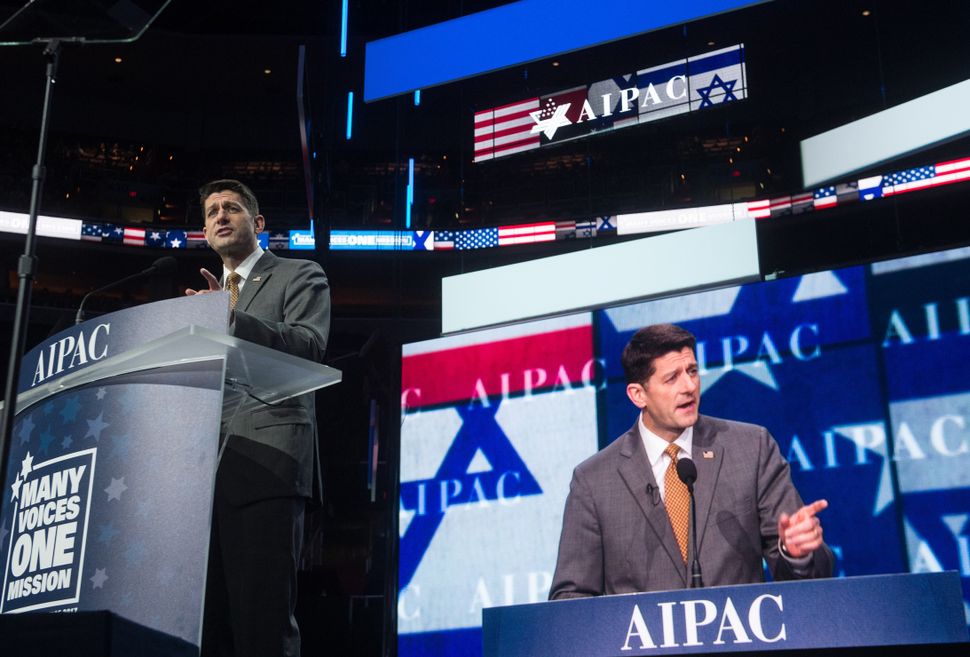 It was not that long ago that The American Israel Public Affairs Committee (AIPAC) played a leading role in the political drama of the day. AIPAC Policy Conference, the largest annual gathering of pro-Israel advocates and supporters in Washington DC did not skip the presidential campaign season last year. Bernie Sanders made news by not showing up. Donald Trump, back then one of the Republican nominees, attacked President Obama aggressively causing AIPAC’s leadership to apologize the following morning on the main stage for a protocol breach.

But we now live in Trump’s world. As AIPAC Annual Policy Conference took place this past week in Washington, we should all wonder what is the future of the organization given the pro-Israel environment on the Hill and in The White House?

During the Obama Administration, the annual Policy Conference put pressure on the White House to support foreign aid to Israel and reject the U.S.-Iran deal, adopt anti-boycott legislation, help Israel in its fight against terrorism, and allow the Israeli Government to negotiate a peace agreement with the Palestinians on its own terms with no external pressure.

The points of tension between the two nations, such as the Iran deal and the status of the settlements, are fading. While Congress recently has been drafting legislation of additional sanctions on Iran, this topic no longer exclusively dominates the agenda of U.S.-Israel diplomatic and policy meetings. It has also been reported that the Israeli and U.S. governments have agreed on terms for construction in large settlements.

Since U.S.-Israel Memorandum of Understanding that provides Israel with significant military foreign aid for the next 10 years has already been signed by the Obama Administration last year, and Trump publicly supported Israel on most other matters, what is left for AIPAC to do in the years ahead?

I would argue that the significance of the conference and the future of AIPAC does not depend on traditional security and strategic concerns. In a world where orthodox Jews in America tend to support Israel unconditionally and many liberals are disengaging from the Jewish state, AIPAC can engage in traditional Jewish diplomacy, bringing the various parts of the fractured community together, and highlight issues that are critically important for our future.

First, in times of anti-globalization and retreat from free trade, U.S. economic policies globally and towards Israel can be critical. The Israeli economy is dependent on foreign trade and global export, and the U.S. is Israel’s largest export market. New bilateral free trade agreement can be an important step. The U.S.-Israel Free Trade Agreement was the first to be signed in 1985 by a U.S. Administration and served as a blueprint for other bilateral trade agreements. As Trump promotes bilateral agreements instead of regional and multilateral initiatives, such as TPP and NAFTA, there is a need to adjust America’s outdated trade pact with Israel to respond to new foreign investment trends and the burgeoning energy industry in Israel.

Also, there is a growing tension between Jewish Trump supporters and Republicans who are concerned about the rise of anti-Semitism in America. It is important to see whether AIPAC leadership will play a role in criticizing the Administration publicly for its response to anti-Semitism. We should follow closely proposed bills, such as the Anti-Semitism Awareness Act of 2016, which broadens the definition of anti-Semitism to include, for instance, anti-Israel expression on campus.

Third, as Netanyahu just returned from an important state visit to China, U.S. officials may be concerned about Israel being too close to the Chinese leadership, as the U.S. and Chinese governments publicly disagree on wide range of issues from North Korea to trade policies. While Israel and China define their partnership as an “innovation alliance,” it may also include strategic and security elements in the future. AIPAC can be the appropriate platform to set the tone for the desirable U.S.-Israel-China triangular relationship in times when the U.S. and China are heading towards a potential trade war.

Finally, AIPAC has been using its platform to introduce American Jewry, and the United States in general, to many Israeli technologies that are changing global industries and solving some of the worlds’ most critical human problems. Mobileye, which was just sold to Intel as part of its role in the driverless cars movement, is one of the leading examples. AIPAC also regularly features Israel’s water and agriculture innovators.

While AIPAC does address many of these new emerging areas, such as economic policies and Israel-Asian alliances, in its annual conferences and other functions, and continues to educate its supporters, it will have to elevate its importance on the policy and advocacy sides to strengthen its market relevance.

U.S.-Israel landscape is changing. And AIPAC must change with it.

Efraim Chalamish is an international economic law and business professor, media commentator, and a partner with Forward Advisors LLC.