Why Can’t This White House Get The Holocaust Right? 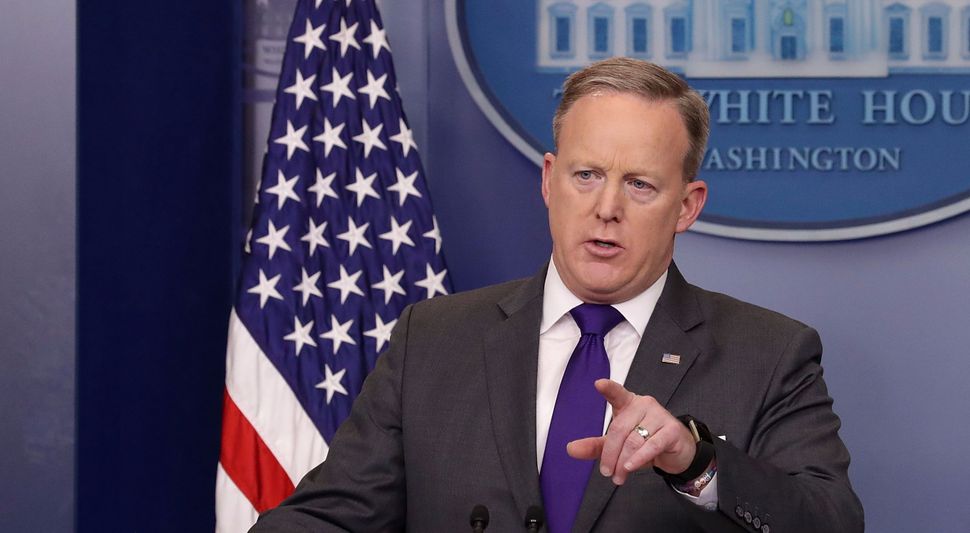 (JTA) — We interrupt this Passover to bring you two news bulletins:

Bashar Assad is worse than Hitler.

The “Soup Nazi” was almost a real Nazi.

Let’s start with the second revelation, since Sean Spicer’s Hitler gaffe about Hitler is probably better known. Entertainment Weekly reported that, according to a former writer-producer for the sitcom “Seinfeld,” the dictatorial chef known as the Soup Nazi in a 1995 episode was almost given a much darker backstory.

“We joked a whole bunch about an end scene that would take place in the jungles of Brazil, a la ‘The Boys From Brazil,’ where the Soup Nazi would return to the other Nazis — the actual former Nazi war criminals — with his soup recipes,” David Mandel explained. “It was sort of half-serious, half ‘Should we do this?,’ half ‘We’re never going to do it.’ But it was much discussed. Going down a river and seeing lots of young boys with blue eyes from experimentation with the soups — it was a full coming-together of soup and Nazi. Probably just as well that we didn’t do that one.”

“Probably just as well that we didn’t do that one” is probably a phrase the White House press secretary would love to be saying about now after three days of apologizing for having claimed that Adolf Hitler never used chemical weapons. Discussing the Syrian dictator Assad’s sarin gas attack on the Syrian town of Khan Sheikhoun, Spicer asserted, “We had someone as despicable as Hitler who didn’t even sink to using chemical weapons.”

The reaction, starting with gasps from the assembled press corps, was swift and withering. Yad Vashem said Wednesday that Spicer’s “inaccurate and insensitive” comments “strengthen the hands of those whose goal is to distort history.” The American Jewish Committee’s CEO David Harris offered, “What did the Nazis use to exterminate millions of Jews if not chemicals in their death camps?”

Spicer responded with a few stabs at clarification that can only be described with the Yiddishism “funfering.”

“He was not using the gas on his own people, the same way that Assad was doing,” the press secretary said. “There was not — he brought them into the Holocaust centers, I understand that. But I’m saying, in the way that Assad used them, where he went into towns, dropped them down, to innocents — in the middle of town.”

Eventually, Spicer told CNN’s Wolf Blitzer, the son of Holocaust survivor parents, that he was sorry for his “inappropriate and insensitive reference to the Holocaust, for which frankly there is no comparison. And for that I apologize. It was a mistake to do that.” The next day Spicer said that he “let the president down.”

Any phrase that includes some version of “even Hitler” is not going to end well. Either you will wind up diminishing the horrific acts carried out by the Nazis or will exaggerate the sins of your intended target. Spicer ended up doing both.

If his point was that “even Hitler” didn’t use gas in the battlefield, his elision of what went on in the “Holocaust centers” — better known as the death camps — would seem to raise Hitler a notch on the morality scale. Maybe worse was his comment that Hitler “was not using the gas on his own people.” That is not only false but insidious — as if the 160,000 or more German Jews killed in the Holocaust were the alien “state subjects” that the Nuremberg laws said they were.

Spicer’s comments also seem of a piece with the White House’s inexplicable omission of the word “Jews” from its statement on International Holocaust Remembrance Day. What the two missteps share is the effect of “normalizing” Hitler and the Holocaust. Intentionally or not, this is the message of both statements: “Yes, it is a horrible thing that people died at the hands of the Nazi regime, and in such numbers. But it wasn’t just Jews who were targeted and lost, and even Hitler had limits on the tactics he would use to vanquish his enemies.” In essence, Hitler was bad, but he was no Hitler.

Someone at the White House either doesn’t understand the unique aspects of Hitler’s genocidal “Final Solution,” or finds it ideologically or politically convenient to ignore them.

As for inflating Assad’s crimes, arguing that the Syrian’s use of sarin in the battlefield makes him worse than Hitler is not just a debating point for scholars and historians. Such a stark comparison demands an equally stark reaction. If the administration now regards Assad as worse than Hitler, is it prepared to carry out the kind of all-out war that defeated the Nazis? And if not, does that mean the United States is indifferent in the face of Nazi-like atrocity?

Of course, Assad has carried out atrocity after atrocity, killing hundreds of thousands of men, women and “beautiful babies” with barrel bombs, cluster munitions and incendiary weapons. The West may yet be judged by its failure to intervene and put a stop to the slaughter, but the United States and its allies have neither the stomach nor popular support for the massive intervention that would entail. In this case, as in so many others, Nazi comparisons raise the stakes without clarifying a thing.

The “Soup Nazi” episode of “Seinfeld” was criticized at the time for trivializing the Holocaust. If a chef could be labeled a Nazi for demanding discipline from his would-be customers, the critics argued, then the word “Nazi” has been drained of all meaning.

But “Seinfeld” was a satire, and the joke was on the shallow cast of characters who would blithely use the term “Nazi” to describe someone they found disagreeable. The show’s writers understood that it was a ridiculous conceit (and realized, too, we’re now told, that there were limits to how far they could push the joke). And in understanding the weight of the term, they reinforced the idea that “Nazi” describes the apotheosis of evil, not just another form of it.

It’s a lesson Spicer might want to take back to his colleagues on Pennsylvania Avenue.

Why Can’t This White House Get The Holocaust Right?