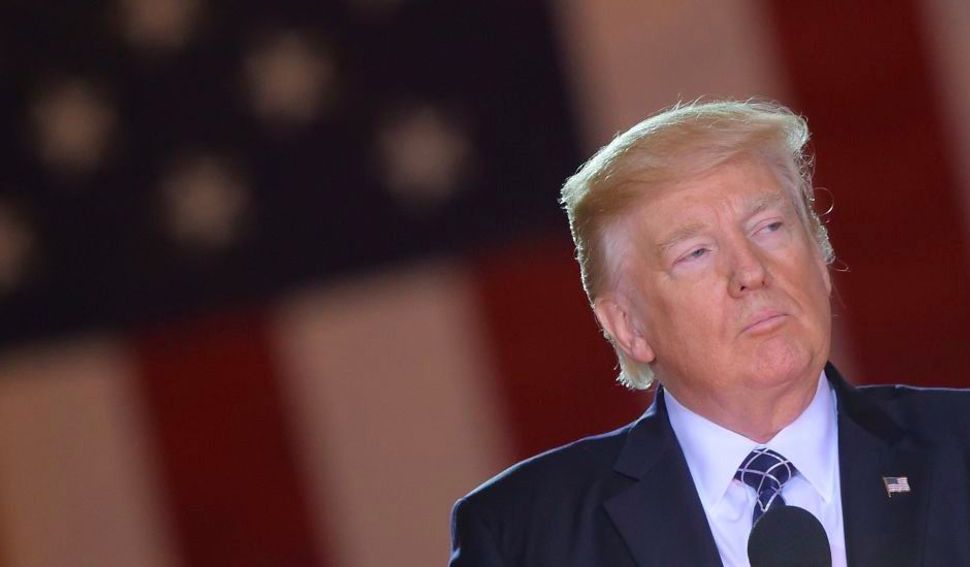 Donald Trump ended his speech yesterday at the United States Holocaust Memorial Museum by talking about Gerda Weissmann Klein. For good reason; hers is an amazing story. While being liberated by the United States Army in May 1945, Weissmann — then 21 years old, white-haired and weighing 68 pounds — met an American Jewish lieutenant named Kurt Klein. A few months later they were engaged.

Gerda’s first moment of hope, Trump said, was when she saw an American army car approach. “On its hood, in place of that wretched swastika, was a bright, beautiful, gleaming white star.”

Since Trump brought her up, it’s worth reflecting on how his views might have affected people like Gerda Klein had he been president back then. Trump’s campaign slogan was “America First.” The term comes from the America First Committee, founded in 1940 to keep the United States out of World War II. The original American Firsters were more wholeheartedly isolationist than Trump. But they shared a mentality: The United States must protect its shores and its people, not squander money and might safeguarding foreigners in distant lands.

It is this mentality that earlier this year led Trump to propose a budget that cuts U.S. funding for the United Nations in half, a cut that experts suggest could bring about “the breakdown of the international humanitarian system as we know it.” One might imagine then, that Trump would have looked harshly upon President Franklin Roosevelt’s decision in November 1943 to help establish the United Nations Relief and Rehabilitation Administration (UNRRA), which coordinated “measures for the relief of victims of war.” By 1947, UNRRA was running 800 displaced persons camps.

Their inhabitants included many of Gerda Klein’s fellow Holocaust survivors. Barely any of them were American citizens. Yet the United States paid most of the bill. Trump would likely have seen it as a prime example of other countries ripping America off.

Helping administer those camps was the United States Army. This obligation didn’t thrill military leaders, who saw their budget shrink once the war was over. Things got worse in the summer of 1946 when anti-Semitic pogroms in Poland sent tens of thousands of Jews streaming across the border into U.S.-administered DP camps in Germany. The United States government tried to keep these illegal immigrants out. But under pressure from American Jews, Washington allowed them in. Trump would surely have disapproved.

Still, the refugees couldn’t stay there forever. Unable to return to their home countries, many wanted to immigrate to the United States. But some in Congress, eager to preserve America’s cultural and religious heritage, objected to admitting Catholics and Jews. President Harry Truman disagreed. As Milan Kubic explains in The Wilson Quarterly, Truman in December 1945 ordered U.S. consulates to give people in DP camps preference when filling America’s immigration quotas.

“Visas,” he ordered, “should be distributed fairly among persons of all faiths, creeds, and nationalities.”

Still, Truman felt the quotas were too low. In his 1947 State of the Union address he said the United States had not “done its part in the admission of displaced persons.” In 1948, he told Congress “to pass suitable legislation as speedily as possible” to allow in more refugees since “we are dealing with a human problem, a world tragedy.”

Finally, in June 1948, Congress passed a law allowing 200,000 people in DP camps to enter the United States. Among them are many of the American survivors to whom Trump paid tribute yesterday. They came from regions where Communism was rife, at a time when Soviet subversion was becoming an American obsession. And Communism was particularly attractive to Jews.

Is it any mystery what Trump — who is more hostile to admitting refugees than virtually any other major American politician — would have said?

In the years immediately following World War II, the American star that thrilled Gerda Klein represented hope and dignity to European Jews not because America was inherently virtuous. Many Americans — still enamored of the philosophy of America First — resented spending money taking care of people of whom they knew nothing, half a world away. And they certainly didn’t want them coming to the United States.

What gave the star its moral meaning was the actions of particular American leaders, animated by a particular notion of America’s role in the world, leaders who believed that America’s well-being — and the well-being of the most brutalized, destitute people on earth — were ultimately intertwined.

Donald Trump rejects that view. And because he’s President, the Gerda Kleins of today are unlikely to see America’s symbols the way she did. To the contrary, refugees are literally fleeing the United States into Canada, whose leaders still believe in the principles that animated Harry Truman. Trump does not.

He praises Holocaust survivors today because it’s politically expedient. But his actions desecrate their memory. Had he more shame, he would not have spoken at the Holocaust Memorial Museum at all.

Peter Beinart is a Forward contributing editor and senior columnist. Listen to his podcast, Fault Lines, with Daniel Gordis here or on iTunes.