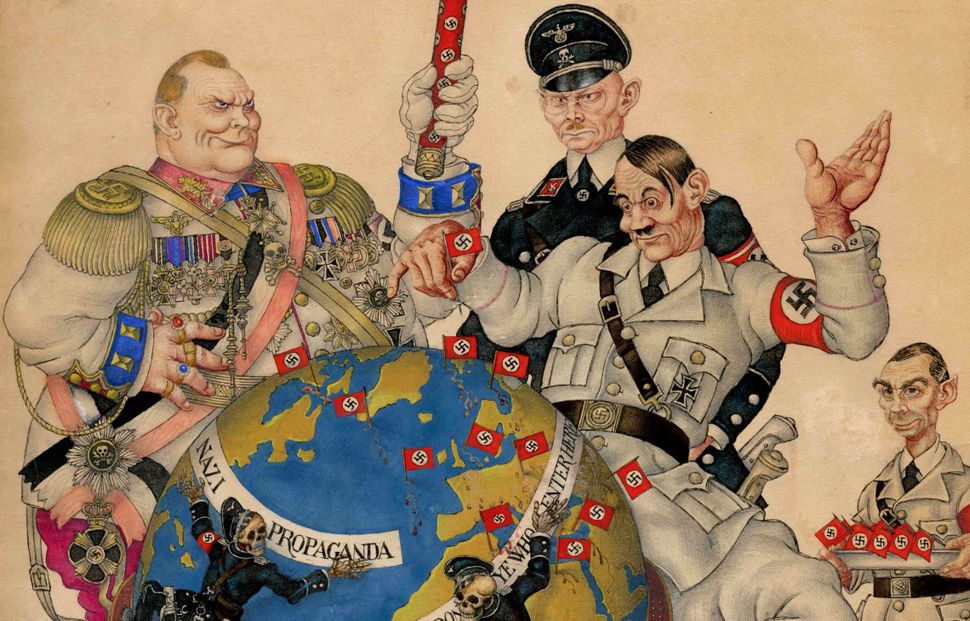 As Americans sought to understand the rise of fascism in the mid-20th century, Polish Jewish artist Arthur Szyk’s graphic commentary on the horrors in Europe was popularized in major newspapers and magazines of the day. He used his paintbrush as his sword to describe Nazi atrocities and the bravery of European Jews whose lives were threatened daily. He was driven by passion for the plight of his people, as well as moral clarity that the United States should join the Allies and intervene in World War II. 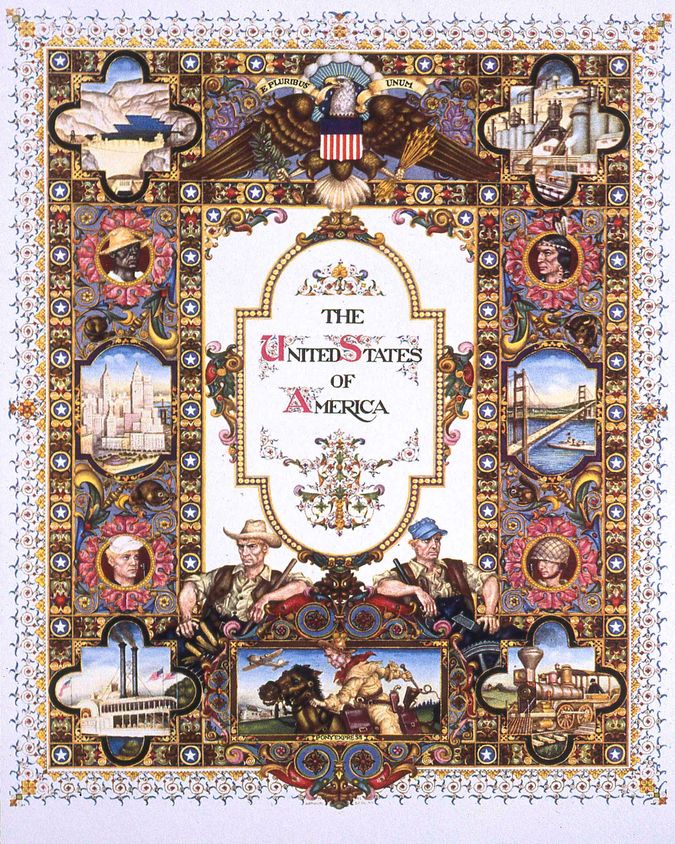 The United States of America (from “United Nations”) New York, 1945, watercolor and gouache, pen and ink and pencil on board. Courtesy
Taube Family Arthur Szyk Collection, The Magnes Collection of Jewish Art and Life, University of California, Berkeley. Image by Arthur Szyk

Using savage satire and imagery from the Old Testament, Szyk portrayed the war as a battle between good and evil. It was a message that resonated with, and could be understood universally, by the schoolteacher in Oakland, the assembly-line worker in Detroit, and the doctor in Baltimore.

With Holocaust Remembrance Week upon us, we are reminded that during World War II the American public looked to art to grasp realities – and were provoked by images to respond. As those who witnessed and experienced that era say their final goodbyes, grainy photos, historical essays, second-person accounts and the art of men and women like Arthur Szyk are all that remains.

Born in Lodz, Poland, Szyk was living in London by the beginning of World War II. He recognized the danger of Nazi Germany to the Jews, and he became a self-proclaimed propagandist, producing anti-Nazi political art. With the support of the British government, he emigrated to the United States in 1940 intent on using his craft to accomplish a political mission. He became a devout patriot for his adopted homeland, as his art provided needed context and interpretation of the horrors in his native Europe.

“Art is not my aim,” Szyk once said, “it is my means.” His messages reached millions in magazines such as Time and Look, and his interpretations of the history happening in his midst were invaluable to the war effort, rallying support for the United States to enter World War II. At a time when Hitler was still in power, Szyk boldly used his art to excoriate Nazi Germany, portray the brutality of the Holocaust, and promote the cause of the Allies.

Like Szyk, I am a Polish Jew who fled the Nazis, just before they invaded our shared homeland. I left with my family in September 1939 when I was eight years old. Soon after, in New York, my family met Szyk’s, and I was introduced to his powerful work. But his masterpieces of historical and political commentary have in recent years flown too far under the radar. It’s time for that to change.

To remember and study the horrific years before, during, and after World War II – and continue to comprehend the complex global politics of today – we must ensure access to the popular images of the time.

Until recently, the vast majority of Szyk’s works lay in a private collection – 450 pieces including paintings, drawings and sketches depicting diverse, intricate portrayals of European, American and Jewish history, and anti-Nazi political propaganda, produced over several decades. Determined that Szyk’s work not disappear once more behind closed doors when the collection became available for sale, I facilitated The Magnes Collection of Jewish Art and Life at UC Berkeley’s purchase of the collection to enable students, scholars, and the public to gain access to his art.

Today, as people and countries around the world still grapple with issues of national identity and security, Szyk’s art is as relevant in 2017 as it was in the 1940s, and it deserves a wider audience.

Arthur Szyk offers us a powerful depiction of evil and the need for strength and hope, even amid tragedy. Szyk knew that oppression is a distortion of the human experience and that art can be an antidote. I am hopeful that others will now have the chance to recognize and learn from Szyk’s contributions to art, history and our common understanding of humanity.

Tad Taube, a Bay Area business, philanthropic and community leader, is chairman of Taube Philanthropies and honorary consul of the Republic of Poland.