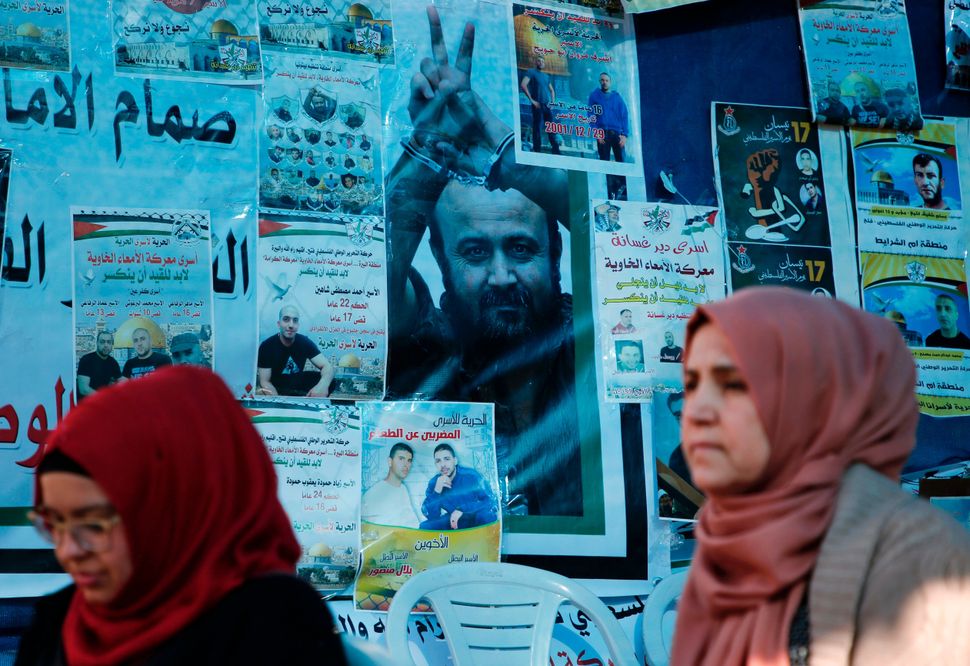 Israel’s Prime Minister has a problem with the fact that the Palestinian social affairs department pays monthly benefits to support families of prisoners. In a Facebook video timed to reach the widest possible viewership on the eve of the Abbas-Trump White House meeting, Benjamin Netanyahu called on Palestinians to stop supporting families of prisoners.

Netanyahu asked President Mahmoud Abbas – who meets with President Trump on Wednesday, April 3 – to cease the transfer of governmental monthly stipends to families of what he deemed ‘terrorists who murder Israelis’ saying, “this money provides direct incentive to commit terror.” Some reports say that Trump’s US envoy, Jason Greenblatt, has used the Israeli demands to put additional pressure on the Palestinian leadership. At a time when 1500 Palestinian prisoners are on a hunger strike since April 17th demanding basic humanitarian rights for which Amnesty International has supported. Prisoners led by jailed leader Marwan Barghouti are protesting for rights such as regular family visits, access to pay phones, improved medical services, use of books and stopping arrests without charge and trial.

Social benefits are given to families that lose their bread-winners the world over. Punishing Palestinian families will not stop their resistance but will be a clear act of collective punishment. This is not only the position of Palestinians or the text of the Geneva Conventions, it is the law of the state of Israel.

To be fair Netanyahu and his right-wing Likud government tried to do that. In November 2014, and on the behest of the prime minister a bill was tabled to the Israeli Knesset. The eight-point “temporary law’ presented by MK Yariv Lavin, chairman of the Knesset’s ruling Likud bloc, called for punishing “terrorists and their families.” Clause six of the plan states that “Anyone convicted at the end of their remand will lose their social welfare benefits.”

The bill didn’t pass the Israeli Knesset but the fact that a request was made to stop social welfare benefits from convicted persons once their detention ends means that these benefits are given to Palestinians and Jews at the end of their remand. The bill also called for deporting families of Palestinian citizens of Israel to Gaza. This also failed, as did any attempts at punishing families for the fact that their sons or daughters were convicted of violent acts.

The difference between Israelis and Palestinians is not about social stipends to families of prisoners. It is about the fact that the Israeli army has been conducting since June 1967 one of the longest periods of a foreign military occupation in defiance of the world. In the preamble of UN Security Council resolution 242 passed right after the 1967 War, all members unanimously emphasized in November 1967 “the inadmissibility of the acquisition of territory by war.” No excuses were given and no demands were made of the victims. Instead, Israeli leaders have tried to shift the blame and searched high and low for any reason or excuse not to adhere to the calls of the international community.

First it was scrubbing the PLO charter of objectionable language. That change prompted Bill Clinton to fly into Gaza to witness the new charter’s adoption. Then it was supposed incitement against Israelis in Palestinian school books, leading a bipartisan US congressional commission to vindicate the Palestinian ministry of education. Now it is social benefits to Palestinian families. How low will the Israelis go to deflect from the simply question of why they don’t want to end their occupation and illegal settlement enterprise?

Mahmoud Abbas has been the most moderate anti-violence president that Palestine has every had. He has opposed every type of violent act of resistance and has approved strong security cooperation with Israel; The country’s army and generals continue to praise PA cooperation for saving Israeli lives.

The time for excuses and obfuscation is over. Israel must conform to the will of the international community, stop illegal settlements in adherence to UNSC 2334 and offer a time table to ending the Israeli military control of Palestinian lands occupied in 1967 with a fair and a agreed to resolution of the Palestinian refugee problem. Arab and Muslim countries committed as late as March this year to normalize relations with Israel if it accepts these parameters as stated in the Arab Peace Initiative of 2002.

Israel’s Prime Minister can try to prevent world leaders from hearing the truth about its occupation. World parliaments might be pressured to legally obstruct nonviolent protests such as the Boycott Divestment and Sanctions campaign and Israel can demand that families are punished by having the small stipend, which provides food for their households taken away. But all of this political theater will not bring peace. US president George W. Bush called for land for peace. This continues to be the basis of any long-term peace agreement.

Until then, Mr. Netanyahu lay off bereaved mothers and families of prisoners.

Daoud Kuttab is an award winning Palestinian journalist and columnist with Almonitor. He is a former Ferris Professor of Journalism at Princeton University.