Can Trump’s Consigliere Jason Greenblatt Cut A Deal In The Middle East? 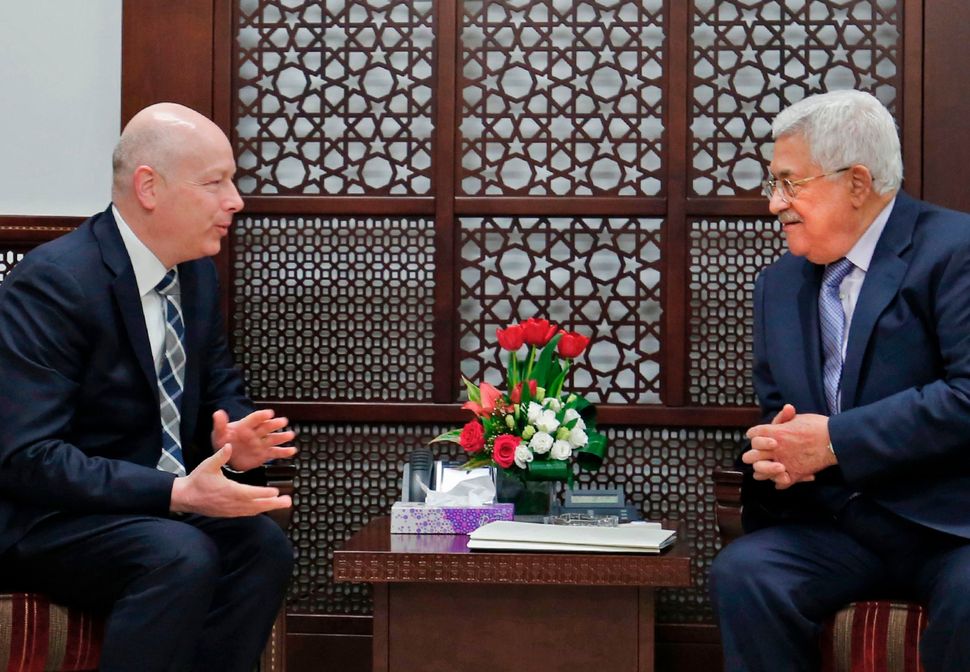 That’s how Jason Greenblatt, then Donald Trump’s in-house lawyer, described his idea of negotiating Israeli-Palestinian peace in an April 2016 interview with the JTA wire service. Just days earlier he had learned — to his surprise, he said — that he was to be candidate Trump’s chief Middle East adviser.

Trump’s naming of Greenblatt to the sensitive post seemed to be a throwaway line in what still looked like a throwaway presidential bid, but the lawyer handled it gamely. Today, nearly a year later, Trump is president of the United States and Greenblatt serves as his special adviser for international negotiations.

Greenblatt’s main task, it appears, will be negotiating the elusive Israeli-Palestinian peace deal that Trump promised to deliver. Now that Greenblatt has taken his first official trip to Israel and the territories, it’s unlikely that he still thinks “the emotional part of it and the historical part of it” can readily be removed. Emotion and history are baked into the soil of the region.

Then again, it seems clear from the context in that 2016 interview that Greenblatt was talking only about erasing emotional and historical concerns from the Palestinians’ ledger, not Israel’s. Indeed, his “emotional-historical” comment was sandwiched in the middle of a longer discussion about getting the Palestinians back to the negotiating table by threatening to withhold U.S. aid. American negotiators, he’s quoted as saying, “need to lay down the law” to the Palestinians.

There was no parallel hint of getting tough with Israel. On the contrary, Greenblatt spoke of his love for Israel. He seemed to view his new Middle East duties as an opportunity to act on that love.

He comes by that love quite honestly. Raised in an Orthodox family in Queens, Greenblatt attended both high school and college in the Yeshiva University system, with a gap year in between at a West Bank yeshiva, Har Etzion. He lives in the Modern Orthodox stronghold of Teaneck, New Jersey. He gets his information on Israel, he told JTA, primarily from three sources, all of them distinctly hawkish. One is the publication of the American Israel Public Affairs Committee. A second is the Daily Alert, an emailed catalogue of Arab and Muslim misdeeds distributed by the Conference of Presidents of Major American Jewish Organizations. The third is the weekly radio commentary of Malcolm Hoenlein, executive vice-chairman of the Conference of Presidents, who has a regular Friday morning slot on “JM in the AM,” a morning drive-time mix of Jewish music and right-wing talk that’s a fixture in the New York-area Orthodox community.

With credentials like those, it’s logical to expect that the Palestinians would be deeply suspicious of Greenblatt as a mediator. During the George H.W. Bush administrations, before Yitzhak Rabin and the Oslo Accords, Palestinian leaders used to complain bitterly in private that the American peace mediators, led by Dennis Ross, Aaron Miller and Dan Kurtzer, were all Jews with close family and religious ties to Israel. Yet they were liberals who pressed Israel to compromise. Greenblatt, with his conservative background and Orthodox affiliations, should be even more suspect.

That’s not how the Palestinians are playing it, though. In public, at least, Palestinian Authority chief Mahmoud Abbas and his aides have been surprisingly cordial toward the new American administration, describing it hopefully as an opportunity for a renewed peace process. And early signs suggest that Greenblatt, in his role as the administration’s point man on the conflict, just might rise to the occasion.

It’s important to recall that despite initial appearances, Greenblatt isn’t a clone of Trump’s other Orthodox Jewish Middle East adviser, David Friedman. The ambassador-designate served until recently as a top fundraiser for a militant West Bank yeshiva. Greenblatt, by contrast, has generally avoided public engagement with Israeli or Middle East politics. He said in the interview last year that he shares Trump’s support for a two-state solution. Friedman was a longtime, outspoken opponent, right up to the time he was picked for ambassador.

And while Greenblatt’s background, environment and reading choices all trend rightward, he appears to be approaching his current assignment not as a chance for self-expression but in his professional role as Donald Trump’s lawyer. That became clear when he and Netanyahu tried and failed during their first meeting to find a common language on the question of continued Israeli settlement construction, which Trump wants to rein in. The Israeli right, after years of clashing with ex-president Obama, was expecting to find an ally in the Orthodox, right-leaning Greenblatt. Rightists were disappointed to find that the visiting envoy was speaking on behalf of the president of the United States, not the Israeli settler movement.

If Greenblatt has a high hurdle to surmount, it’s the fact that he’s representing President Donald Trump. Mercurial, ill-informed, thin-skinned, vindictive, Trump bounces from one nonsensical thought to another like a hyperactive 7-year-old, sometimes changing his mind the next day, sometimes doubling down on the most outlandish notion and insisting the world, or at least Congress, follow his mad lead. Worst of all, Trump seems unable or unwilling to grasp the worldwide gravity of the American president’s word. At home, idiocies like the imaginary Obama wiretap can cause chaos and panic. Internationally, off-the-cuff word-bombs — like his unintended dismissal of the two-state solution — may yet cause disaster.

With all the best intentions, a presidential envoy is only as credible as the president he represents. Trump may have summed up his own addle-headedness with his February 27 comment on the Republican healthcare bill: “Nobody knew that healthcare could be so complicated.”

Actually, everybody knew it but Trump. Even worse, he still doesn’t know how much he doesn’t know. Substitute “the Middle East” for “healthcare” and you have the next crisis in a nutshell.

J.J. Goldberg is editor-at-large of the Forward, where he served as editor in chief for seven years (2000-2007). Follow him on Twitter at @jj_goldberg

Can Trump’s Consigliere Jason Greenblatt Cut A Deal In The Middle East?