How A Rock-Climbing Harness Is Like A Set of Tefillin 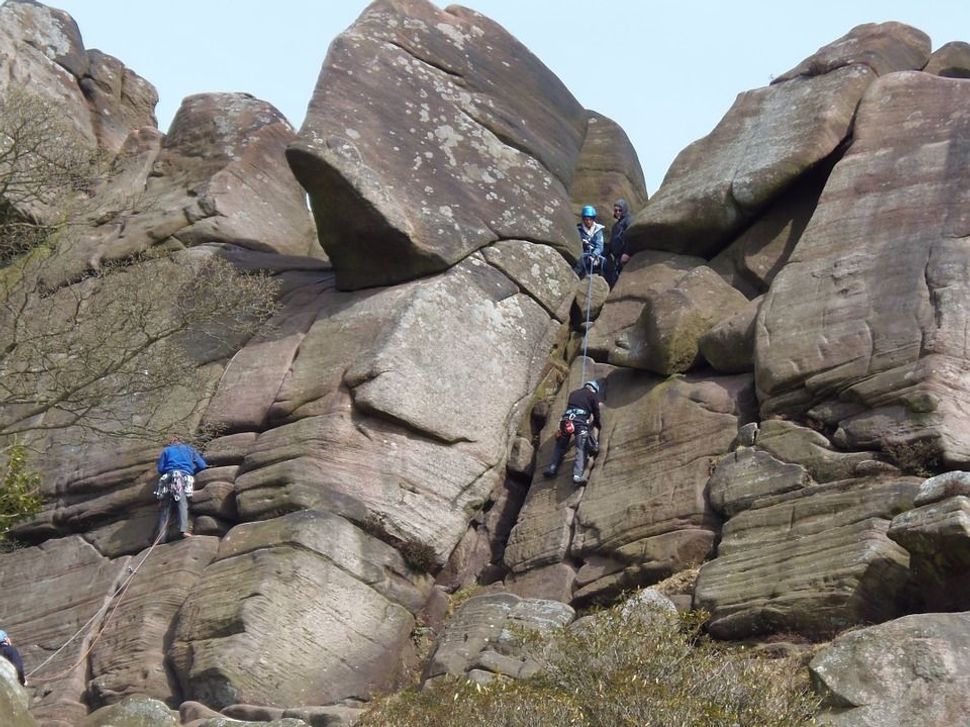 This article was first published in The Forward on May 21, 1999.

The terrain reminded me of the Negev, especially as I gazed out over it from high above the desert floor: coarse sand, prickly shrubs, sandstone cliffs. A rope was the only thing that protected me from injury or death. I was leading a rather unusual rock-climbing trip with a group of 10 Jewish high school students in Red Rock Canyon, Nev., just a 40—minute drive from the bright neon casinos of downtown Las Vegas. It was a powerful experience that can serve as a model for education members of our community about their spiritual tradition and inspiring them to live more meaningful Jewish lives.

One year ago, Bob Greenbaum and I saw a hole in Jewish institutional life and decided to create something new to try to fill it. We called our program Jewish Adventure Travel. Both of us had a good deal of experience in the outdoors and a taste for physical adventure. WE also shared a love for and commitment to Judaism and the Jewish community (I am a rabbi, and he is active in UJA—Federation and a board member of CLAL—The National Jewish Center for Learning and Leadership). Jewish life Network, where I currently work, is interested in exploring what new, intensive programs could powerfully affect Jewish values and identity. The philosophy of Jewish Adventure Travel was the same: By combining the excitement and challenge of outdoor adventures like rock climbing, kayaking, even dog sledding with informal Jewish education, we could develop trips that would connect Jews to their Judaism in ways never before possible. Not only would they help to associate Jewishness with positive feelings; they would also serve as tools for outreach to Jews who might never set foot in a synagogue or religious school.

In the morning, after hiking in with our gear to the side, we all sat down on whatever was available (mostly large rocks). We went around in a circle and introduced ourselves. Then, as Bob demonstrated how to put on a harness for the climb, I silently took out a pair of tefillin from my backpack and started wrapping the black leather straps around my arm. At first the students wondered what I was doing. But when I had finished, and they saw the parallels between our respective actions as well as their end results — Bob with the straps of a harness wrapped around his waist and me with straps of leather encircling my arm — the lesson was easy. Just as the time—tested harnesses would protect our bodies from falling to the earth as we struggled up the jagged cliffs, so can the well-practiced rituals and traditions of Judaism save our souls from falling in to the dangers of despair and cynicism as we face the trials of our lives.

Before attempting our first ascent (a trail that had a relatively modest difficulty rating), our instructor went over all of the basics of rock climbing: how to tie a proper knot, how to communicate with your partner on the other end of the rope, how to climb using legs instead of arms, and how to descend. It was at that point that I taught my initial text, a parable that was written by a chasidic master more than 100 years ago. Once, in a tropical country, a king ordered a group of his subjects to bring a rare and beautiful bird to him, a bard that was perched so high on the region’s tallest tree that no single person could ever hope to reach it alone. The subjects gathered below the tree and began to stand on one another’s shoulders, gradually making their way toward the exotic bird. But then some of those near the bottom, either out of impatience, boredom or distraction, started to wander off. The whole chain collapsed, and the bird remained out of reach. The king was disappointed, for what he desired even more than to see the bird, was to witness his people so intimately linked to one another.

I proceeded to discuss with the students how the Jewish values that were embedded in this mystical parable — the need for teamwork, the reality of independence, the importance of a strong and committed community — could be applied to the activity they were about to engage in. Without relying on a partner on the ground of physical (and psychological) support, the climber risked harm. Trust was vital to the process. And it was this process of community building, not the immediate goal of touching the top of some mountain face, that was the ultimate purpose of our desert adventure. If the king in the parable represented God, and the subjects the people of Israel, then the message of our tradition seemed to be that it is what happens to us on the spiritual journey itself that truly matters to God, not that we reach any self-imposed or superficial end result.

Despite this teaching — or perhaps because of it — every single student present successfully climbed to the top of the 5.7 trail, many of them, especially the younger ones, scrambled their way up the cliff for a few feet, struggled to find new ledges for their feet or fingers, and then said they couldn’t climb any higher and wanted to give up. But, invariably, with a little prodding from either me, Bob, or a peer, the student would eventually climb higher and higher until he or she reached the top. When the students had carefully and methodically returned to the ground, exhilaration set in. A few had climbed before and knew the sensation; they looked happy and satisfied with their efforts. For those who had never done it previously, though, the joy on their faces, and the sense of accomplishment that emanated from them, were palpable and almost overwhelming.

After the climb and a light lunch, I passed out our second set of texts for the day. I selected two passages from Pirkei Avot , the “Sayings of the Fathers.” We discussed the importance of the individual initiative and how it had to be balanced by altruistic behavior. We examined the dangers of overconfidence and of judging others. When we had finished, and they began to see connection between rock climbing and Jewish values, some members of our group decided they had had enough and rested. Others went up a second 5.7 trail that we set up, and a couple of the more ambitious students climbed the one that was 5.9. At the end of the afternoon we looked at two more texts, one from the teachings of Rabbi Nachman of Bratslav and the other from Rabbi Menachem Mendel of Kotsk. Both used the imagery of the ascent to convey their belief that strain and struggle are vital aspects of the path to spiritual maturity. As we all say there, sweating, exhausted, but with feelings of fulfillment, the words rang truer than they could have in any classroom.

Rabbi Goldstein is a program officer/educator at Jewish Life Network and the co-founder of Jewish Adventure Travel.

How A Rock-Climbing Harness Is Like A Set of Tefillin