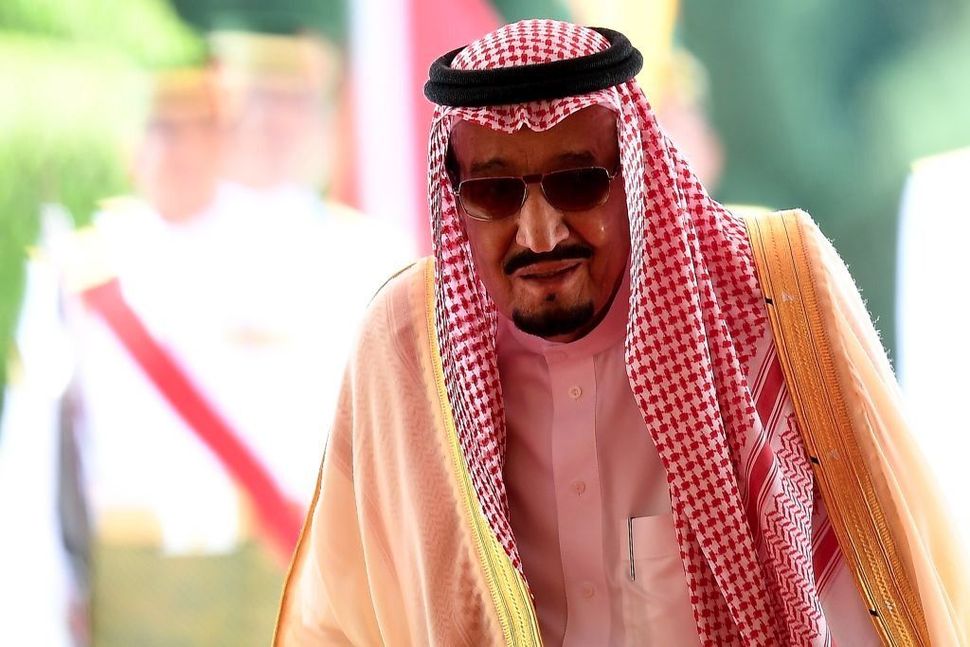 Image by Photo of King Salman by Getty Images

Before visiting Jerusalem in several days, President Trump will stop in Saudi Arabia for meetings with Islamic leaders to discuss joint efforts against extremism. He may wish to start with Saudi Arabia’s own mixed record on incitement against Israel and the Jewish people.

Breathless observers have recently declared that Saudi Arabia and Israel are becoming cozy allies due to their shared concerns about Iran. Analysts have claimed that Riyadh’s “government and the establishment media – and their spin-offs and allies – are pursuing a deliberate strategy” of conveying praiseworthy tolerance toward Israel and Jews. Rudy Giuliani, a figure close to President Donald Trump, even went so far as to argue that Riyadh has done an about face on Israel and that this should guide U.S. policy toward the kingdom.

These observers are fundamentally wrong.

Yes, Saudi Arabia and Israel are aligned versus the threat from Iran, but they are still far from allies. Tellingly, many Saudi officials and establishment figures continue to propagate hatred toward Jews and Israel, even as others express tolerance and moderation.

Saudi King Salman spoke in December at the inaugural session of his country’s consultative parliament, stressing the kingdom’s commitment to “confronting all those who preach religious extremism.” However, the monarch’s lofty words came just weeks after a Saudi UN official, first secretary Abdullah al-Otaibi, declared in New York that “the Jews have no right whatsoever” to Jerusalem’s Temple Mount. The UN official rejected “Torah-based appellations” for the Temple Mount as part of “the Israeli occupation’s fabricated historical narrative,” and falsely asserted that Israel was taking steps that could topple the sacred compound.

In 2015, the state-appointed grand mufti preachedthat Jews were planning to destroy Jerusalem’s Al-Aqsa Mosque and called ISIS “part of the Israeli army.” The top state-appointed religious body praised what it called the Palestinian “jihad and defense of the sanctities of Muslims in Palestine,” terming Israel’s so-called “violation of the sanctity of Islamic holy sites” an act of “terrorism.”

One member of that state-appointed council has contended that Jews plot against the entire world, and in 2016 sermons from Mecca’s Grand Mosque called for divine intervention against the “usurper Jews,” whom he dubbed a “criminal people.” Last year King Salman handed that preacher an award “for service to Islam.” This past June, Saudi state TV gave five hours of airtime to a zealot with a government title who had recently called for God to “destroy” the Jews and save Al-Aqsa from their “claws.”

Meanwhile, references to “the Israeli enemy” and “Israeli aggression” pepper official Saudi news coverage of Israeli military actions, and anti-Semitic cartoons — such as depicting Jews as pigs – are still common in the Saudi press. Similarly, in the policy arena, Foreign Minister Adel al-Jubeir referred to Israel as the “Zionist enemy” in late 2015. This past October, Abdullah al-Mouallimi, Saudi Arabia’s UN ambassador, lumped Israel in with Saudi Arabia’s arch-enemy Iran as the world’s main state sponsors of terrorism.

It is true that some Saudi leaders are finally coming to the realization that they need Israel. This is driven by a mutual fear of Iran and a shared perception that the United States has been withdrawing from the region.

All of this must be acknowledged and encouraged. Israeli-Saudi cooperation against Tehran’s destabilizing regional influence is vital. Moreover, Saudi-Israeli détente might even accelerate the drive for peace, as suggested by Israeli Prime Minister Benjamin Netanyahu’s declaration in May that the Saudi-led Arab Peace Initiative “includes positive elements that can help revive constructive negotiations with the Palestinians.”

Saudi Arabia’s nascent thawing of relations with Israel and the Jewish people is step in a positive direction. However, Riyadh’s permission for its officials to enflame anti-Semitism works at cross-purposes with this objective, and is ultimately bad for American interests. Riyadh understandably wants Israel to acknowledge the Palestinians’ peoplehood and their claim to an independent state. By the same token, Saudis should also stop denying the humanity of Jews and Israelis – and that includes their connection to Jerusalem‘s holy sites. Further, Riyadh should cease its attempts to delegitimize the State of Israel.

If the kingdom hopes to claim the mantle of a responsible, moderate regional leader, it must act like one, and to extend that moderation to people of all faiths. And yes, that must include Jews.

David Andrew Weinberg is a Senior Fellow at the Foundation for Defense of Democracies, where David Daoud is an Arabic-language Research Analyst. Follow them on Twitter at @DavidAWeinberg and @DavidADaoud.