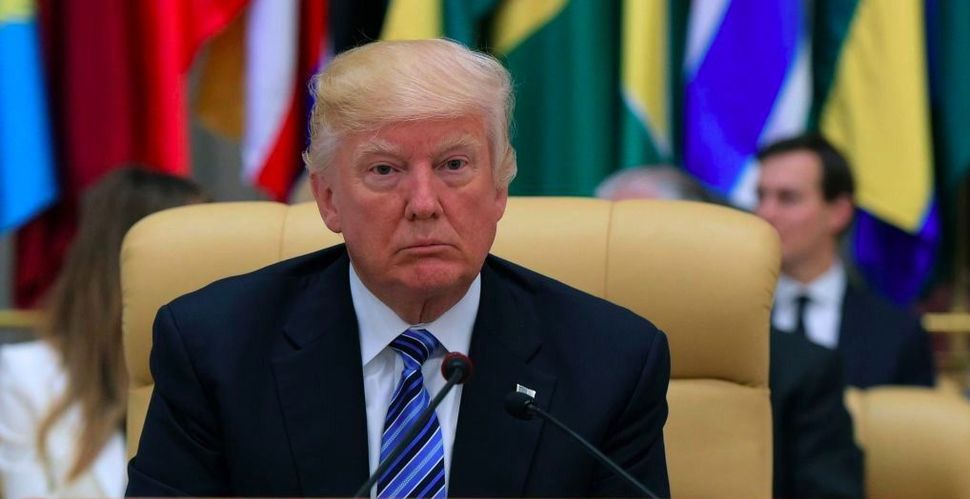 He reversed eight years of foreign policy carried out by his predecessor, Barack Obama. He positioned himself as champion of Saudi Arabia and Sunni Islam and as chief adversary of Iran and the Shia. He embraced the kingdoms, sheikdoms, dictatorships, military regimes and popular democratic republics of political Islam and absolved them of the human rights and democratic mumbo-jumbo that Obama used to torment them with.

Like Benjamin Netanyahu before him, Trump is now Mr. Terror, a leader for whom all other considerations are subordinate to the fight against it.

The contrast between Trump’s well-structured speech, notwithstanding the unusual lethargy with which he read it out from the teleprompter, and the statements that he has made in the past, was flabbergasting, to say the least. He once accused Islam of hating America and the Saudis of perpetrating 9/11, and he advocated a total ban on Muslim entry to the United States. Suddenly he was singing the praises of those he had just described as evil-doers, to the point where one could have imagined him bursting out in kumbaya. He showed the world that consistency is a worthless notion and words have no meaning at all. His holy trinity is opportunism, pragmatism and copious amounts of cynicism.

His speech was, in many ways, the complete opposite of the one Barack Obama made in Cairo in June 2009. Unlike Obama, Trump did not express sympathy for Muslim grievances or regret of past injustices perpetrated by the West, nor did he declare Islam “a part of America,” as Obama did. He didn’t mention the Islamic roots he doesn’t have, of course, but also didn’t dwell on the religion’s contributions to civilization. He did not praise America’s commitment to freedom or democracy and therefore did not admonish his listeners to improve the lot of women, minorities or those of other religions over whom they rule. Bizarrely, he praised Saudi Arabia’s advancement of women, even though they still can’t drive and are routinely arrested if caught not wearing traditional Muslim garb.

Trump certainly did not devote a full 20 percent of his speech to the Israeli-Palestinian conflict, as Obama did. He made do with a short mention of his hope to achieve peace between the two sides, and even omitted Israel’s name from the countries that suffered from terrorism. If it was Obama, as the cliche goes, Israeli ministers would be out in full force to condemn Trump as a coward and Israel-hater.

Trump coined his approach as Principled Realism. America would protect its citizens and would forge partnerships with countries it once disdained. Nonetheless, alongside his pragmatic approach, there was a peculiar streak of religious fervor if not outright messianism in Trump’s address, as there’s been throughout his foreign tour.  He’s made a point of visiting the holy places of the three monotheistic religions. He mentioned God nine times on his speech, called on everyone to pray and spoke of the Children of God. He said that the summit could lead the way to Middle East peace – with the help of the three religions – and from there, who knows, world peace could be had as well. It wasn’t completely clear if Trump was drawing inspiration from the Sermon on the Mount or from the handbook for contestants in the Miss Universe pageants he once owned.

Trump should be happy with his welcome and with his performance on Sunday. He was received with fanfare worthy of A Thousand and One Nights, which managed to sideline, for a day or two at least, the constant barrage of bad news back home. He delivered one of his better speeches, as he does whenever he sticks to the texts crafted by others. Like his campaign speech in August 2016 about national unity and his address in February 2017 to both houses of Congress, the one in Riyadh will also fuel speculation whether Trump has finally turned the corner and is about to reset his entire presidency. As before, the answer will soon enough turn out to be negative. In fact, Israelis should brace themselves for the possibility that once he lands at Ben Gurion Airport, Trump will release his cooped up energies, dispense with his good behavior and take it all out on Benjamin Netanyahu and his ministers.

The Saudis should be happy as well, at least in the short term. Trump crowned them as leaders of the Sunni world and as the spearhead of the campaign against Iran. He cast them as his agents in the Muslim world but also as those who hold him and the American economy in a sensitive place that they can squeeze, when needed. Only time will tell if the unusually belligerent tone taken on Sunday by King Salman, at the behest of his impatient would-be successors, will make the kingdom stronger and add to its prestige or whether the newfound Saudi arrogance will turn out to be a double-edged sword. Saudi Arabia, after all, succeeded in maintaining eight decades of relative stability and absolute prosperity by keeping a low profile, engaging in backdoor diplomacy and letting others do their fighting for them.

Should Israel be happy? That’s a complex question and depends who you’re asking. The fact that Tehran, Damascus, Hezbollah and Hamas were marked by Trump will certainly satisfy Israel. The unification of the Sunni camp around Saudi Arabia and against Tehran will also be viewed as a positive development for anyone who regards the Iran nuclear deal as a catastrophe. Nonetheless, one can’t overlook the fact that the thrust of Trump’s speech was the war on terror, while his attacks on Iran and Syria seemed at times perfunctory. The same is true of Trump’s surprisingly brief mention of the Palestinians, which stood in stark contrast to their centrality in Obama’s Cairo address. The Palestinians, whose initial skepticism was replaced by unexpected hope, may have their expectations dashed again, for the umpteenth time.

Nonetheless, it’s premature for Netanyahu and his coalition colleagues to celebrate. There are several warning signs that should give them pause. A president with a messianic drive to make peace is bad news for those who think that Israeli-Palestinian peace is unattainable, and if it is, who are unwilling to pay the price to make it happen. And even though Israel encouraged the White House to reach out to Saudi Arabia and the Gulf countries and saw it as an opportunity to integrate Israel in an anti-Iranian front, Trump’s ecstatic reaction to the princely welcome engineered by the Saudi indicates that the plan may have succeeded too much. Trump did urge Muslim states to “drive out” terrorists, but in return he created an obligation to reward them if they do. They don’t really care about the Palestinians, but would be overjoyed if Trump could solve the problem that has been plaguing them for the past 100 years.

In the final analysis, Trump connected in Riyadh with his own milieu. These are his guys. Some of them, like the Saudi King, the Qatar Emir or the Omani Sultan are reportedly vastly richer than he is. Some, the rulers of Kuwait or Morocco, are his equals. Others may have only a few hundred million dollars lying around, but they’re in the same club. They all live like billionaires, think like billionaires and behave like billionaires. They speak Trump’s language.

So the question is how will Trump react when he arrives on Monday to a country in which the prime minister has to force his ministers to show up for the arrival ceremony at Ben Gurion Airport, one in which the best laid plans for elaborate welcomes like the one staged by the Saudis often end in mayhem or even catastrophe, one which is led by a prime minister who begs billionaires like Trump to buy them Cuban cigars and pink Champagne.

You wanna know the truth? It doesn’t bode well.