How Jared Kushner Tramples The Torah 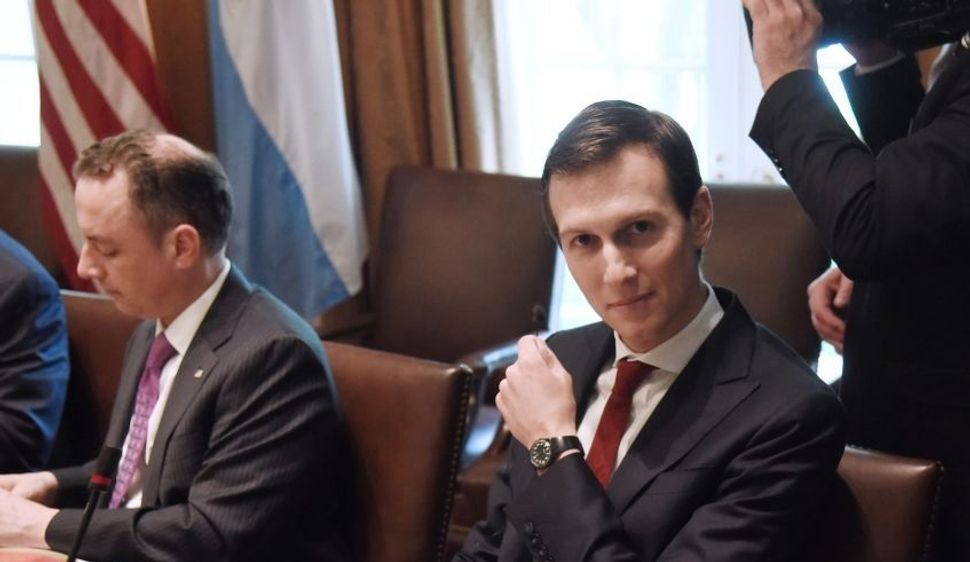 As we enter the festival that has come to mean standing again, each year, at Sinai. What does it mean for us to do this seriously, taking Torah deep into our lives, challenging ourselves to live by its deepest teachings?

What would it mean to bring Torah to bear within or upon one rich, powerful and unjust Jew — Jared Kushner?

Through the last 2,000 years or so of Jewish history, generations of rabbis have defined themselves — ourselves — as heirs of the Prophets, not of the priests. Heirs of the Prophetic commitment to challenge unjust and destructive behavior, to reinterpret Torah for the sake of renewing life as the world around us and within us changed.

When Jews lived in self-contained communities, social if not physical ghettos, that degree of social control was workable for the sake of life-giving, justice-living Torah. But as we – for good reason! — left such social ghettos, the ability of the rabbis or of the community as a whole to rebuke and end destructive and unethical behavior dwindled. So that raises the question: What could the Jewish community of today do about such behavior?

I want to raise a perfect example of how Torah values are trampled underfoot even while the semblance of piety is claimed. A story of one man who at this moment holds great power and exemplifies in his own person the “kleptocracy” — rule by thieves — that now afflicts us.

A recent article in the New York Times Magazine titled “Jared Kushner’s Other Real Estate Empire” describes in stomach-churning detail how Kushner’s real-estate firm, using several shell companies to hide its ownership from public view, has become an oppressor of the poor.

His companies have used false accusations and brutal behavior toward low-income people who are tenants and even former tenants of the Kushner-owned properties, to extract money from them that in fact they don’t owe, ruining their families and their lives.

It seems to me that this behavior by a very high-profile Jew who claims not only the ethnic identity but the religious conviction is exactly what my grandmother called a chillul hashem.

“Chillul,” from the same root as “challil,” the hollow flute, means hollowing-out — in this case, hollowing out God’s Name. Since one of the mystics’ metaphors for God is “Tree of Life,” the “hollowing” is an especially powerful imagery.

A person who seems on the outside to be celebrating a living, thriving Sacred Tree of Life has hollowed out all the life-juice within.

The seemingly pious behavior of a seemingly pious Jew actually shatters the Torah — not in the private and self-contained way of a Jew who decides to eat pork; rather, in a way that shatters decency and justice in the public sphere, for many victims.

Kushner’s behavior teaches a vile version of Judaism. When Jews lived in self-contained communities, such an ethical and religious violation could be confronted, rebuked, perhaps punished, even healed by repentant self-correction.

Now, it is harder. But, perhaps, it is still possible.

I recall when a small group of rabbis in Northern California, who called themselves ”the Redwood Rabbis,” challenged a Jewish corporate owner whose business was logging magnificent 2,000-year-old redwood trees to make paneling for rich people’s basements. The corporation’s own annual report said that redwood paneling without knots sold better, and it came only from ancient trees.

We gathered on Tu B’Shvat, the RebirthDay of the Trees and of the sacred Tree of Life, to “trespass” on his land to rebuke his killing of these sacred trees of life. We placed a critical ad in his home-town Jewish newspaper just before Yom Kippur to call him to do tshuvah (repentance).

We voted inside and demonstrated outside when his stockholders gathered for the annual corporate meeting.

And finally, reluctantly, he sold the groves of ancient redwoods to the California and American governments to be protected.

If rabbis then could see the destruction of these trees as a violation of Torah, what could we say now about acts that cruelly destroy the lives of hard-working human beings? Could we challenge Mr. Kushner in similar ways? If we did, would we risk encouraging anti-Semitism? Or would we risk it more by keeping silent?

We now celebrate the Festival of Shavuot and read the Book of Ruth. It celebrates two people: a penniless foreigner, an immigrant from a despised and hostile nation, a woman unprotected by a man — and a wealthy landholder who not only obeyed but affirmed the Torah’s command to make sure the poor and the immigrant had dignity and a decent livelihood. Could any teaching be more clear about the malfeasance of Jared Kushner?

Since the NY Times article on Kushner’s domestic business cruelties, there have emerged claims he may have negotiated with the Putin government of Russia in clandestine ways. And Politico has suggested his connections with the Lubavitch Chabad organization are intertwined with Chabad’s specially cozy relationship with Putin in a way that benefits him and his father-in-law both financially and politically.

These allegations may or may not turn out to be true. They merit close study. But the cruelty of his business dealings in Baltimore and elsewhere is already proven.

Most American Jews have made clear that they do not view Mr. Kushner or his kleptocratic and authoritarian bully of a father-in-law as heroes. But the established “major” organizations have so far not rebuked such behavior by rich or powerful Jews, nor have the rabbis who might be thought to be the guardians of Torah. What more might we do to stand again at Sinai and to clarify what Judaism ought to be, in actual practice?

Rabbi Arthur Waskow, Ph.D., founded (1983) and directs The Shalom Center, a prophetic voice in the Jewish, multireligious and American worlds for justice, peace and healing of the Earth.

How Jared Kushner Tramples The Torah