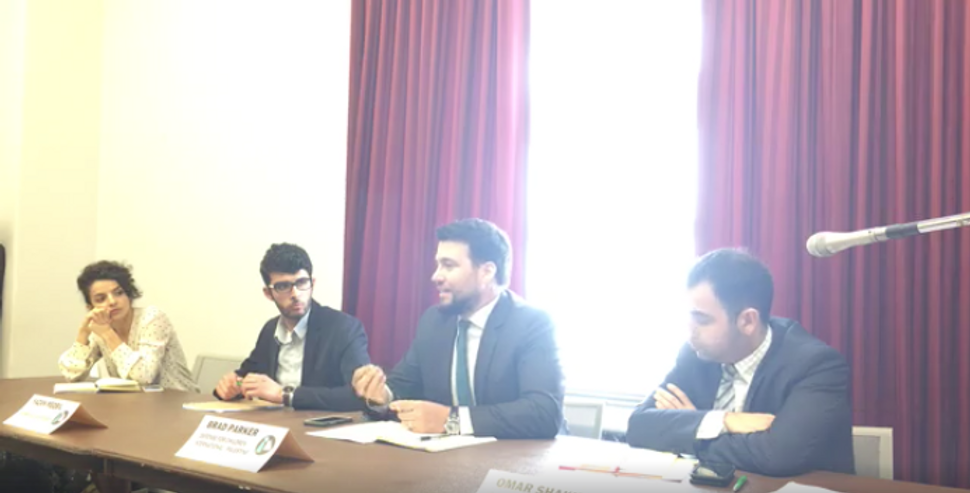 What do The Israel Project and the Chicago Dyke March organizers have in common, Peter Beinart asks in his response to my op-ed published on Tuesday. Nothing — that’s the short and only answer to his latest slanderous assault on the integrity of my organization.

We, at TIP, are a nonpartisan, centrist, umbrella organization that supports the goal of peace between Israel and all her Arab neighbors, including the Palestinians. We explicitly do not reject Palestinian nationalism. To the contrary, by supporting such an outcome we validate it. At TIP, we support honest dialogue and honesty.

This ethos could not set us further apart from Beinart or from the Chicago Dyke March organizers. Feeling “triggered” and “unsafe” by three queer women carrying rainbow flags adorned with the Jewish Star of David, the marchers celebrated a Judenrein gay parade, masquerading anti-Semitism as anti-Zionism, while selectively waving the Palestinian flag.

A much better subject for discussion, therefore, would have been what the Dyke March organizers have in common with the organizers of the anti-Israel hatefest in Congress that Beinart defended in his original op-ed. The answer is obvious: They are united in their contempt and dehumanization of Jews.

When I defended The Israel Project initially Tuesday, my argument could be boiled down to: We criticized a Capitol Hill event that featured five speakers who endorsed the boycott, divestment and sanctions (BDS) campaign against Israel. The BDS hate campaign embodies anti-Zionism — which is anti-Semitism. By its founders’ and proponents’ own admissions, the BDS campaign opposes the creation and existence of the nation-state of the Jewish people, meaning that Jews are undeserving of statehood and self-determination, a notion that is patently anti-Semitic.

The irony in all this is that Beinart, by falsely accusing my organization of dehumanizing Palestinians, and failing to identify anti-Zionism as anti-Semitism, missed the real parallel.

Now, in a desperate and distorted response to having his original claim that the event on the Hill, sponsored by Pocan and featuring anti-Zionist, Jewish state-eliminationists, was anything but a hatefest, Beinart seeks to peddle another lie: equating those who object to anti-Semitism with those perpetrating it.

Once again, like his pride at having extremists spread their poison at his blog “Open Zion”, he now seeks to legitimize modern anti-Semitism in Congress, blind to his own hypocrisy because he sees ideological allies in his effort to blame Israel — not Palestinian rejectionism — for the lack to peace. Beinart’s allies — those he is defending — deny the rights of Jews to self-determination, under any circumstances.

Let’s be clear: anti-Zionism is a modern-day expression of anti-Semitism. This is not just my view. Anti-Zionism, the belief that Jews alone do not deserve a state of their own, has been described as anti-Semitic by established experts all across the globe.

Jonathan Greenblatt, CEO of the Anti-Defamation League, said at a symposium held at the United Nations, “Racism in all forms is intolerable. Anti-Zionism is anti-Semitism. Both are unacceptable.”

Lord Jonathan Sacks, the former Chief Rabbi of the United Kingdom, wrote, “Anti-semitism means denying the right of Jews to exist as Jews with the same rights as everyone else. The form this takes today is anti-Zionism. Of course, there is a difference between Zionism and Judaism, and between Jews and Israelis, but this difference does not exist for the new anti-Semites themselves.”

His sentiment was echoed by António Guterres, the Sectary General of the United Nations, who told the Simon Wiesenthal Center that the “denial of Israel’s right to exist is anti-Semitism.”

Then-French Prime Minister Manuel Valls said in July 2014, as his country was beset by anti-Israel riots, that anti-Semitism had adopted “a new form. It spreads on the Internet, in our popular neighborhoods, with a youth that has lost its points of reference, has no conscience of history, and who hides itself behind a fake anti-Zionism.”

Greenblatt, Sacks, Guterres and Valls would all agree with us, at TIP, that a forum that had five people who were denying Israel’s right to exist is inherently anti-Semitic in nature.

Which is why we object so strenuously to handing the microphone to those who are extremists and deny the rights of Jews, like the fellow travelers Beinart seems so hellbent on embracing. Indeed, the fundamental nature of anti-Zionism rejects the existence of the Jewish state and legitimacy of the Jewish presence in Israel, just as those at the Chicago Dyke March rejected the presence of Jews, committing what is universally recognized as an egregious act of anti-Semitism in ejecting women who simply displayed the Star of David on their pride flags.

Those who support the spreading of anti-Semitic ideas ― and worse, those who give Jewish legitimacy to their hateful lies, slanders and misrepresentations — are the extremists who need to be shunned.

Josh Block is the CEO and president of The Israel Project.