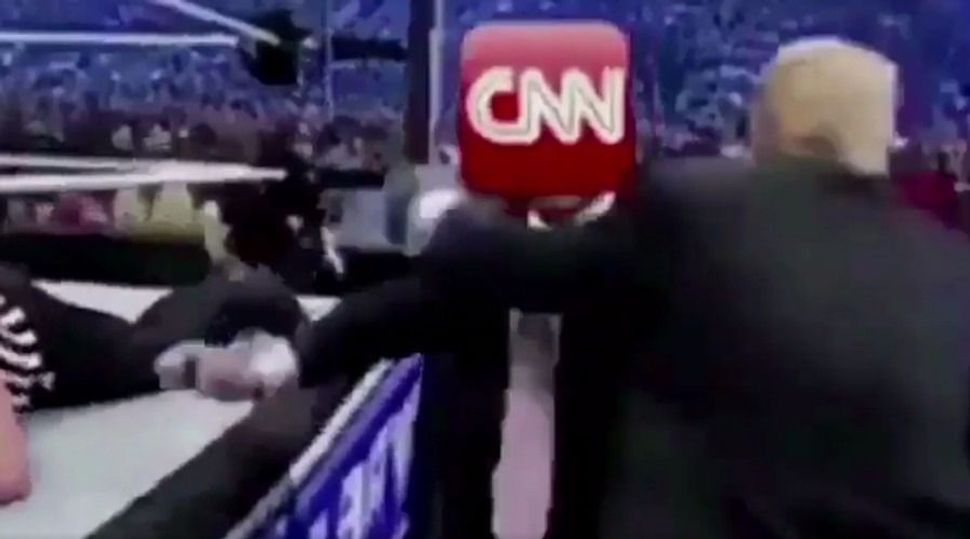 Last week I was at Foehrenwald, the site of a former refugee camp where I grew up. Located in southern Germany, near Munich, next to the town of Wolfratshausen, it was once a refugee camp for displaced persons in the U.S. zone of occupation. There, under the auspices of United Nations relief agencies, 5,000 Holocaust survivors were given a new lease on life.

This week, on my return to Washington, I was greeted by the sight of a presidential tweet featuring our nation’s leader violently stomping on a man lying defenseless on the floor. The label CNN was superimposed on him. The short video gave the appearance of the righteous kicking the life out of an entity that deserved no sympathy, and bore little semblance to humanity.

For me, and perhaps for millions of others, the image was reminiscent of the ones emblazoned in my consciousness of Nazi stormtroopers kicking helpless Jews forced to wear the Yellow Star of David.

Of course, it’s not the same spirit of anti-Semitism that pervades in this animated tweet. But it is a spirit rife with overtones of turning a blind eye to violence, and encouraging its reemergence — however inadvertently — by being oblivious to the consequences of the image of a president stomping on a limp and seemingly defenseless news network.

“If he gets kicked, he kicks back harder,” Trump’s legitimizers say, as if ignorant or uncaring about the content of his message. But the president has a monopoly on the use of physical force. Were the press to create an animated tweet of its own, showing it stomping on the president, where would that leave us? To the encouragement of violence? To civil war?

I served in the Reagan administration as senior counsel to two U.N. ambassadors — Jeane Kirkpatrick and Gen. Vernon Walters. I remember with pride escorting Walters to his first U.N. Security Council closed-door session, where the 15 members are present in a small room and allowed only one aide each. When Walters heard the delegates sponsor a resolution condemning Israel for “Nazi-like practices” with regard to its settlement policies, he was appalled. Without any prompting from me, he stood up, looked at the sponsors of the resolution in the eye, and said: “You should be ashamed of yourselves. I know what Nazi practices are and so should you. This language has no place in describing Israeli practices.” The sponsors withdrew their use of the noxious term.

Were Walters alive today, I am confident that upon seeing this animated tweet, he would be appalled enough to stand up and say: “Mr. President, you should be ashamed. This has no place in America’s public life.”

Last week I discovered how townspeople in Germany are struggling with what they call their country’s turn to “national insanity.” They are still trying to figure out how it all began. In Wolfratshausen, a museum is being built to commemorate its displaced persons camp and applaud President Truman’s decision to establish such camps, aimed at reviving the health and well-being of the Jewish remnant of Europe.

That American spirit — a beacon of light to the oppressed — is worshipped around the world. But even in 1950, when my parents immigrated to America, that spirit was not all-embracing. Severe immigration restrictions were in place, forcing my parents, who yearned for America, to come here by illegal means, assuming false identities. 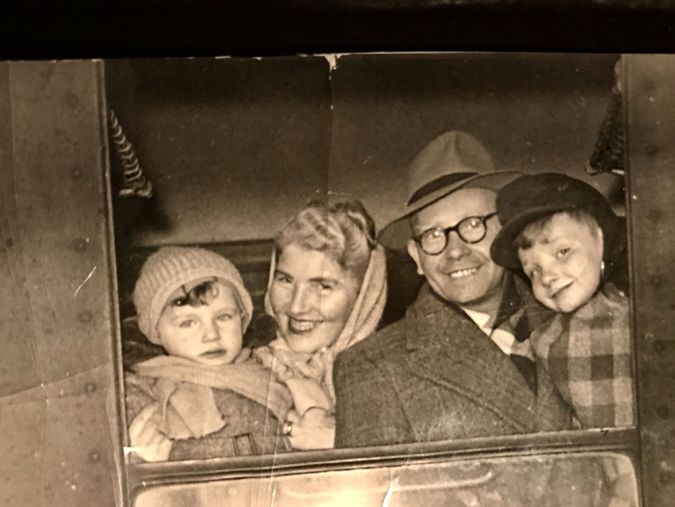 Eight years later, unable to live life as illegal immigrants, they confessed what they had done to a U.S. federal court and asked that their names be allowed to revert to their original ones and that they be entitled to acquire U.S. citizenship. The request was granted. That’s the spirit of America under which I grew up: an imperfect country, but one whose dominant spirit was that of caring and compassion.

Now, that spirit has been stained by a mindless animation reminiscent of Nazis kicking innocent, defenseless civilians. I would like to believe that the resemblance was the product of ignorance. If so, there is still time to express deep regret for its unintended consequences.

Allan Gerson, an international lawyer in Washington, D.C., is the co-author of “The Price of Terror: How the Families of the Victims of Pan Am 103 Brought Libya to Justice.”