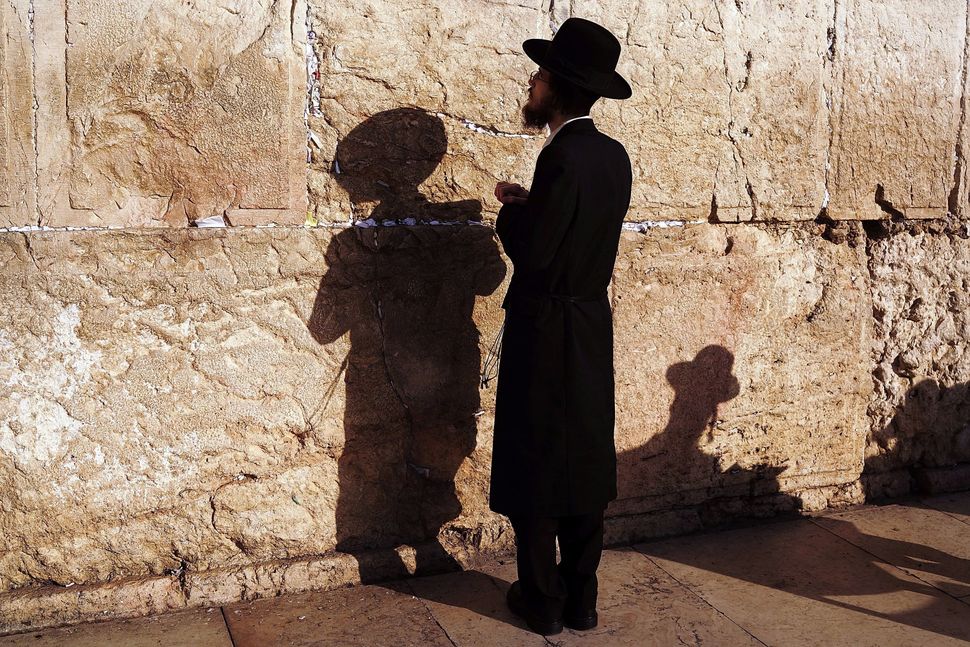 An Orthodox man prays at the Western Wall in the Old City of Jerusalem. Image by Getty Images

What are we, chopped liver?

The question, from my Orthodox corner of the American Jewish world, is born of the recent onslaught of outrage aimed at the Israeli government by representatives of “American Jewry.”

The outrage itself, of course, was born of two things. The first was the Israeli Cabinet’s freezing of a resolution aimed at further accommodating mixed-sex worshippers at the Kotel HaMaaravi, or Western Wall. The second was a Knesset bill providing the Israeli chief rabbinate oversight over conversions in Israel with respect to the right to automatic citizenship (though it was later announced that consideration of the bill will be delayed for six months).

Now, all Jews are entitled to their opinions, even to desert island synagogues they choose to shun. But do media and American Jewish leaders really have a right to characterize one particular opinion as being that of “American Jews” or the “Jewish Diaspora” or “world Jewry”?

To wit, and italics mine: A Haaretz column headline: “Netanyahu To American Jews: Drop Dead.” And a Guardian one: “Jewish Diaspora Angry As Netanyahu Scraps Western Wall Mixed Prayer Plan.”

Or Diaspora Affairs Minister Naftali Bennett: “The representatives of U.S. Jewry feel they were slapped in the face.”

And, in further slap-happiness, former ambassador to the U.S. Sallai Meridor called the Kotel decision “a slap in the face to world Jewry.”

Not to be outdone, the Anti-Defamation League bemoaned the undermining of trust “between American Jewry and Israel.”

For his part, the American Jewish Committee’s executive director, David Harris, claimed that the Kotel decision was “a setback for Jewish unity and the essential ties that bind Israel and American Jews.”

And for his, Jewish Federations of North America CEO Jerry Silverman decried how “disastrous conversion legislation would be for global Jewry.”

And then there are things like the recent New York Times piece on the contretemps. In nearly 1,500 words, an assortment of infuriated non-Orthodox American Jewish clergy and philanthropists are duly quoted. But there was not a single American Orthodox voice.

Why is the American Orthodox community being ignored in all this? Why are leaders speaking in our name? Why is the media duly swallowing that arrogation whole?

Do they not realize that the American Orthodox community exists, and in fact is rather robust? That we Orthodox harbor different sentiments from them? And that there are actually reasons for that?

Sociologist Steven M. Cohen of Hebrew Union College-Jewish Institute of Religion has observed that within two generations, the Orthodox fraction of the American Jewish population – conservatively estimated at 10% – has more than quintupled. More than a quarter of American Jews 17 years of age or younger, moreover, are Orthodox. Pundits Eric Cohen and Aylana Meisel of the Tikvah Fund estimate that, by 2050, the American Jewish community will be majority Orthodox.

Not to mention that the Orthodox sector of Jewish America is the most Jewishly engaged one, and its members are greatly involved with Israel, supporting it, visiting it, sending its children to study there. And, quite often, relocating there.

In the currently contentious issues, we Orthodox (and not just “ultras”) stand in a very different place than the current Jewish establishment. Why?

Start with this thought: A self-described Jewish state, to merit the epithet, must maintain some Jewish standard, including in its treatment of holy places and its definitions of personal status.

And continue with this one: The absence of any standard, or the adoption of multiple standards (which is effectively the same thing), is a recipe for fractionalization and disunity.

The Kotel was once a Jewish societal oasis, probably the only place on earth where Jews of different religious convictions prayed side by side. No one asked, or cared, what prayer book, or religious attitudes, anyone was holding. What allowed for that minor miracle was the maintenance at that holy place of a public standard — that of time-honored Jewish religious tradition. Men stood on one side, women on another; vocal public prayer reflected millennia-old halachic norms.

That peace has been shattered, and the holy place turned into a place of strife, thanks to the antics of “activists” holding monthly protests in the guise of prayer services, with photographers in tow to capture Haredi hooligans’ anger. The vast majority of Haredim and other Orthodox Jews at the Wall were just quietly anguished.

The protesters, and their American supporters, were given an area of their own for their “egalitarian” services, but, not satisfied with having successfully balkanized the Kotel, insisted on a larger, more prominent space (though the current one is often empty). They received that, too, or at least a pledge to create it — a pledge that is now on hold.

As for conversions, keeping the door open to wholesale “conversions” of non-Jewish Israelis without sufficient regard for Jewish religious law might presently please some observers. But it will only increase Jewish disunity by creating populations that some will consider to be part of the Jewish people but that others, whose consciences insist on fealty to Halacha, simply will not be able to accept as such.

The essential point of contention in both issues — as is clear from the activists’ words — is whether American-style “Jewish pluralism” should be imported to Israel. Though the particulars at issue are largely symbolic — the conversion bill has impact only on citizenship; the Kotel, for better or worse, already has an “egalitarian” section: It represents toeholds for non-Orthodox Jewish movements to climb into Israel.

That thought elates some; it deeply frightens others, like me.

By “rewriting” halachic concepts in America, heterodox movements have effectively created a multiplicity of “Jewish Peoples” here. Once upon a time, a newly observant American’s halachic status as a Jew could be all but assumed. Today, unfortunately, that is no longer the case. The majority of members at many Reform synagogues are simply not Jewish in the eyes of Halacha.

The notion of creating a similar situation in Israel, of balkanizing not only the Western Wall but also the Jewish people, is ultimately what alarms us Orthodox.

Any Jew is free to rejoice in what alarms us, and to gleefully proclaim, “Let a thousand Judaisms bloom!” in Israel.

But he or she should not cavalierly dismiss our fears as unfounded. Nor ignore the fact that we Orthodox are very much a part of the American Jewish community.