I Was Blacklisted By Israel’s Chief Rabbinate 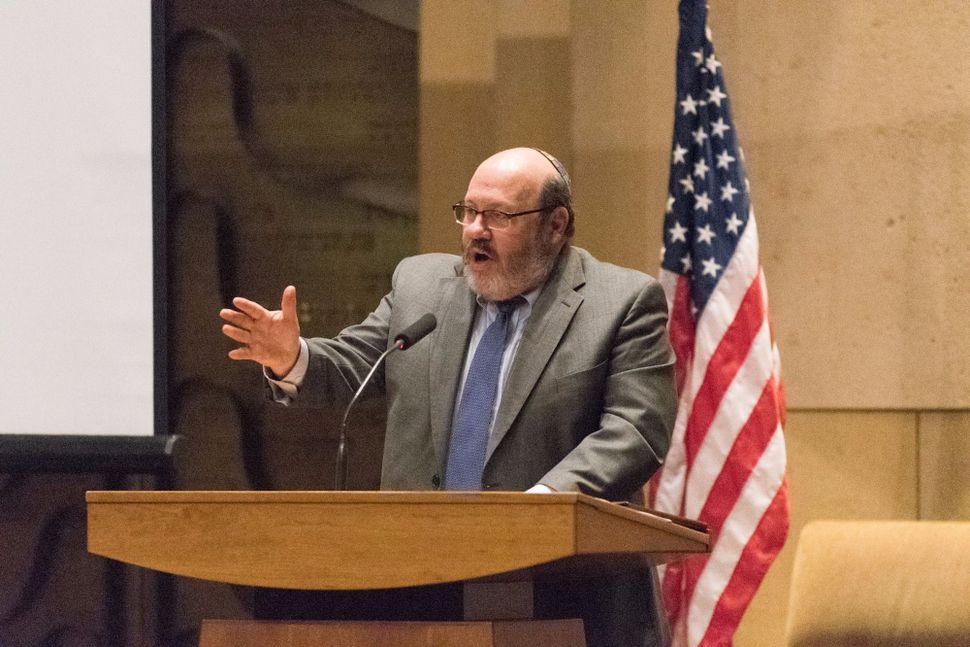 The first memory I have of my father, Harry S. Allen, sitting me down and telling me the facts of life was when I was 4 or 5. He told me in no uncertain terms that there were three things that one needed to do to live a decent and fully Jewish life: keep kosher, love Israel and vote Democratic. Those three simple facts have been enriched over the years in a variety of ways — but when it is all said and done, those three facts of life have defined much of my life’s work.

This week, at least two of those facts — Israel and kashrut — were potentially compromised. I discovered, much to my delight, that I was on a list of 160 American rabbis whom the Israeli Chief Rabbinate considered treyf and did not trust to certify the Jewish identities of immigrants to Israel.

After having spent a lifetime working on behalf of and for the good of the Jewish people, to have been placed on a blacklist by the corrupt Haredi rabbinate seems like a badge of honor.

Sadly, while I can joke about it, it actually demonstrates a serious rift inside the Jewish people that needs remedy, and it will need each of our efforts to address. In 1965, the beloved rabbi of my youth, Daniel Goldberger, comforted me as I was leaving Denver and our traditional synagogue to move to Lincoln, Nebraska, where we would be going to a Conservative synagogue, by saying that it was like “being traded from the National League to the American League. It is still all baseball.”

Today, too many of us are willing to write off too many others who are fully engaged in the “game” as being no longer welcome on the playing field. The unhealthy and unwise intertwined relationship between a state and a particular stream of Judaism is destroying the contours of the Jewish people. There can be no possibility of restoring the glitter and joy of being Jewish when an official state religion dices and slices our people apart. Until the chief rabbinate is disbanded and Jewish life is allowed to function in an open marketplace of ideas, the Jewish people inside and outside Israel will continue to splinter.

I am now in my 32nd year in the same congregation in Middle America. Over the previous 31 years, we have celebrated repeatedly as people prepared to make aliyah from our community. Just last month, another young man who grew up in our synagogue, who did his service in the Israel Defense Forces after high school graduation and then returned to Minnesota to finish college, returned to Israel. This story has been repeated in my synagogue and in most of the synagogues of the rabbis on that list.

Our commitments to the Jewish community demand that we end the divisive and pernicious control of religion by the Israeli chief rabbis, backed by the power of the state. The lack of serious education inside Israel about the dynamism of most of the synagogues that have rabbis on that list is a tragedy for the Jewish future we all crave. If Chief Rabbi David Lau were to walk into my synagogue on a Shabbat morning — not that he would ever consider it, sadly — he would witness a community that would create dissonance for him for years to come.

It is a synagogue where our co-presidents have both embraced Judaism as adults and brought their amazing families into the covenant between the God of Israel and the Jewish people. One of the co-presidents drove three hours round-trip twice a week for over a year to study with me and to celebrate Shabbat within our community. When she finished her conversion, her embrace of Judaism was evident in her continued desire to learn, and in her decision, together with her husband, who decided to also convert, to move to the Twin Cities, to send their children to Jewish day school and Camp Ramah. The Jewish people have been blessed by similar stories in so many synagogues in America over and over again. We have created a community where Jewish life flourishes and is filled with vibrancy, where Jews born into our people and Jews who have embraced this people as fully their own all find paths to the sacred in their life.

Such lists, conversion laws and the arrogance of the chief rabbis are among the reasons that ties to Israel are seriously damaged. Good, caring Jews now point to this type of sinat chinam, or baseless hatred, emanating from the chief rabbinate and the government of Israel as reasons for turning their backs on the promise of the Jewish state that my father told me to love. We cannot allow it to continue.

In the shadow of the disgraceful act by Prime Minister Benjamin Netanyahu in reneging on the compromise on egalitarian prayer at the Western Wall — which he had asked for and promoted, in light of the chief rabbinate’s decision to blacklist 160 good and thoughtful rabbis, in light of the proposed bill before the Knesset to refuse to non-Orthodox conversions in Israel, we must act. We should not allow any of our communal dollars to benefit any Israeli governmental officials — from members of Knesset to emissaries of the state — who support the continued existence of the office of the chief rabbinate.

Israel has many concerns and many problems. American Jews cannot fix most of them. What we can fix and must address is the disease of an “official” Judaism. The secret of our longevity during the generations of our statelessness was the vibrancy of open and competing views for Jewish meaning. It is evident in our exegesis, in our rabbinic texts and in our philosophical works. The imposition of an official doctrine is now sowing the seeds of our own destruction. Eliminating the chief rabbinate is a necessary step to ending that situation.

My father was buried in Jerusalem three years ago. He never wavered in his love of the Jewish people, and he fulfilled the vision of Midrashic text that one who “identifies with his people will be buried with his people.” Unless we band together now to fight the dangerous intrusions of the chief rabbinate into our lives — even here in America — I fear that fewer and fewer Jews will identify with our “National Project” as a result. For me, that would be the ultimate tragedy of an otherwise foolish list compiled by a foolish institution that does the Jewish people no good.

Rabbi Morris Allen is the rabbi of Beth Jacob Congregation, in Mendota Heights, Minnesota, and has served as the general campaign chair for the Jewish Federation of Greater St. Paul.

I Was Blacklisted By Israel’s Chief Rabbinate