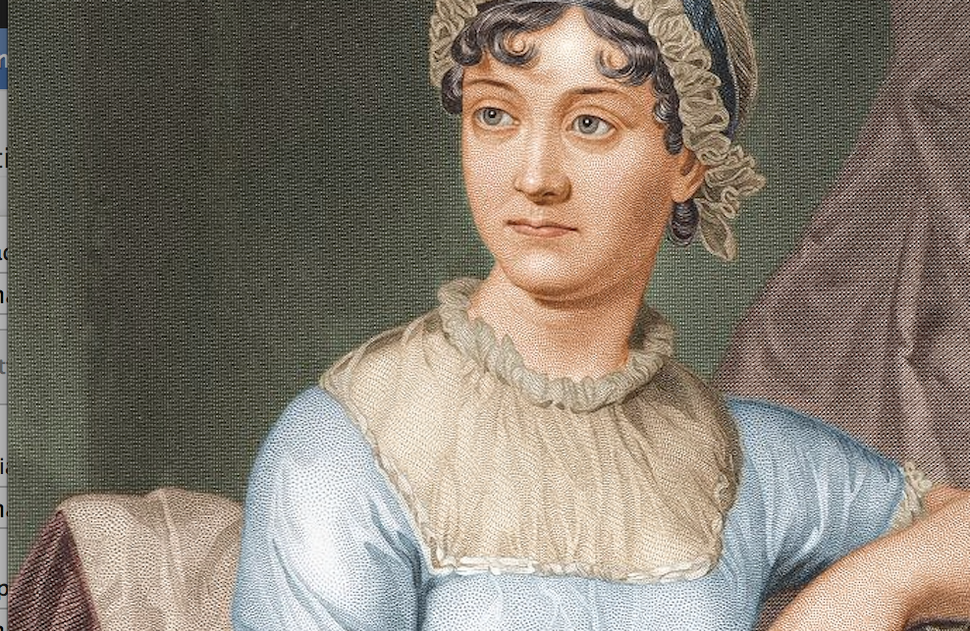 Jane Austen wrote her legendary novels on a small, twelve-sided walnut table situated by a window near the rarely used front door of her family’s cottage in the English village of Chawton. She used a quill pen with ink she may have made herself, on small sheets of writing paper that could easily be shielded from prying eyes.

Taking in this scene on a visit last year, I was awed by Austen’s capacity to write so brilliantly about love, marriage and human character from such a quietly intimate and sheltered space. As others have noted, hers was a modest genius, as distant from today’s technological bustle and boosterism as Chawton village is from the Lower East Side.

But how I wish I could discuss with her the state of Jewish marriage today.

Austen, who died 200 years ago this month, very likely never met a Jewish person. Jews don’t appear in any of her six novels, and the only reference I could find was when an odious character in “Northanger Abbey“ described someone else as “rich as a Jew.”

She wouldn’t need to know us, though, to appreciate that American society is at an inflection point, where the institution of marriage is diminishing in value and status, no longer serving as the sole foundation for child-rearing, family organization and human relations. This development may be inevitable, it may even in some ways be healthy (though I’m skeptical.) But right now it creates anxiety, dislocation, loneliness and a deep unknown — not unlike the reactions that Austen chronicled two centuries ago.

“In ‘Pride and Prejudice,’ as in Austen’s other works, the private angst surrounding the choice of a marriage partner really reflects the larger, public anxieties swirling around a disintegrating class structure, a new social mobility, and increasing personal autonomy,” wrote Karen Swallow Prior, an English professor at Liberty University, in The Atlantic in 2013.

Austen’s priorities were clear: Marriage should be about love, compatibility, integrity, and within the limited scope of women’s status, mutual respect. She pushed back against arranged and desperate unions destined for unhappiness — and in her last completed novel, “Persuasion,” created a main character who eventually prevails over those who dissuaded her from marrying the man she truly loved.

Yet I wonder if Austen would even recognize what’s happening today. Marriage rates in the United States are at record lows and are expected to decline further, as an increasing number of Americans view marriage as neither necessary nor attainable.

American Jews mirror these trends, but even more so. Sylvia Barack Fishman and Steven M. Cohen conducted a new analysis of the Pew Research Center’s 2013 survey data and found that only half of American Jews ages 25 to 54 outside the ultra-Orthodox community are currently married; more than a quarter — 28% — have never been married at all. Among those 25 to 34, prime child-bearing years, 53% have never been married.

Fishman and Cohen are rightly worried that this trend among most American Jews to delay marriage and child bearing, or to forgo them all together, leads to demonstrably lower engagement with Jewish religious, cultural and communal life. Add to that the steady rise in intermarriage, resulting in even more tenuous Jewish bonds, and those of us who believe in the value of sustaining modern Jewish life have a real challenge before us.

One can almost hear Mrs. Bennet, as close to the prototypical overbearing Jewish mother as you will find in English literature, her nerves aflutter over her daughters’ marriage prospects, her anxieties in full bloom, continually asking: What will become of us?

But if I could speak with the real Austen, who never wed but had a preternaturally incisive understanding of marriage, I would ask a different set of questions. What is it about marriage that seems less and less compelling for so many American Jews today? And for those who still believe in it, what more can the community do to reverse these trends?

After all, the institution itself has reformed and modernized since Austen’s time. No longer are wives legally and financially second-class citizens. No longer are husbands consigned to being the major or exclusive source of economic support. No longer is marriage available only to heterosexual couples.

Still, getting married is a waning expectation, and not only among those in their 20s and 30s, living in an economy that encourages a kind of prolonged adolescence. As marriage rates have fallen, the number of couples co-habitating has risen nationwide, and among Jews specifically. Fishman and Cohen found that 16% of 25 to 34-year-olds were living with a partner, but 5% of 45- to 54-year-olds were, too.

And while their analysis topped out at 55, we know from other data that the fastest rising number of Americans spurning marriage are in their 50s and 60s. A Pew survey released in April found that since 2007, the number of co-habiting adults ages 50 and older grew by 75%.

You can’t blame the kids if Grandma isn’t bothering to get married, either.

What would Jane say? It’s presumptuous of me, I know, but I’d like to believe that she would craft a sly response to this crisis-cum-opportunity, reminding us of the truth universally acknowledged (and massively documented): Marriage remains the very best way of ensuring personal happiness, raising children with love and stability, and maintaining social cohesion. It must naturally evolve, but it deserves to be championed and preserved. We discard it at our peril.