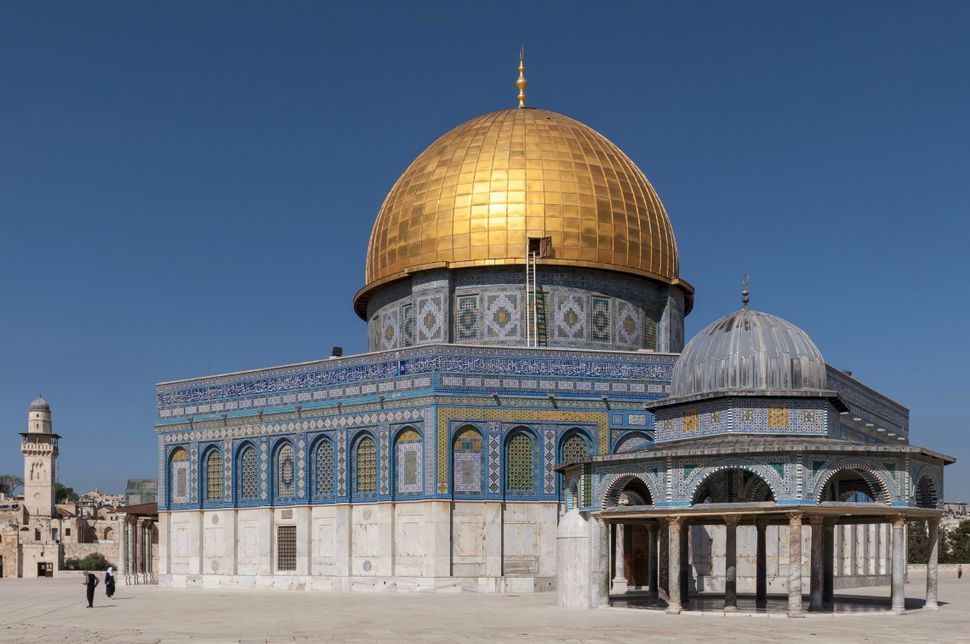 On Saturday evening, July 22, the eighth day of the Temple Mount crisis, Israel’s education minister Naftali Bennett, head of the religious-nationalist Jewish Home party, made a condolence visit to the family that had lost three of its members in a horrific stabbing attack the day before. It was not exactly a shiva call, as the dead hadn’t yet been buried. So, in deference to the norms of Israel’s political culture, Bennett took the solemn, tragic occasion as an opportunity for a bit of political grandstanding.

Much of what Bennett had to say at the terror victims’ home was boilerplate right-wing bombast. He began predictably by pinning responsibility for the previous day’s attack on “those who encourage terror attacks, inflame the atmosphere, pay allowances to the families of terrorists” and worse. Those are standard Israeli ways of describing the Palestinian Authority.

But then Bennett made a curious departure. Leaving aside terrorists and their supposed backers, he turned his attention to an enigmatic enemy: “those who say that Jews are guilty of the fact that they are being murdered.” Those people, whoever they are, “simply legitimize the next massacre” and indeed “create the atmosphere” for the previous day’s stabbing attack.

Israeli society, Bennett went on, must “cease the blame and self-flagellation and unite against the terrorists.” Terrorism “can be eradicated,” he said, voicing a theory with no basis in any known military doctrine. All it takes is the right combination of “force, action, determination and consistency.” And he vowed to press within the government’s Security Cabinet, of which he is a member, would enact an “operational plan” embodying those qualities.

Plainly, this wasn’t an attack on Palestinians or their sympathizers. He was talking about an enemy within, a sector of Israeli society that undermines Israel’s fighting spirit by practicing “self-flagellation.” Who could that be?

It’s not hard to guess. Bennett was taking aim at Israel’s defense and intelligence agencies. He was continuing an argument that had erupted two days earlier — on July 20, the day before the stabbing — at an emergency meeting of the 11-member Security Cabinet. The meeting had been convened so that the ministers could consult with the heads of the main security agencies — primarily the military, the Shin Bet security service and the national police — on how to handle the mounting crisis over the the Temple Mount. As the meeting dragged on, it became a confrontation between the military and the Shin Bet on one side and the police and the political leaders on the other. The army and Shin Bet took the position that leaving the metal detectors in place would inflame Muslim passions and lead to potentially deadly violence. That’s what Bennett meant by Jewish “guilt” in their own murder. In Bennett’s view, looking to one’s own behavior to help explain a problem is tantamount to blaming the victim. The cabinet backed Bennett and repudiated the army, nine to two.

The Temple Mount crisis began on June 14 when a trio of Arab Israelis smuggled firearms into the Temple Mount compound and opened fire on a group of Israeli police, killing two. It was a highly unusual incident, unlike any of the previous flare-ups on the Temple Mount over the past half-century. The attackers were not Palestinians under occupation but native-born Israeli citizens. The dead officers were both members of Israel’s Druze minority, an Arabic-speaking sect that practices a variant of Shi’ite Islam and is closely allied with the Israeli state.

Put differently, this was a confrontation between Israelis and Palestinians in which neither Israeli Jews nor Palestinian Muslims were involved. It was a deadly ambush by one group of Arabic-speaking Israeli citizens against another.

Israeli authorities responded by closing the Temple Mount compound and its mosques to Muslim worshippers for two days and setting up metal detectors at the 12 entrances to the compound. Palestinians responded with outrage. Refusing to pass through the metal detectors, Palestinians massed in the streets for impromptu prayer sessions that quickly deteriorated into rock-throwing confrontations with police. Three protestors were killed.

The reasons for the protests were complex. In the main, Palestinians claimed that in positioning the electronic gates at the entrances to the compound Israel was effectively raising its level of control over the holy site, upsetting the delicate status quo that’s governed the Temple Mount since Israel captured it 50 years ago. Their protests were strongly seconded by a host of outside Arab and Muslim powers, notably including Jordan and the Palestinian Authority.

Unspoken was a sense that Palestinians were being punished — forced to stand on long lines and pass through humiliating new inspections — for a conflict among Israelis that had nothing to do with them.

Behind the public confrontation, another showdown was going on behind the scenes, this one among Israeli security agencies. The metal detectors had been placed at the entrances to the compound by the police. The army and the Shin Bet, which manage Israel’s relationship wit the Palestinians in the West Bank, quickly concluded that the devices were counterproductive and would cause more harm than good because the intense resentment they aroused threatened to turn violent.

Israel’s national police is in charge of maintaining public order in Jerusalem’s eastern, mostly Arab sector because it was annexed by Israel shortly after its capture in 1967. Israel considers East Jerusalem, including the Old City and the Temple Mount, to be fully part of sovereign Israel. That’s unlike the rest of the West Bank, which is ruled by the military — under military occupation, though Israeli officialdom abhors the word — in close coordination with the Shin Bet.

It should be recalled that Israel’s annexation of East Jerusalem hasn’t been recognized by a single nation in the world. In everyday dealings, Israelis have grown so accustomed to seeing Jerusalem as united under Israeli sovereignty that they continue to be surprised and distressed — over and over — when other nations treat the eastern sector as occupied territory.

Here’s where the roles of the military and the government differ. The government is elected to execute Israeli policy and defend it, however unsuccessfully, in the international arena. The military being apolitical by law, is charged with observing and enforcing the government’s laws, but not necessariy making the case for them. Being apolitical by law, the army is required in the nature of things to understand what it’s up against, including the attitudes of the other side.

No spot is more susceptible to misunderstanding than the Temple Mount. It’s considered in Jewish tradition to be the holiest spot on earth. In Islam it’s third holiest. Each side views the plot as its own sovereign territory and removed from any negotiating process. In practice the two sides maintain an uneasy status quo, each side constantly on guard for any effort by the other to increase its share of control.

Both sides have a habit of taking small steps that they consider well within the status quo but the other side rejects as a power grab, invariably leaving the initiating side bewildered at the anger.

The current crisis over the Temple Mount represents the fourth time in the past two decades in which Israel took such an ostensibly harmless step and prompted an unanticipated explosion.

The first was in September 1996, when newbie prime minister Benjamin Netanyahu ordered that archaeological tunnels under the Western Wall be opened for tourists. Palestinians rebelled, fearing that Israel was planning on digging under the Temple Mount compound and undermining the sacred Muslim shrine. A brief shooting war erupted between the Israeli army and the still-untested Palestinian security forces, leaving 19 Israelis and nearly 100 Palestinians dead.

The next was the elaborate visit to the Mount compound in September 2000 by then-opposition leader Ariel Sharon. It was intended as a demonstration of Israel’s sovereignty over the site. Palestinians reacted with a four-year wave of violence, the Second or “Al Aqsa” Intifada.

The third was a flurry of passionate interest among Israeli religious nationalists in reenacting the ancient pilgrimage to the Holy Temple during the Sukkot festival, beginning in late September 2015. For weeks groups of Israelis, including Knesset members and even cabinet ministers, staged demonstratively festive visits to the compound. Palestinian Muslim leaders, religious and political, responded with outrage and called on Palestinians to resist. The result was a wave of so-called lone wolf attacks, mostly stabbings and car-rammings, that only petered out the following spring.

The current crisis is the fourth. If the past teaches us anything, it’s that this one won’t be the last.