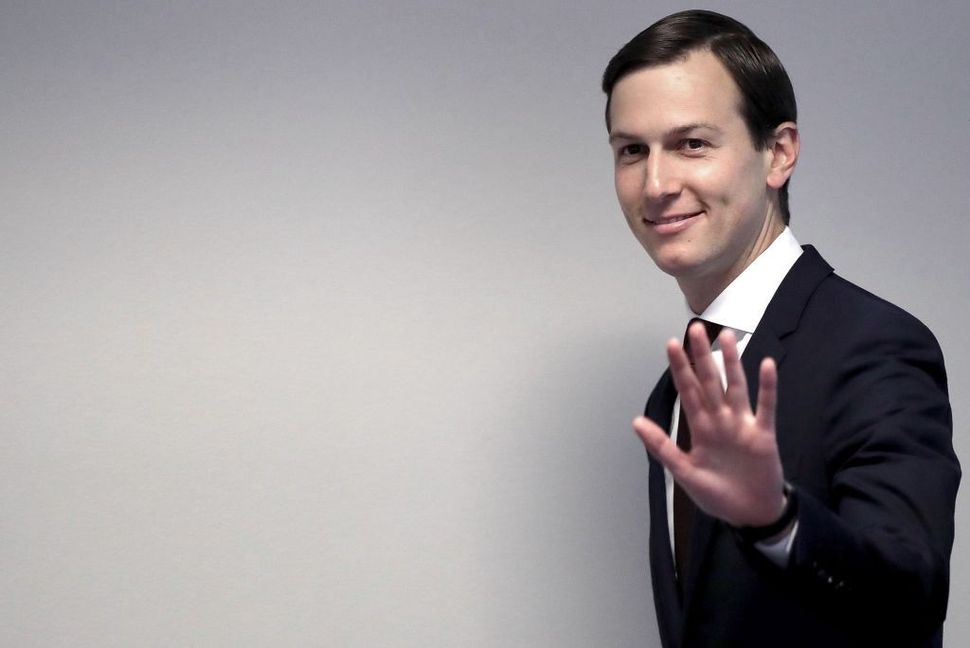 It’s official: Jared Kushner is the least popular member of the first family — by far. This may or may not have something to do with his being an Orthodox Jew, as the Forward’s editor-in-chief, Jane Eisner argued in her July 25 op-ed.

But is Kushner’s religion really the guy’s most salient feature, even in the American imagination?

I don’t think so. Despite the fact that we all know he’s an Orthodox Jew, that’s just not how he reads to Americans. There’s actually another defining feature that characterizes America’s new favorite villain even more than his Jewishness: Jared Kushner is a quintessential millennial.

Is Kushner actually a millennial at all, you might ask? Probably, according to various studies and reports claiming that you’re a millennial if you were born anywhere from 1976 to 2010. Kushner was born in 1981, so for our purposes, he fits the bill. And even if you don’t consider early ’80s babies true millennials, we hope to convince you that he possesses enough millennial characteristics to certainly qualify as an honorary one.

Here are all the ways Kushner is a textbook millennial.

He Hates To Read

Gosh darn it, this guy really hates reading. It’s something that ultimately tripped up the young mogul as owner of The Observer. A brilliant Tablet magazine profile by Chris Pomorski recounted a telling anecdote. “Asked during a Q&A with staff to name some of his favorite recent articles, Kushner managed, after an awkward pause, to identify one story, about real estate,” Pomorski writes. Kushner’s excuse was priceless: “I don’t really think I’m your target audience.”

You know who else hates reading? Millennials. We love our podcasts. We love our friends’ posts on social media. But we just aren’t big readers for reading’s sake.

Especially when it comes to current events, we don’t seek out news; we prefer to let it come to us. Sixty percent of us millennials admit that we mostly bump into news and information when it happens to cross our paths, with fewer than four in 10 of us claiming that it’s very or extremely important to us personally to keep up with the news.

Instead, He’s a Scanner

Instead of being readers, we millennials are big scanners. In his book “Grown Up Digital,” Don Tapscott describes a new way of consuming information: “Digital immersion has given the Net Generation the visual skills that make them superior scanners,” he argues.

So, too, with Jared Kushner. In his statement, Kushner explains the events that lead him to the disastrous meeting with the Russians promising dirt on Hillary Clinton. “That email was on top of a long back and forth that I did not read at the time,” he writes. “As I did with most emails when I was working remotely, I quickly reviewed on my iPhone the relevant message that the meeting would occur at 4:00 PM at his office.”

He Hates the Phone

Millennials are infamous for their phone phobia. We absolutely hate using the phone. If we have any excuse to avoid it, we will.

Well, the same is true of Jared Kushner, it turns out. In his statement, Kushner tells a long tale outlining his own phone phobia. While he claims to have participated in “thousands of calls,” his emphasis is on the calls he didn’t take. “We have reviewed the phone records available to us and have not been able to identify any calls to any number we know to be associated with Ambassador Kislyak and I am highly skeptical these calls took place,” he insists. “A comprehensive review of my land line and cell phone records from the time does not reveal those calls.”

You know what, Kushner? Since you’re a classic millennial, we believe you!

He Loves Bragging About How Popular He Is

As Eisner points out in her op-ed, “Kushner portrays himself as so immensely popular that he couldn’t possibly read all the emails sent to him during his father-in-law’s campaign.”

Is there anything more millennial than constantly complaining about how busy you are, or how many emails you have to respond to, or how exhausting your social media popularity is?

Still not sure exactly what Kushner’s professional role is? You’re not alone! From the opioid epidemic to the Middle East and back again, he has been tasked with tackling it all — something many millennials are eager to do as well.

Almost a quarter of millennials report having changed jobs within the past year, a rate that’s three times the national average for non-millennials. This inefficiency isn’t just annoying for the companies left in the dust; it costs the U.S. economy $30.5 billion a year.

If at first you don’t succeed, Jared, maybe try sticking to just one thing.

Like most male millennials, Kushner has many friends. As Politico has reported, those close to Kushner call him a longtime “collector of people,” a perpetual crowdsourcer, schmoozer and social climber. He clearly relies on them to make decisions and preserve his social status.

This, too, is par for the millennial course. According to a 2016 study, only half of the people whom millennials cite as friends say the feelings are mutual. And two-thirds of millennials would eagerly shed a friend to get ahead at work. Ouch.

All’s a Swipe in Love And War

You know those guys who date you then disappear? Or those guys who date you for months, even years, but refuse to call it “dating”? That’s Jared Kushner and the Russian ambassador. “I had no ongoing relationship with the Ambassador before the election, and had limited knowledge about him then,” he insists in his statement. “In fact, on November 9, the day after the election, I could not even remember the name of the Russian Ambassador.” It’s classic millennial: “Love her? I barely know her!”

He’s Not All Millennial

There’s one crucial way in which Kushner is bucking millennial trends: He married a New Jew. Ivanka Trump is a practicing Modern Orthodox Jew — and a new Jew to boot. Despite the cynicism of many, I believe her embrace of Jewish tradition and the positive exposure she’s given them are both beautiful and powerful. Hand-wringing Jews of all generations concerned about intermarriage have at least one good reason to celebrate their union: By marrying a Jewish woman, Kushner is bucking a millennial Jewish trend. A full 58% of Jews who got married between 2005 and 2013 married non-Jews (the Kushner-Trump union occurred in 2009).

But He May Be More Millennial Than Jew

You know who absolutely lives to read? Jews. Six in 10 Jews say that Judaism is mainly about “ancestry, culture and values” rather than religion. And we can all agree that a pervasive Jewish value since time immemorial is reading and learning. One of the first dozen commandments Jews are given in the Bible is to teach our children Talmud Torah — the wisdom of Jewish law and teachings. And you don’t have to spend all day learning in a yeshiva to know that this is a serious time commitment.

And it’s not just religious Jews who commit themselves to such study. As David Grubin wrote in a tout for his series on the Public Broadcasting Service “The Jewish Americans”: “Known as the people of the book, Jews valued education long before migrating to the United States. In America, education is the great leveler; it is the one thing that Jewish Americans immediately embraced as a path to opportunity for themselves and their children.”

Sure, Kushner went to Harvard, but can it really be called “valuing education” if you buy your way in?