This Tisha B’Av, I’ll Mourn For The Destruction Of Jewish Unity 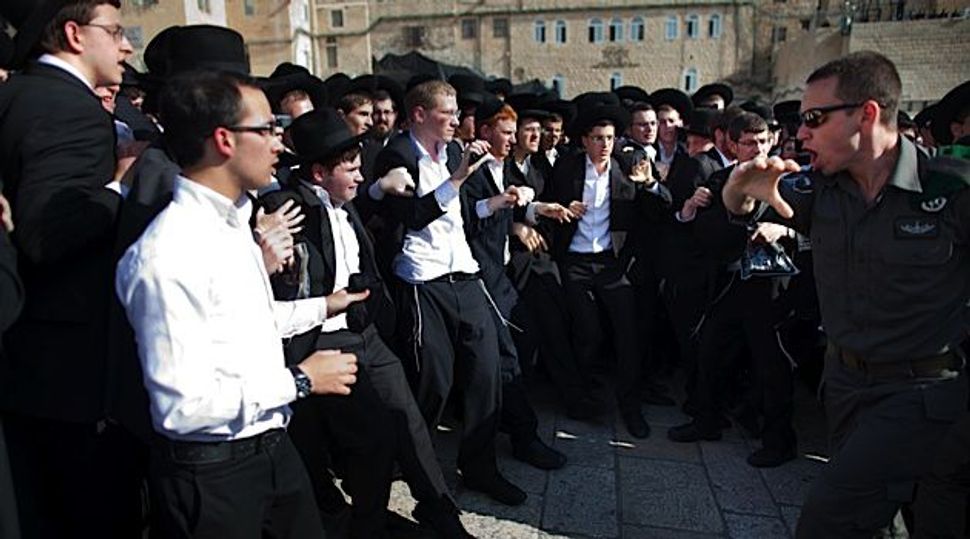 Prayer Protest: Haredi youth gathered early this morning at the kotel to prevent egalitarian services hosted by the group Women of the Wall. Image by getty Images

When the Israeli government announced its decision last month to halt the construction and planning of a pluralistic prayer space near the Western Wall, the outcry from the Diaspora Jewish community was enormous. The proposed plan didn’t even offer a shared space at the Western Wall; it referred to an area further south by Robinson’s Arch. And yet even this acquiescence was too much for the ultra-Orthodox segments of the government.

The timing of this recent controversy, though, couldn’t come at a more poignant moment in the Jewish calendar as we find ourselves marching towards the 9th of Av, the anniversary of the day when the Temple was destroyed. This time period in the Jewish calendar is a somber and reflective one, a time of mourning for the brokenness of Jerusalem.

For thousands of years, we Jews were a homeless and nomadic people. Our yearning for Zion was always prominent in our prayers as we learned to adapt to host countries and societies. Our commitment to the Hebrew calendar, marking our festivals, gave us a metaphysical space to meet God when our physical land was not open to us. Now, though, when we Jews have the liberty to freely visit Jerusalem and live there, the brokenness of Jerusalem has taken a new form.

The book of Exodus is emphatic: “You shall have no other gods besides Me. You shall not make for yourself a sculptured image, or any likeness of what is in the heavens above, or on the earth below, or in the waters under the earth. You shall not bow down to them or serve them.” The Talmud in Megillah 13a seems to go a step further than the Ten Commandments, claiming, “Whosoever denies idols is called a Jew.”

When Moses witnesses the people worshipping a golden calf, he thrusts the tablets that have God’s writing engraved on them. “Yasher koach,” the rabbis imagine God saying to Moses once he breaks these sacred stones — an idiomatic equivalent of “good job.” When our ultra-Orthodox brethren throw rocks of their own at women who seek to read the Torah at the Kotel, can we honestly say we have heeded Judaism’s charge and not made an idol out of this Western Wall?

Of course there are concepts of sacred space and objects in Judaism. Indeed, Jerusalem is considered Judaism’s holiest city, the abode where the Temple and its Holy of Holies once stood. We bury Torahs, phylacteries and books that contain God’s name. We kiss mezuzahs when we enter our homes and we circumcise our sons as a sign of an ongoing covenant with the Jewish people.

That’s because these objects are more than objects and spaces; they are symbols. “And it shall be a sign for you,” the first paragraph of the Shema prayer fundamentally asserts. They are symbols of a relationship we aspire to have with God and what is holy, and using or treating them in a profane, idolatrous way defeats their purposes. Moreover, the sanctity of these spaces and things are in no way greater than the biblical charge to love our fellow Jew and treat each human being with dignity and respect.

There was a time only decades ago, before Jewish sovereignty in Jerusalem, where men and women prayed side by side at the Kotel. This was before the Western Wall became an ultra-Orthodox synagogue. Adhering to the most religious common denominator should not be the arbiter of what we do. Finding a resolution that suits all parties is the task at hand, and Jewish Agency chairman Natan Sharansky’s proposal was an attempt at that. I pray that project will still be successful, as I believe it to be in Judaism’s best interest.

The Kotel – merely an outer wall to what is truly our most sacrosanct site – has distracted us from what ultimately matters. Human life is holy. The pursuit of a relationship with God and Judaism is sacred. What if instead of kissing old stones, we greeted the homeless and hagglers at the Western Wall plaza with greater compassion? Do we not read the words of Jeremiah in Lamentations bemoaning the barbarism that led to the destruction of the Temple? Have we really progressed all that much when our brethren throw feces at girls who attend a religious school that is not in accordance with their own ideology?

This 9th of Av, I will fast, but not for the destruction of the Temple alone. I will mourn the destruction of the human temple, the desecration of God’s name we Jews perpetuate when we cannot model healthy compromise and loving debate. If our tradition tells us that the Temple was destroyed because of senseless hatred, can we honestly say we’re doing any better, thousands of years later?

This Tisha B’Av, I’ll Mourn For The Destruction Of Jewish Unity