This Tisha B’Av, Let’s Remember the 2,000 Year History of Women of the Wall 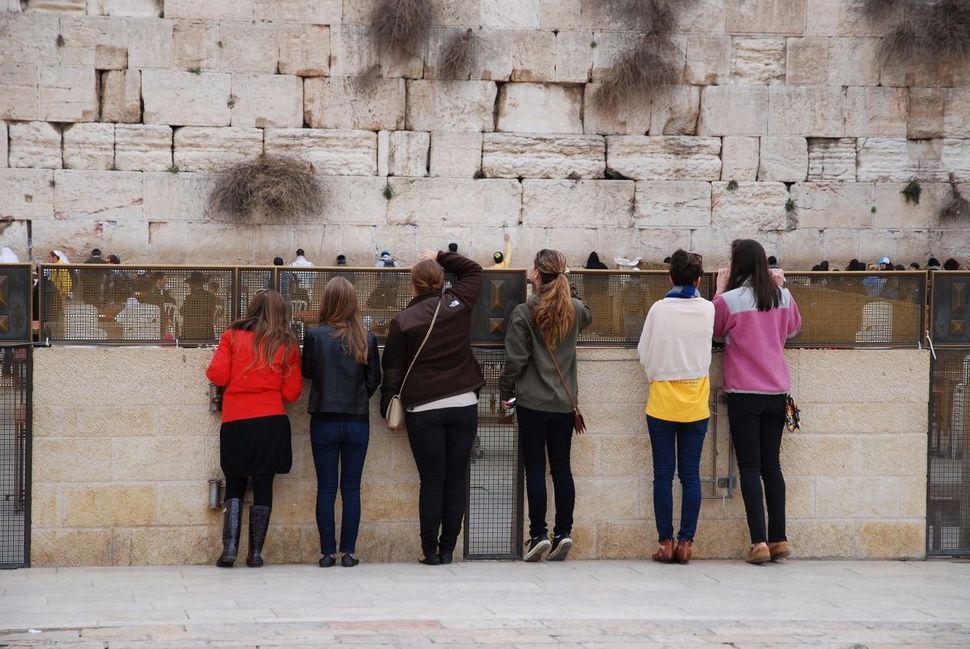 There is a story in the Talmud about an incident that occurred after the death of Rabbi Meir. His rival, Rabbi Yehuda, declared that Rabbi Meir’s disciples would henceforth be barred from the study house. But one of Rabbi Meir’s students forced his way in, and quoted a teaching about a priest who betroths a woman in the Temple courtyard.

Indeed – she could. In Talmudic times, she wouldn’t even have to force her way in. As the Talmud tells us, women were permitted and even required to enter parts of the Temple, provided that they were ritually pure. In fact, they had to sacrifice of a bird after giving birth to a child; nearly all the examples in tractate Qinnim, which deals with such bird offerings, are about women. They also brought sacrifices as Nazirites, and they brought their first fruits to the Temple on the holiday of Shavuot. Women were allowed to wield the knife and slaughter their own sacrifices, and an entire section of the Temple was referred to as the Women’s Court.

These days, a woman’s right to pray as she wishes at the Kotel is being fiercely contested. For years, the ultra-Orthodox have tried to control who is allowed to pray in the Temple courtyard, and how they may do so. Fifty years ago, when the Israeli army conquered the Old City of Jerusalem during the Six Day War, the Chief Rabbinate of Israel launched a political battle for control of the site. They won that battle, and the Kotel, which had once been the site to which Jews from all the world made pilgrimages three times a year, became the province of one sector of the Jewish people.

I remember visiting the Kotel with members of my American Conservative synagogue a couple of years before my bat mitzvah in the early 1990s. We knew we weren’t allowed to pray as a mixed-gender group at the Kotel itself, but it was important to our group that we daven together as close as possible to the holy site. Huddled in a small group of men and women, we brought our own Torah scroll and stood about thirty feet away, at the other end of the Kotel plaza, quietly conducting our own service. We were hissed at. An old woman spat at me. Children in dark kippot and sidelocks pointed fingers at us and their parents quickly pulled them away and wagged their fingers in our direction. I felt dirty and ashamed, and when my mother encouraged me to approach the wall and insert the prayer I had written on a small piece of torn looseleaf paper, I refused. The Kotel was no longer a place where I wanted to direct my prayers.

Then, in 2003, thanks to the efforts of Women of the Wall, a group of feminists who had been praying together at the wall since 1988, the Supreme Court of Israel issued a ruling permitting women’s and mixed-gender prayer at Robinson’s Arch, an archeological park at the southern end of the Wall.

But now even this option may no longer be available to us. In January 2016 the Israeli government approved of a plan that would expand the egalitarian prayer space at Robinson’s Arch with more convenient points of access that would integrate the area with the rest of the Kotel complex. But recently, on June 25th, that accommodation collapsed in the face of ultra-Orthodox pressure on Prime Minister Netanyahu, who rescinded the plan for shared prayer space, thereby alienating North American Jewish leaders and widening the rift between Israel and Jewish communities in the Diaspora.

This reversal is especially painful on Tisha B’Av, the Jewish day that commemorates the destruction of the Temple. On this day in particular, one longs to approach the Kotel, our last vestige of that Holy Temple, and pray as a community. And yet, for many Jews, it is not possible to pray as they wish.

As Tisha B’Av approaches, I remember the story from the Talmud of a woman forcing her way in. I remember the women who entered the Temple to bring sacrifices. They weren’t merely allowed in; they were mandated to bring these sacrifices.

This Tisha B’Av, Let’s Remember the 2,000 Year History of Women of the Wall