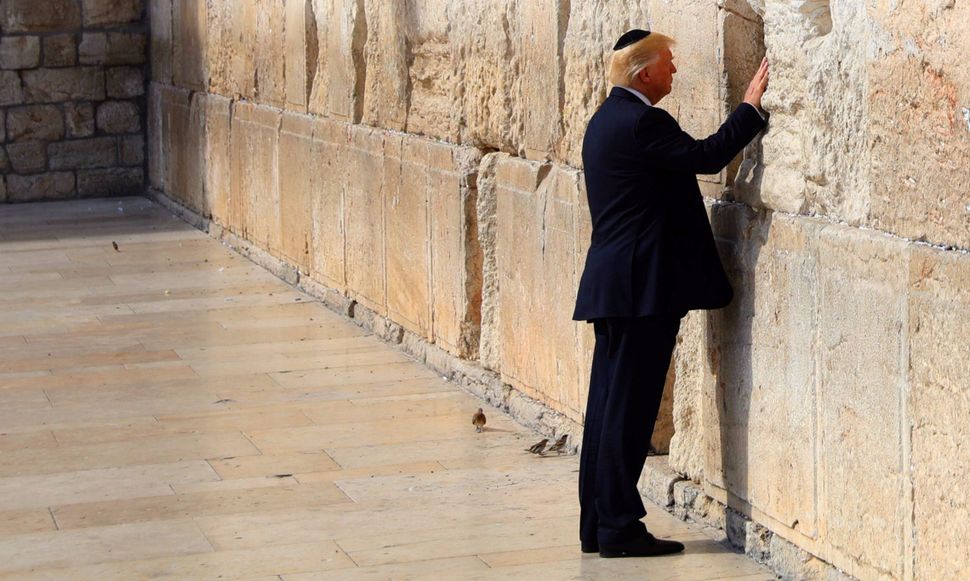 Over the past two days, we have been flooded with horrifying images of the largest white supremacist demonstration in decades. We’ve also been met with President Trump’s shameless failure to condemn the white supremacists. A president who has no qualms condemning journalists for doing their jobs, or retailers for not carrying his daughter’s handbags, could not bring himself to condemn white supremacy as abhorrent racism.

But even more disturbing than Trump’s equivocation was a deafening silence closer to home. While Trump has been widely condemned for his insistence that the violence of the weekend came from “many sides,” one group has failed to make their voices heard. The Orthodox and ultra-Orthodox leadership has, in general, refused to condemn the President’s anodyne response, and it’s embarrassing.

The Orthodox Union took two days to put out a statement in response to the weekend’s events. And when they finally got around to it, the statement danced around any mention of the Trump administration itself, calling instead on “ local, state and federal officials” to ensure justice is served. The Rabbinical Council of America mourned “violence and bigotry”, but not our leader’s failure to condemn it. Agudath Israel, the organization that represents America’s ultra-Orthodox community, has been totally silent on Charlottesville. Asked for comment, spokesperson Rabbi Avi Shafran wrote that the fact that the Agudah doesn’t issue official statements about hate crimes should itself be seen as “a function of the tragic frequency of hate crimes in our country.”

Then there are the smaller, politically conservative Orthodox rabbinic coalitions. Both TORA, which found time to welcome the appointment of Ambassador David Friedman, and Coalition for Jewish Values, which “advocates for classical Jewish ideas and standards in matters of American public policy,” ignored the weekend’s events entirely.

All of these groups have weighed in on controversies over the last year – just not this one.

You may not be as shocked as I was. After all, many Orthodox Jews voted for Trump. Still, you’d think the whole point of voting for someone is because you think they will represent you. So when the president you helped elect fails to condemn American Nazis, you would think it would be an obvious time for the Orthodox and right wing leadership to step up and make their voices heard.

Not so, it seems. The very organizations that have previously rushed with heady smiles to applaud administration policies and to pose for photo-ops with the White House’s court Jews are now speechless.

The silence on the part of right wing Jews is shameful. But it’s also mysterious. What could possibly keep Orthodox Jews from decrying a president unable to call out Nazis? In an era when any minor occurrence warrants a statement from yet another not-for-profit organization, what has suddenly caught the tongues of the so-called leadership? How truly difficult was it to release a statement? How deeply complex, how many board meetings and iterations of a document are necessary, for a junior communications professional to draft a paragraph that calls on the leader of the free world to say that swastikas are bad, that Nazis are bad?

Perhaps it stems from a shtetl-minded paranoia, a fear of upsetting the Tsar for complaining about a little pogrom. Or perhaps the President’s visceral inability to condemn white nationalism flies in the face of our diehard need for him to be “good for Israel”. Whatever the reason is, in this community, the President has become untouchable, and this silence sets a precedent for community members to dismiss white supremacists as marginal, and to construe the President’s avoidance of condemning them as normal. The leadership’s silence turns white supremacists from a threat against Jews to a partisan issue, a leftist media agenda, Luegenpresse, fake news, whatever.

Yes, we are officially living in the age in which Nazis in our midst is no longer something Jews can unite around; it’s fake news.

And it’s strange, because white supremacy used to be a valuable educational tool for the Orthodox community. Not even a decade ago, day schools and summer camps, showed us videos of KKK parades — You see, kinderlach, Nazism still exists, the Holocaust can happen again, anti-Semitism doesn’t leave, it’s lurking right under us. And wasn’t it just minutes ago that our school-teachers read to us that warm story of the Christmas Menorah, the story of the Jewish homes in Billings, Montana which were vandalized for displaying menorahs and the kind Christian townspeople who chose to display pictures of menorahs in their own windows, in solidarity? And wasn’t there an underlying message therein, a sort of uneasy warning: People hate us here in America, too, even now, in the 90’s. Pack a suitcase and keep it under your bed, just in case, just in case They might come for us again, and our Golden Age here will end. “In every generation, they rise to destroy us, and the Holy One saves us from their hands,” we sing every Passover.

And where on earth is that same concern now, when, for the first time in a good long while, it actually may be legitimate?

We have been raised in the shadow of the Holocaust. But when a tiny echo of that period emerges, when we are confronted with real-live Americans shouting, “Jews will not replace us!” and a President who remained silent for far too long — our leadership dismisses it.

It is crucial that our leaders protect us by condemning Trump’s refusal to alienate his support among white supremacists. To not do so is to remain complicit.

What a shameful missed opportunity. The silence is not just deafening. It’s damning. And one day, we will answer for it.

Correction: A previous version of this story misstated how many Orthodox Jews voted for Trump.

Avital Chizhik-Goldschmidt is the Life/Features editor at the Forward.