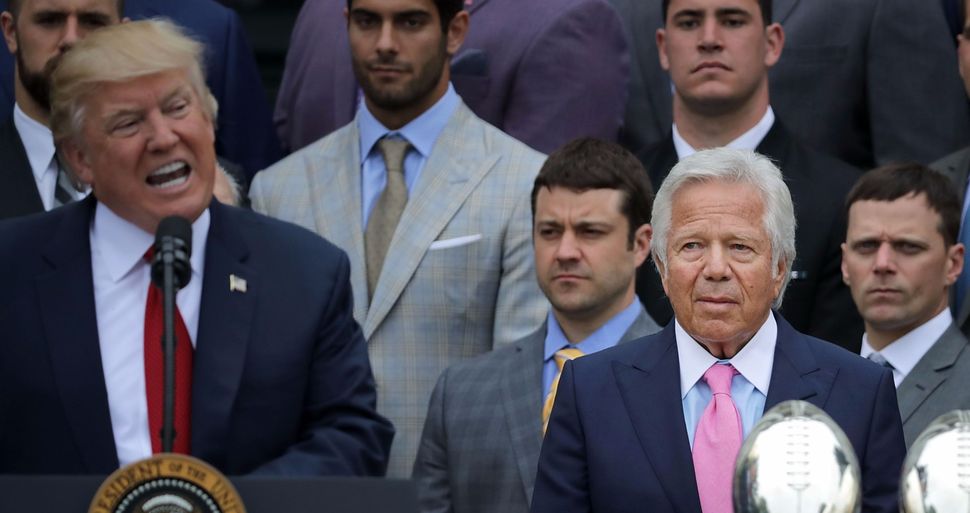 It’s bad enough for an American President to defend Nazis. It’s worse when Republican lawmakers – and American Jews – continue to support that President. I’m not talking about getting people to use stronger words of condemnation; I’m talking about deeds. And I’m not talking about nameless Trump supporters. It pains me to say it, given their tremendous generosity and support for worthy causes, but I’m talking about Jewish leaders like Sheldon Adelson, Steve Wynn, and Robert Kraft. It’s time for Americans of good conscience to stand for common decency.

Let’s start with Republican lawmakers. Republicans control Congress and the majority of state legislatures, and they are the majority of governors. While they have the power to act against the madness of Trump’s white nationalism, their response has been limp: statements of disappointment or dismay, coupled with continuing support for Trump’s policy agenda. Because many elected Republicans want to repeal Obamacare and cut taxes, they’re willing to go along with a President who promises to make those things happen. If the President also wants to implement a Steve Bannon-led vision of a national socialist America, well, these Republicans are willing to go along with that, too.

We should demand that Republicans show some common decency. They must stop talking about how unacceptable white nationalism is and start doing something about it. Republicans like Paul Ryan and Mitch McConnell should refuse to consider legislation proposed by Trump or vote for their nominees until Trump fires every single one of the national socialist cadre in the White House. Likewise, governors should refuse to participate in commissions and federal legislative efforts. If these Republicans’ oaths of office mean anything, they must take whatever actions are legally available to them to preserve, protect and defend the Constitution of the United States.

Republicans don’t feel like they need to take drastic actions like this for one big reason: They have the support of the donors who bankroll their campaigns. There are many big Republican donors – like Sheldon Adelson – who support Trump and others in large part because of their pro-Israel stance.

No doubt, Israel is a cause worth fighting for. But let’s be clear: Jewish donors who enable Trump are supporting what amounts to Nazism at home in order to support Zionism abroad. It’s a lousy, and immoral, trade-off.

It’s true for other prominent Jewish donors who have personal relationships with Trump, including Steve Wynn and Robert Kraft. These men have influence over Trump, and over the many Republicans who support him. Why have they not publicly rebuked Trump and encouraged others to do the same?

As a Jew, I grew up with stories of anti-semitism, from ancient Egypt to modern Europe. Like other Jews, my family was touched by this history – my grandfather saw much of his family murdered because they were Jews. As an American, I’ve grown up with a comfort that Nazis and pogroms are from another time, and another place. Not anymore. The events in Charlottesville and the President’s defense of marchers with torches who chanted “Jews Will Not Replace Us” make it very clear: The danger has reached our shores. Right-thinking Americans of every generation have always fought to create a country better than the one they inherited. It’s time for leaders of this generation to rise up. This madness must end.

Evan Falchuk was an independent candidate for Massachusetts Governor in 2014.