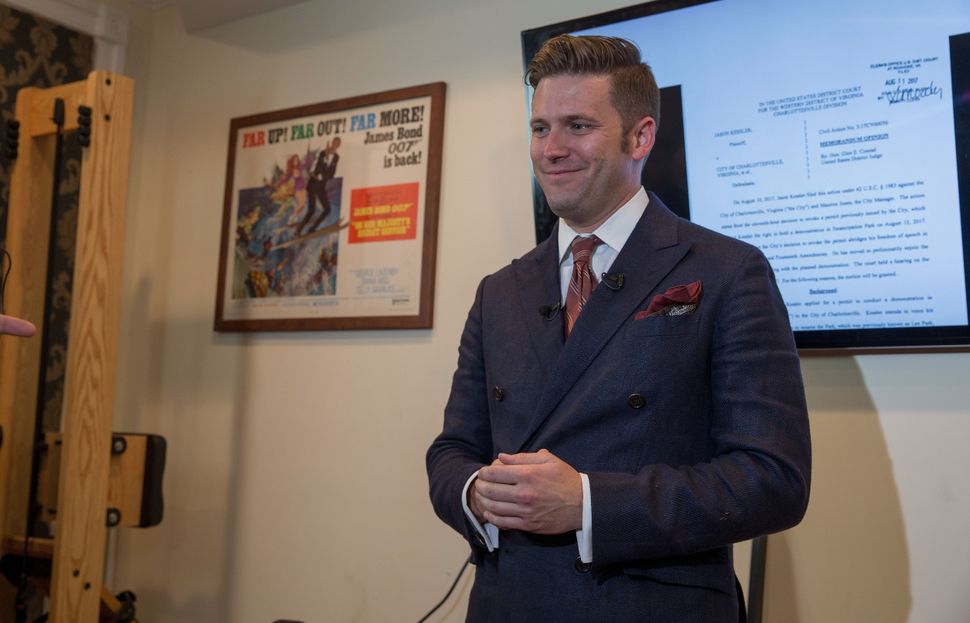 The images of Nazis and white supremacists marching in the streets of Charlottesville with torches chanting “blood and soil” shook me to my core. But so did something else that happened this week. In the aftermath of these acts of blatant racism and anti-Semitism, one of the march’s leaders, Richard Spencer, was invited onto Israeli TV. His words were chilling, but not for the reason I expected.

The Israeli TV host asked Spencer how he, a Jew, should feel about Spencer’s platform. What Spencer said was shocking:

“As an Israeli citizen, someone who understands your identity, who has a sense of nationhood and peoplehood and history and experience of the Jewish people, you should respect someone like me,” Spencer said. “I care about my people. I want us to have a secure homeland for us and ourselves, just like you want a secure homeland in Israel.” He told the Israeli host that he sees himself as “a white Zionist.”

This isn’t the first time Spencer has compared his disturbing white nationalist vision to the Zionist project. A few months ago, Spencer stunned a rabbi at an event in Texas when he said: “Do you really want radical inclusion into the State of Israel? And by that I mean radical inclusion. Maybe all of the Middle East could go move into Tel Aviv or Jerusalem. Would you really want that?”

The rabbi didn’t have an answer and he’s not the only one. This is what’s so chilling about Spencer’s comparison of white supremacy to Israel – not its anti-Semitism but the kernel of truth at its core. Richard Spencer, whose racist views are rightfully abhorred by the majority of the Jewish community, is holding a mirror up to Zionism and the reflection isn’t pretty.

Now, of course, the comparison is not literally true. For starters, we Jews have a recent history in which we really could have used a country willing to stand up for us. That’s the historical rationale for establishing a Jewish state and that distinguishes us fundamentally from white nationalists. White nationalists in the U.S. are not facing any kind of discrimination whatsoever, despite their belief that they are.

But still, there are ways in which Spencer’s description of Israel hits a little too close to home.

Looking at Israel today, we can see a state premised on the privileging of one group, and all too often perpetuating the erasure and displacement of another. We also see an obsession with demographics and the maintenance of an ethnic majority.

Then there’s the discrimination faced by Palestinian citizens of Israel (who should ostensibly have the same rights as Jewish Israelis), Mizrahi and Ethiopian Jews, and African refugees seeking asylum.

Many of us see these policies as alarming violations of human and civil rights, indeed, of our Jewish values. And the proof is in the pudding: Richard Spencer sees this as inspiration for his white nationalist vision.

But we don’t have to rely on Richard Spencer to tell us that there are other disturbing places of intersection. There is a disturbing alliance between Zionists and white nationalists in the White House these days, and it doesn’t come from nowhere. There is a shared bedrock of anxiety about demographics and racist and Islamophobic fear of “Arabs” that goes hand in hand with both worldviews.

Even ex-prime minister Ehud Barak said this week that the events in Charlottesville reminded him of fascism in Israel. He cited the example of Lehava, an anti-miscegenation gang that frequently attacks Palestinians.

Let’s not let Richard Spencer be our mirror. Let’s work instead to challenge ethnic supremacy and right-wing violence, both here and in Israel.

That means taking active steps to oppose Israel’s occupation, working for human and civil rights in Israel, and joining the movement for racial justice in the U.S. as full partners, and challenging the ways our own institutions uphold discrimination.

For too long, Jewish institutions have focused on branding advocates for Palestinian rights, and critics of the state of Israel and Zionism itself, as anti-Semitic – to the detriment of the fights against both antisemitism and racism. The reactionary response from Jewish institutions to the Movement for Black Lives platform is a prime example of how this misguided reaction to criticism of Israel has prevented American Jewish communities from working alongside Black organizers to challenge both anti-Jewish oppression and systematic anti-Black racism.

The most promising solution to anti-Semitism lies in building relationships and coalitions, recognizing how our freedoms are bound up together with those of people who have fewer rights than us, and having those difficult conversations when conflicts arise. It requires challenging the institutions that uphold supremacy, together.

That is the work, and that will, at times, require us to hold up that mirror to ourselves and to our communities. Let’s do it together.

Naomi Dann is media manager at Jewish Voice for Peace.