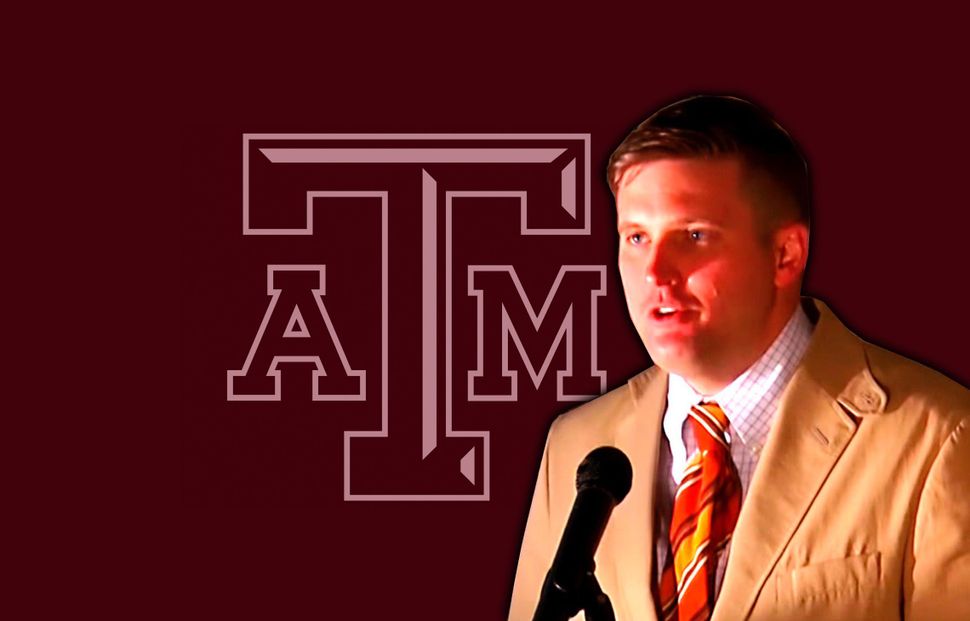 A prominent leader of the “alt-right” left a Hillel rabbi speechless when he drew a direct parallel between white supremacy and Zionism — igniting debate on social media about whether such a comparison has any validity.

Richard Spencer, who leads the white nationalist National Policy Institute, appeared at Texas A&M University in College Station, Texas on Tuesday night. Hundreds of students protested outside of the event, while others stood silently with raised fists inside the hall.

During a question-and-answer session, Texas A&M Hillel’s Rabbi Matt Rosenberg stood and invited the white nationalist to join him in Torah study. Rosenberg’s invitation, and Spencer’s response, were captured on video by The Eagle, the Texas A&M student paper, and viewed widely on Twitter.

“My tradition teaches a message of radical inclusion and love,” Rosenberg said. “Will you sit town and learn Torah with me, and learn love?”

Spencer declined the invitation, but used it as an opportunity to suggest that the objectives of Zionism and Jewish continuity were close to his own goals for white people.

Rosenberg, who later admitted he is not a good debater, stood silent.

Spencer went on to argue that Jewish continuity is predicated on resistance to assimilation. He framed that cultural imperative as similar to the movement for so-called white rights in the U.S.

“Jews exist precisely because you did not assimilate,” he said. “That is why Jews are a coherent people with a history and a culture and a future. It’s because you had a sense of yourselves. I respect that about you. I want my people to have that same sense of themselves.”

.@tamu rabbi @aggiehillel asks Spencer if he would study the Torah with him pic.twitter.com/wNEhJ7rtDc

Rosenberg later acknowledged that the confrontation wasn’t his best moment.

“I wasn’t on the high school debate team,” Rosenberg told the Forward. “I really didn’t want to get into it. That might have been the wrong decision, but I’ll let the next rabbi deal with it.”

Rosenberg, the Hillel rabbi at Texas A&M for the past three years, said he found Spencer’s attempt to get him to defend Israel erroneous and bordering on anti-Semitic.

“I am a simple teacher of Torah,” he said.

Mainstream pro-Israel groups including J Street and AIPAC did not respond to request for comment about Spencer’s remarks.

Strident critics of Israel were quick to jump on the one-sided debate between Spencer and the rabbi as evidence that Zionism shares some ideological common ground with far right political movements.

“The fact that white nationalists see something to admire in Israel is alarming,” said Naomi Dann, a spokeswoman for Jewish Voice for Peace. “In this new political era, we need to be able to have conversations in the Jewish community that grapple with the deep questions about what Israel has become.”

Max Blumenthal, an activist and harsh critic of Israel, tweeted that the incident illustrates why “Zionists are poorly positioned to confront white nationalists.”

A perfect example of why Zionists are poorly positioned to confront white nationalists: https://t.co/JVpZJRkJHx via @joshnathankazis

But Mort Klein of the Zionist Organization of America forcefully disagreed with the comparison between white nationalism, calling it “a false and absurd analogy.” “Arab Muslims and Christians make up a full 20 percent of Israel’s population and have the same rights there as everyone else,” he told the Forward. “Jews, we maintain our own culture, but always have relationships with people from other groups, his statement is ridiculous.”