As a Religious Zionist, My First Encounter With A Palestinian Changed My Life 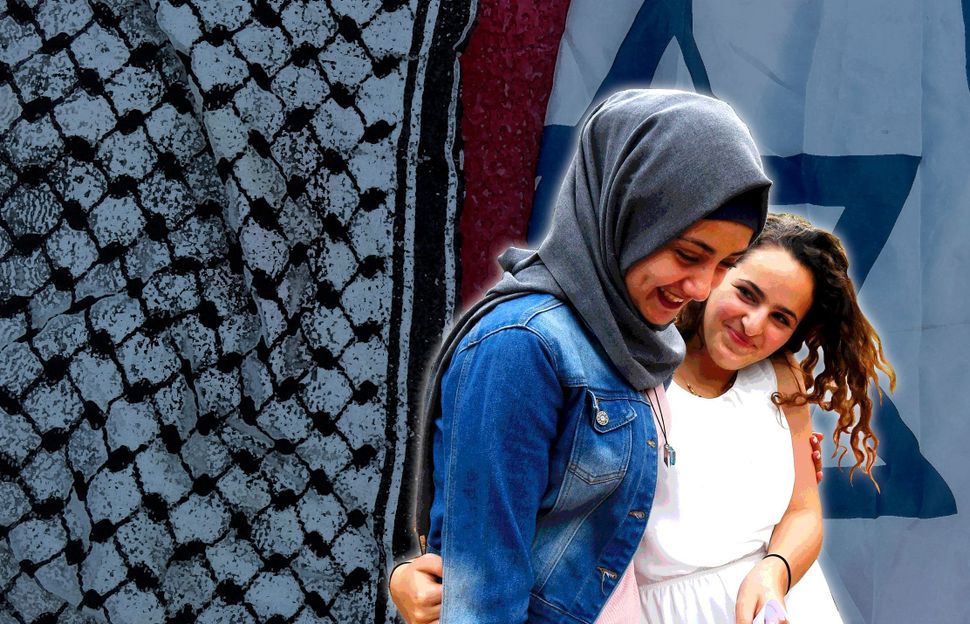 In a well-lit basement room in the East Jerusalem neighborhood Sheikh Jarrah, a group of kids and adults are standing in a circle tossing a ball. This group is made up of seventh graders — Muslim, Christian and Jewish — all residents of Jerusalem; their parents and counselors are also present. I am in the group with my thirteen-year-old daughter.

These seventh graders and their parents have been meeting every other week for the past 6 months as part of the youth group Kids4Peace. K4P is an interfaith group, a place for kids and parents of different faiths to get to know one another.

The meetings stay away from politics, and focus on topics we can all relate to. The kids’ meetings focus heavily on topics we can all relate to, like learning about the different neighborhoods in the city. In the parent’s group, we have sessions like the speed-dating parenting game, where we pair off with a question about parenting, then move on to a new partner and a new question. Many of us agreed that the best times were in the moments after answering the question, when others were still answering; there was time to make small talk and chat with one another one on one, which felt like the best relationship building.

We are tossing the ball as part of an ice-breaker game. We go around the circle, saying our name, which kid or adult is our child or parent, and which neighborhood in Jerusalem we live in. The game is to call out someone’s name and toss them the ball.

I stand in the circle, preparing to call out someone’s name and toss the ball. In the 12 years in which I have lived in Jerusalem, K4P is the first time I’ve met with Palestinians in a social setting.

After every meeting, on my walk back to the train station, I whisper the names of the men and women in the parents group to myself, trying to learn them by heart. Maya, Amir, Munir, Maher. Nisreen, Jihan, Suhad. Rula, Tamam. Adam, Yisrael, Chaya, Chana. I don’t usually forget a face, but I rarely remember a name. It’s very important to me to learn the names of everyone in the group.

Week after week, we gather. 5:30-7:30 is a difficult time to meet. Most parents come after a long day at work. Many are leaving younger children at home during the hectic hours of dinnertime and bedtime. For most of the meetings I bring my one year old son with me. He nurses, or sits on the floor pulling everything out of my wallet, or makes noise while I shush him. Not all of the parents attend every session. But the parents who come regularly are starting to get to know one another, forming tentative friendships.

In our first meeting, we are asked to write down five words that describe our identity. I think about how to define my identity. American? Israeli? I put down “immigrant,” a word that describes my experience bridging two cultures. As we go around the circle and everyone shares their self-descriptions, I am shocked to hear every Arab participant self-identify as Palestinian. I had thought that we were all Israeli, both Jews and Arabs. Don’t we all live in Jerusalem?

As a Jewish kid growing up attending religious day school and high school, I saw Israel portrayed as the homeland and the heart of the Jewish people. As I formed my own religious identity through Torah learning, I came to view Israel as the land promised by God to the Jewish people. I saw moving to Israel as a mitzvah and the fulfillment of God’s wish for the Jewish people. I have never been very politically aware. Certainly, I studied modern Jewish History – from a Jewish perspective, that of the miraculous story of our return to our land and our victories from our enemies. I was unaware that all this time, I was only hearing my people’s side of the story.

I never had a sense that I was living out my religious dream on the backs of another people. I didn’t know the history. I didn’t fully understand what had happened in the Six Day War. I didn’t know that the Arab residents of East Jerusalem don’t have Israeli citizenship, that they self identify as Palestinian.

We go around the circle reading our five words. When we get to Rula, she throws her five pieces of paper down onto the table in front of her and begins to cry. She tells of us her five-year struggle to obtain a Jerusalem identity card for her husband. During those five years, she lived in Jerusalem with her mother and small children, while her husband lived in the West Bank. For her, the word “identity” is so closely related to the “identity card” that it was painful.

After that night, I go home and begin to research, to read, to try and educate myself about the history and politics at work in my city, of which I had been so blissfully unaware. I feel driven to understand the worldview of the Palestinian participants in Kids4Peace.

In the very last group session, we are given space to bring up any expectations we had that hadn’t been met. Some members of the group bring up their wish to go deeper, to discuss the things we hadn’t yet discussed, which might be much more difficult; the politics; the places where our ideologies are at odds. We spend much of that last meeting talking about how there are things we didn’t talk about.

That awareness was painful. I had felt optimistic throughout, but on that last day I felt hopeless, knowing that our friendliness to one another would be sorely challenged if we would get into deeper topics.

That meeting was followed by a tour of Sheikh Jarrah, led by a woman who grew up there. I was touched hearing about her love for her neighborhood. I was deeply saddened to hear of her family’s fear that their ancestral home may be taken from them by Jewish settlers. I felt confused about her use of the term “settlers” in Jerusalem.

Because of my experience participating with K4P, Yom Hazikaron – the national day of mourning Israel’s fallen soldiers — felt more devastating this year than in previous years. And on Yom Haatzmaut, the Day of Israeli Independence, it was difficult for me to connect to the joy and gratitude I have felt in past years, for the gift of the State of Israel.

I can’t see Israel the way I used to, with just my side of the story. In shul on the morning of Yom Haatzmaut, I said Hallel with a heavy heart, with many questions.

I thought about how on Passover during the seder, we sing dayenu right before the first two psalms of Hallel. Why? Because in every line of dayenu we say to ourselves: “If God had given us part of a gift, but not the whole gift, dayenu” – it’s enough. It’s not really enough, and we know it. It would not have been enough to get to Har Sinai and not receive the Torah. But it would have been enough to merit an expression of gratitude, Hallel.

When I remembered that, I felt comforted, and I wrote a new line of dayenu for myself. I can still thank God for the gift of the state of Israel, even while recognizing that it is not yet ideal.

After our last meeting, I wanted more. I wanted to keep up the relationships I had begun to forge. I met with Jill Levenfeld, Parents Program Coordinator of K4P, and we created a “chavruta” program, a way to pair up Palestinian and Israeli parents and facilitate one-on-one meetings to strengthen individual relationships over the summer. Jill met with two pairs of parents, and their experiences were moving and transformative.

Participating in K4P was a catalyst for me. It opened my eyes to the other side of the story of the state of Israel. It led me to become aware of the brokenness that exists. And it also gave me a glimpse of the simple sweetness of human connection. For both, I am truly grateful.

Nava Levine-Coren is a scribe and illustrator. She lives in Jerusalem with her husband and their five children.

As a Religious Zionist, My First Encounter With A Palestinian Changed My Life