When It Comes To The Middle East, Liberals Need To Be Trump’s Biggest Cheerleaders 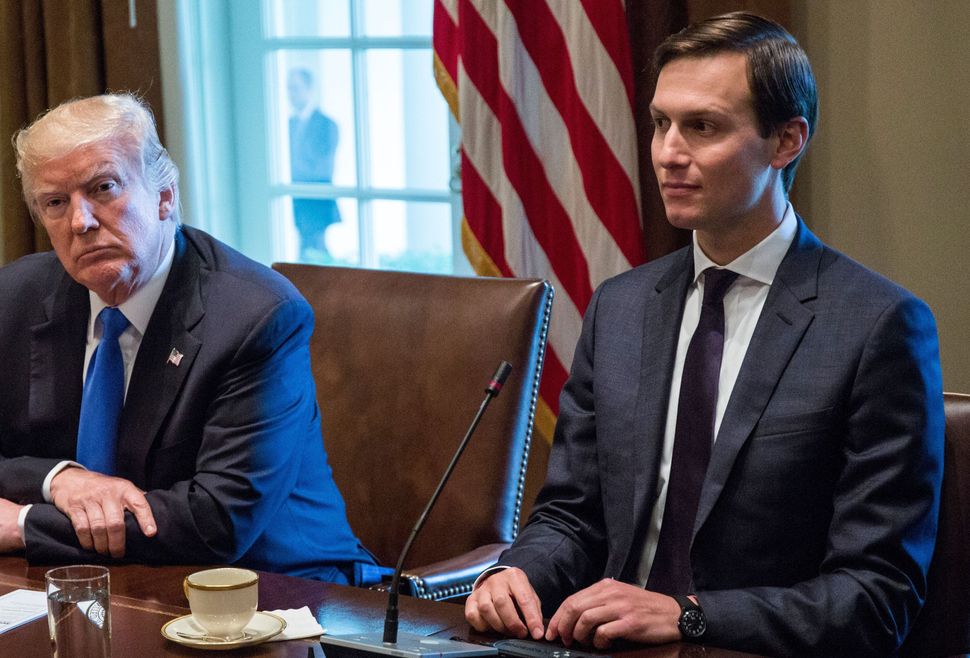 On Wednesday night, Jared Kushner, along with Jason Greenblatt and deputy national security adviser Dina Powell, arrived in Israel ostensibly seeking what President Trump has taken to calling “the ultimate deal” between Israel and Palestine. Liberals may be tempted to mock these efforts at best and to hope they will fail at worst. But these are both misguided responses. Though liberals may oppose Trump on every other issue, the President should have the support of liberals and progressives and even the “resistance” on the topic of peace in the Middle East.

It’s not an easy proposition. For starters, the odds that his efforts will succeed are incredibly low. Not only is there a vast gulf between the two sides on the critical issues of territory, refugees, and holy sites, but the Trump administration itself is astoundingly unprepared for a major diplomatic endeavor.

The State Department is woefully understaffed; the Middle East peace portfolio is currently in the hands of the president’s son-in-law, Jared Kushner, who has absolutely no diplomatic experience to speak of; and potential crises like North Korea threaten to snatch away the attention of the administration’s wafer-thin foreign policy team.

Still, there are some reasons for optimism. In May, the president’s national security adviser, H.R. McMaster, stated that President Trump, during his own trip to the region, would aver “desire for dignity and self-determination for the Palestinians,” in addition to tending to the longstanding alliance between the United States and Israel. Self-determination for the Palestinians and security for Israel can only emerge through a two-state solution, which the President was at first reluctant to commit to. McMaster’s statement indicates the time for ambiguity has ended.

Trump has also appeared to sideline the Republican mega donor Sheldon Adelson, a longtime patron of Israeli opposition to progress on two states. Instead, according to several reports, Team Trump is now relying on the advice of Ronald S. Lauder, a billionaire former ambassador to Austria who is also the president of the World Jewish Congress (for the purposes of disclosure, I once briefly interned at this organization).

Lauder, while conservative, is a staunch supporter of a viable two-state solution. He fell out of favor with Israel’s hardline prime minister, Benjamin Netanyahu, after an Israeli television channel owned by Lauder ran a story critical of the prime minister and his wife. According to a recent report in The New York Times, Lauder recently hosted a dinner meeting between Jason Greenblatt, the administration’s chief envoy for negotiations, and Palestinian president Mahmoud Abbas.

Additionally, the ouster last week of Stephen Bannon from the position of Chief Strategist was a victory for McMaster and other traditional supporters of the two-state solution, who were targeted by the Adelson-backed Zionist Organization of America.

The Israeli newspaper Haaretz also previously reported that Greenblatt was taking advice from Tzipi Livni, a liberal former foreign minister of Israel. It’s a fact which has apparently unnerved allies of Netanyahu. Livni participated in the 2007-2008 round of negotiations, widely considered to be the closest the sides have come to reaching a final status agreement.

If the administration publicly declares its support for the two-state solution, which it has so far been reluctant to do, President Trump’s sheer determination to be the president who sealed “the ultimate deal” may be enough to get the two sides to at least take the process seriously.

The process can still, of course, fall apart. It’s important the President be willing to accept interim progress, lest a vacuum once again open up in the wake of failed talks. But if he is earnest about achieving peace between Israel and Palestinians, he should have the support of liberals and progressives, especially those who identify as part of “the resistance,” who would ordinarily oppose him on every other issue.

First, because Trump will have little intellectual support in Republican policy circles for persuading Israel to rein in settlement construction in the West Bank, an important prerequisite to restarting meaningful negotiations. Indeed, much of the remaining “Never Trump” camp consists of neoconservative figures who were critical of the Obama administration’s efforts to reach an agreement.

Furthermore, Trump is also unlikely to retain the support of crucial hawkish Republicans on Capitol Hill, a group that includes senators Tom Cotton, Marco Rubio, and Lindsey Graham, all of whom have expressed deep skepticism of the peace process. Only Democrats can fill this void, and they will not do so if they fear even uttering the mildest statement of support for the administration.

But it is also a moral imperative that progressives do not, even unwittingly, become opponents of peace. Yes, a successful agreement may boost Trump’s chances at reelection, but so can many other potentially positive factors outside of our control. If we do not root for a higher unemployment rate, we should not hope for yet another failure to achieve peace in the region. We need not become narrow-minded narcissists ourselves to defeat the one currently occupying the Oval Office.

Abe Silberstein has written on Israeli politics and U.S.-Israel relations for Haaretz, The Jerusalem Post, and +972 Magazine.

When It Comes To The Middle East, Liberals Need To Be Trump’s Biggest Cheerleaders