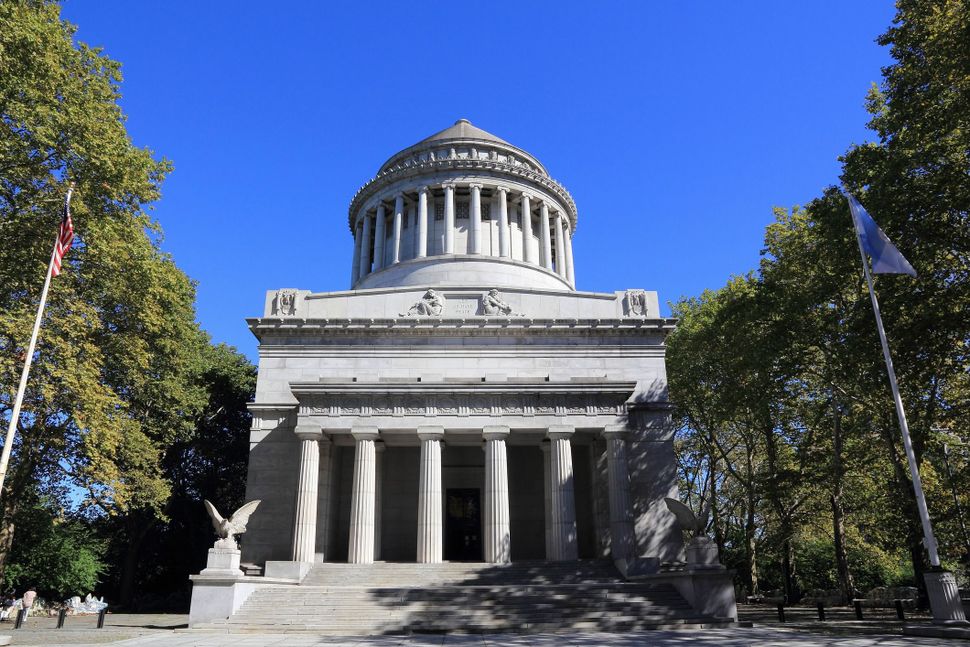 As Confederate monuments tumble across the United States, it comes as no surprise that other longstanding monuments now face closer scrutiny. On Tuesday, a Jewish organization named Shurat Hadin called for the removal of statues to New Amsterdam’s disabled governor, Peter Stuyvesant, on the grounds that he was “an extreme racist who targeted Jews and other minorities including Catholics and energetically tried to prohibit them from settling in then New Amsterdam.” On the same day, New York City’s CBS2 political reporter Marcia Kramer challenged Mayor William de Blasio concerning the fate of Grant’s Tomb, recalling that General Ulysses S. Grant, in the midst of the Civil War, had expelled “Jews as a class” from his warzone in a bid to counteract smuggling. Abraham Lincoln overturned that order as soon as he learned of it.

The Stuyvesant statues and Grant’s Tomb exemplify the many complexities involved in re-evaluating monuments — what the French historian Pierre Nora famously called “places of memory” — from the perspective of contemporary sensibilities.

In the case of Peter Stuyvesant, New Yorkers have understandably celebrated him as the longest-reigning and most successful Dutch governor of what in his day was called New Netherland. He promoted commerce, reshaped municipal government, maintained social stability, and avoided war – even when that meant, in 1664, capitulation to the British. “Under his administration,” a recent biographer writes, “New Netherland evolved from a struggling outpost of European settlement to an established transplanted European society.”

At the same time, Stuyvesant was a Dutch Calvinist zealot. He hated Catholics and Lutherans, He endeavored to keep Jews (whom he labeled, among other things, “hateful enemies and blasphemers of the name of Christ”) out of his colony altogether. And he oversaw the public torture of a twenty-three year old convert to Quakerism, the preacher Roger Hodgson.

Yet when his superiors back in Holland demurred, ordering him to admit the Jews and to “allow every one to have his own belief, as long as he behaves quietly and legally, gives no offense to his neighbor and does not oppose the government,” Stuyvesant listened. And after he left office, he lived on in what had become New York, notwithstanding its growing religious pluralism and the declining fortunes of his own beloved Dutch Calvinist church. As a final irony, in 1671 one of those whom Stuyvesant had persecuted and sought years before to deport, a Jew named Asser Levy, served as a juror in a case where Stuyvesant was the defendant. The jury, including Levy, found in Stuyvesant’s favor.

The key question raised by Stuyvesant’s statue, then, is how to balance his good and bad deeds. Do his blind spots render it impossible to honor him in the city he helped to create, or might they remind us that human beings generally are prone to suffer from acute moral blind spots? And what about Stuyvesant’s apparent ability to change over time? Might we, in gazing down upon him, honor him for that?

Change over time likewise bears on the question of whether to maintain Grant’s Tomb. Should we perpetuate the memory of the general who led the Union army to victory in the Civil War, befriended Native Americans and African Americans, and served as America’s 18th president? Or should his notorious December 17, 1862 order (known as General Orders No. 11) expelling “Jews as a Class” from his warzone forever disqualify him?

General Orders No. 11 became a major campaign issue in 1868 when Grant ran for President. Once elected, he issued an unprecedented public apology for his earlier action: “I have no prejudice against sect or race, but want each individual to be judged by his own merit, “ he declared. “Order No. 11 does not sustain this statement, I admit, but then I do not sustain that order.”

During his eight-year Presidency, Grant went out of his way to prove just how unprejudiced he had become. He appointed more Jews to public office than all previous presidents combined, became the first President to attend a synagogue dedication, and actively intervened on behalf of persecuted Jews in Russia and Rumania. After he left office, he maintained friendships with many Jews, became the first President to visit the land of Israel, and, in 1881, placed his name atop a call for a public meeting of protest when anti-Jewish violence broke out in Russia. One senses that whenever he interacted with Jews, and especially when he saw them persecuted, embarrassing memories of General Orders No. 11 flooded into Grant’s mind. He spent the last two decades of his life making amends for the order that stained his career, and trying to live it down.

Jews in Grant’s day accepted his apology and celebrated the fact that he had grown and changed. When Grant died, in 1885, synagogues across the country joined in mourning him. One rabbi went so far as to walk the entire seven-and-a-half mile funeral parade route from City Hall to the Riverside Park vault where Grant was initially buried, just to avoid violating the Jewish Sabbath. He continued to honor Grant annually for more than thirty-five years, and was the last of Grant’s pallbearers to annually appear at the tomb.

Sadly, those who seek today to knock past heroes off their pedestals rarely stop to study the full history of those whose reputations they seek to sully. The cases of Stuyvesant and Grant serve to remind us that human lives are complicated, that everyone makes mistakes, and that truly great leaders learn from those mistakes and improve their ways.

Instead of trying to tear down monuments to all those with blemished records, citizens would be better served by more intense study of the lives of those whom past generations revered. We may find that there is much to learn even from flawed heroes’ mistakes.