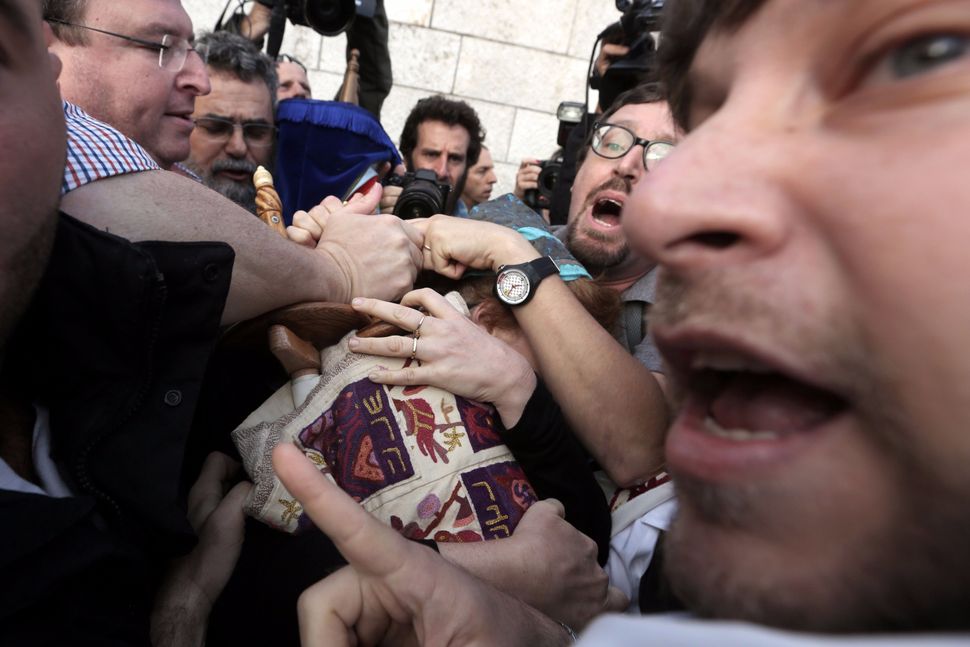 It was Wednesday morning of finals week. The thought of waking up at 5:30 AM was not the most thrilling of thoughts; but, Rosh Chodesh aligns with the cycle of the moon, not with the cycle of my school year. I had committed to welcoming in Elul at the Kotel with my Hebrew Union College-Jewish Institute of Religion community and Women of the Wall, so out into the early morning air I went.

This was my second time joining Nashot HaKotel. I knew what to expect from the jeering Orthodox women who would be separated from WoW by only a small jumpable gate. I knew that there would be whistling and screaming, spitting and pushing. I knew that the guards “welcoming” me in would search my tallit bag to make sure that I was not sneaking in any words of Torah. I knew that getting through security would be a long process, yet one that would be worth it once I was able to join the community of progressive Jewish women fighting for their right to pray at the Wall just like the men do.

All of this foresight, and yet I still was not prepared.

I had dressed appropriately for a visit to the Kotel – a long skirt and a tank top covered by a cardigan. Modest and respectful, as defined by the culture of the Kotel. As I approached the security guards at the entrance to the Western Wall, I put my purse and my tallit bag on the table and walked through the metal detector – very aware that everything I was doing was being filmed. Within an instant, the female security guard started walking toward the opposite side of the room and yelling at me in Hebrew to “come” follow her. The Hebrew became a blur as she was yelling directions at me while the men were yelling directions at her. There was no moment to think before she had edged me into a tiny, utility closet-sized room. She continued to point, making it clear that I was supposed to go to the area which was secluded enough so that no one could see.

She told me to take off my cardigan. She gave one look around my torso, since the tank top I was wearing was fitted to my body, and then it happened. She told me to lift up my skirt.

In looking back, I wish I had been able to process what was happening as it was happening. Instead, my mind went blank. I lost all sense of articulation – in both Hebrew and English – and I forgot everything I knew about what was normal or abnormal, okay or not okay, legal or illegal.

I did what I was told, trying to assume the best intentions, yet not fully processing what was being asked of me. Then, I left the room, picked up my bags and rejoined my classmates.

I was greeted by my teacher who asked me if I was okay, and that’s when I realized for the first time that I wasn’t. It took me several moments to realize that what had happened was, in fact, not okay. It was only then that I understood that the bodily invasion was not about making sure I was weaponless. No. They wanted to be certain that I was not smuggling in a Torah scroll.

The guards had violated me to make sure I wasn’t smuggling in a Torah. In Jewish-controlled Israel. In 2017.

This experience happened to me and another one of my classmates, while our fearless and powerhouse teacher tried as best she could to stop the security team’s actions. We waited together as the rest of our class trickled in, knowing very well that the last woman in our class would also be stopped. Sure enough, as she passed through the detector, the guards attempted to escort her to the room. By that time two lawyers involved with WoW and the IRAC had joined forces with us, and they, along with our teacher, were fighting back.

It took about 45 minutes, two body searches, one other attempt, and lots of harassment for all of us to get through and into the Women of the Wall Rosh Chodesh service. Sure enough, the blood-curdling screams and the high-pitched whistling from the Orthodox was there to greet us and only gained momentum as the service went on.

I have spent my life being mentored by the strongest, most caring, welcoming, accepting and intelligent Reform Jewish women and men. These mentors have shown me what it means to love my neighbor as myself, to cherish the life that I have been given and to walk proudly in the person I have become. They have taught me to embrace the religious freedom that I am blessed to have, to recognize that it is easy to take it for granted, and to use my voice when there is injustice in the world. This past Rosh Chodesh was, indeed, injustice. No person deserves to be invaded in such a way. We are all created b’tzelem Elohim, in the image of God, and should all be treated as the living embodiment of Torah that we are.

Next time Women of the Wall meets at the Kotel – for Rosh Chodesh Cheshvan – you better believe that I will be there, alongside my HUC-JIR cohort, teachers and colleagues as we wear jeans and t-shirts to protest the lifting up of skirts and shirts.

We will pray with our feet because, “Bibi, WE are Jewish too.”