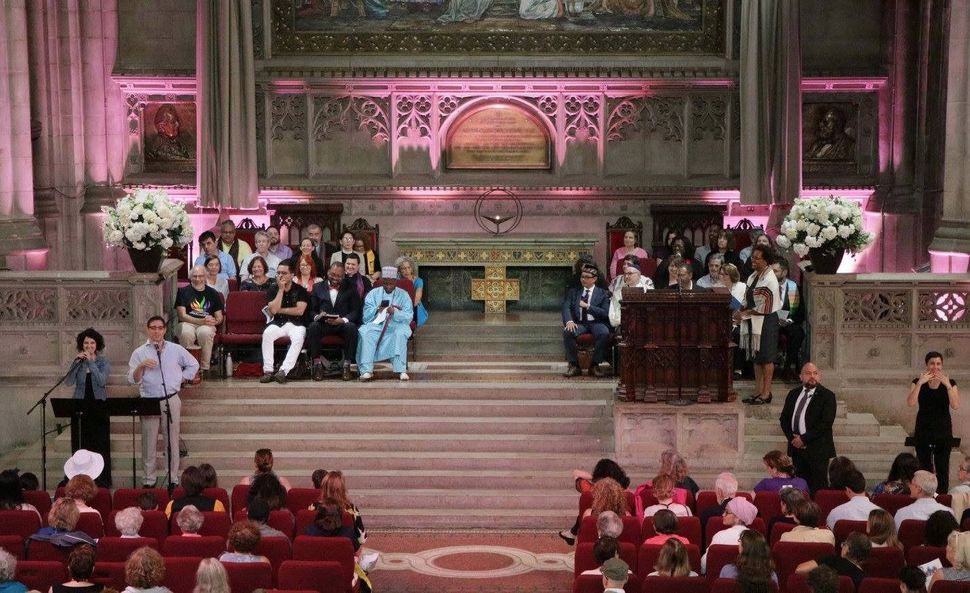 Welcome back to Jane Looking Forward! We’re now in the last week of summer vacations, with Rosh Hashanah fast approaching. If you wish to continue reading this weekly newsletter, sign up here. And spread the word!

Earlier this year, the Fourth Universalist Church, a progressive congregation on a lovely corner of Central Park West, was vandalized with swastikas and hateful words. So it was a fitting venue for a multi-faith gathering last week to respond to the white supremacist violence in Charlottesville, Virginia.

Here’s what I found inspiring:

More than 600 people crammed into the soaring church building, with another 50 listening to a live stream at the nearby Jewish Community Center. This on a warm Wednesday night in August was an impressive turnout.

The gathering was supported by 71 religious organizations, with clergy from all five New York City boroughs and beyond, many of whom had never met each other before.

There was a genuine attempt by leaders of different faiths to acknowledge each others’ stories and experiences.

Brian Ellis-Gibbs, pastor of the Queens Baptist Church, spoke with such fire, passion, poetry, musical cadence and biting commentary that I almost wanted to convert.

The focus was on rejecting hate and embracing love. I don’t think I heard Donald Trump’s name even mentioned.

Here’s what I found disappointing:

Beyond the exhortations to love and work against injustice, there was nothing specific that the gathered multitude was asked to do.

That is not a criticism of the organizers, who pulled together a powerful and diverse program in a very short period of time that was intended to be a prayer service, not a political rally. But it is symptomatic of a broader phenomenon plaguing those Americans deeply worried about the state of our society. There have been many heartfelt prayers and galvanizing protests since January 20, but to what end?

Nathan Heller, critic at large at The New Yorker, recently suggested that even with the rapid facility that technology affords us, protest may be more effective if it is done deliberately, with careful planning for maximum impact. The seminal events of the civil rights movement are a case study.

What is striking about the Montgomery, Alabama bus boycott, Heller writes, “is not so much its passion, which is easy to relate to, as its restraint, which — at this moment, especially — is not.”

I would add another point. The bus boycott and other impactful acts had a specific, desired goal; the organizers knew what long-term success would look like. Too many of the brilliantly staged public protests in the last few years — from the tents in Tel Aviv to the Occupy Wall Street encampment — lacked this concrete, strategic vision.

The sense of solidarity these moments create is a powerful first step, but the true test will be in what, if anything, comes next.

What really happened at the Kotel? The unfortunate skirmishes at the Western Wall in Jerusalem reached a new low last week, when reports surfaced that women seeking to pray there were “strip searched.”

Not content with that sketchy account, Batya Ungar-Sargon, our opinion editor, went in search of a first-person report of what actually did occur. The column by rabbinical student Jenna Mark graphically shows that the actual events were not as bad — and in many ways, worse. It’s another example of why the journalism maxim of “going to the source” is so important, and revealing.

Help for Houston. The catastrophic floods caused by Hurricane Harvey are damaging the Jewish community there in heartbreaking ways. The Forward’s continuing coverage can be found here along with suggestions about how you can help. To do our part, we are offering free digital access to all stories about the hurricane and its aftermath. Please share your experiences at [email protected].

Looking forward. The last week of summer often turns out to be much less sleepy than we expect. If you have news or a point to share, email me at [email protected].

Thanks for being such a devoted reader of Jane Looking Forward. To continue receiving my weekly newsletters, sign up here.