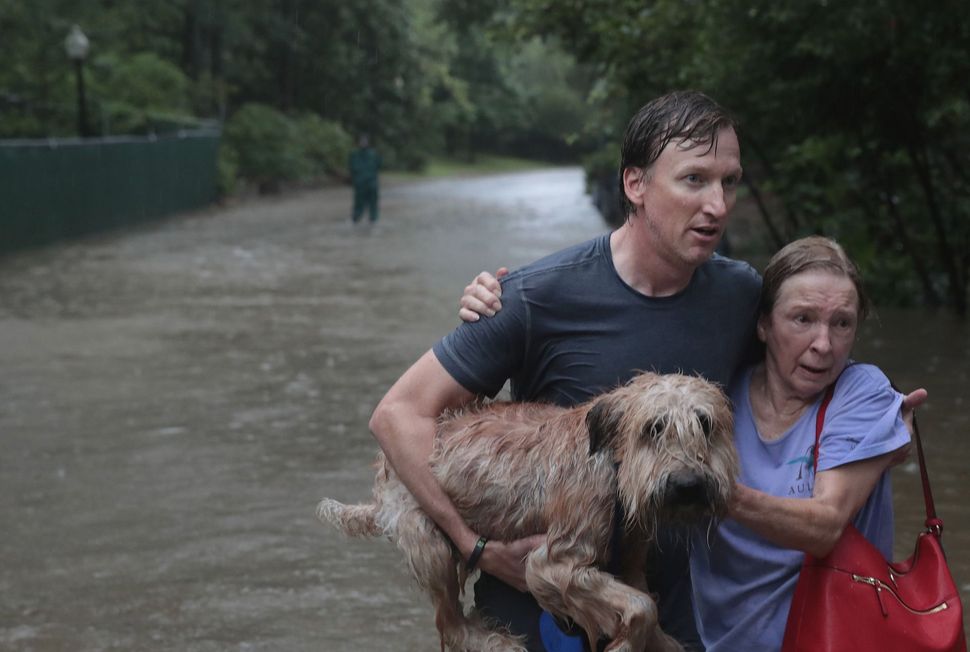 This morning I took a break from clearing my yard of the tree limbs and debris to google the name of the storm that caused the damage, along with the adjective “biblical”. The number of links that appeared—nearly seven million—rivaled the magnitude of the event. No doubt, many have nothing to do with the event that, like a cosmic 2×4, has just slammed Houston across its collective forehead. Yet others have everything to do with the event, though in unintentionally hilarious ways. A Fox News reporter, glomming onto a phony story gone viral about sharks swimming along submerged streets, blurted that “some really weird biblical things” were transpiring in Houston.

For most of the links, of course, “the biblical thing” has to do with the Flood narrative in Genesis. Local and national newspapers and news stations inevitably cast the rains and floods in scriptural terms, as did representatives of Houston’s religious communities, Jewish as well as Christian. “The level of rain that we’re seeing here is Biblical,” declared David Krohn, the cantor at Temple Brith Shalom. “It’s diluvian rain all day and all night.” Like Krohn, and countless others, the same adjectives—and the associations they conjure of Noah—have spilled into my own conversations and thoughts. How could they not? Even for those, like myself, who first think of Steve Carrell or Russell Crowe when they hear Noah’s name, the Flood story inevitably frames our efforts to make sense of catastrophes.

How useful, though, is the biblical frame? Is it made of nothing more than empty clichés? Or, instead, does the frame, at least from certain angles, capture the nature of what has just happened in this part of the world?

Since Friday, it has certainly felt like “all the springs of the great deep burst forth, and the floodgates of the heavens were opened.” While the rain did not fall on this particular patch of earth forty days and forty nights, it certainly felt like it. Nearly everyone I have spoken to feels, like me, the hemorrhaging of our sense of time. With days nearly as dark as the nights, with torrents of water cascading without stop from the sky, with the capsizing and collapse of our daily schedules, we were no longer sure what time or day it was. And though it will not take 150 days for the flood waters to recede, many Houstonians will not be able to return to their homes for several weeks. (My family and I were insanely lucky; the waters from the neighborhood bayou crept within two blocks of our house, but no further.)

But the physical nature of the cataclysm—the “blotting out” of our world—is just one possible frame. There is also a moral frame. Noah’s task, we are told, was to gather seven pairs of every animal to load onto the ark. When my wife and I began to see, on Saturday, why this storm was not like other storms, Noah’s task seemed like child’s play. Saving two of everything is easy compared to saving one of everything. One’s spouse, one’s child, of course. But also the “ones”—the irreplaceable objects—that furnish our lives. What do we take with us, we wondered. And what must we leave behind? Ultimately, we were lucky enough not to confront this triage of memories. Tens, if not hundreds of thousands however, have not been as lucky. The seven and more pairs of things emergency services are supplying—from cots to clothing—are vital. But they can never replace the “ones” now sunken below the brown waters of our unbound bayous.

But Noah’s experience and our own do share one critical resemblance. In a brilliant exegesis, Avivah Gottlieb Zornberg reveals the essence of Noah’s experience once he enters the ark. Speechless when he was building and loading the ark according to God’s blueprint, Noah is transformed by his time at sea. The ark, writes Zornberg, is nothing more or less than “a laboratory of kindness, of attentiveness to the needs and the enjoyment of others.” Once again settling on dry ground, Noah not only sees a new world, but has become a new man.

Unlike Noah, Houstonians will not see “a new world” when the waters recede. And few of us will have become new men or women. Instead, Houstonians will see their with old eyes their old world, savaged by Harvey. But they will have also seen, alongside the horrors brought by Harvey, countless acts of kindness and attentiveness from others. They are different kinds of “ones” from those they lost, of course, but perhaps no less essential as they begin to rebuild their world.