The Left-Wing Threat To Liberalism 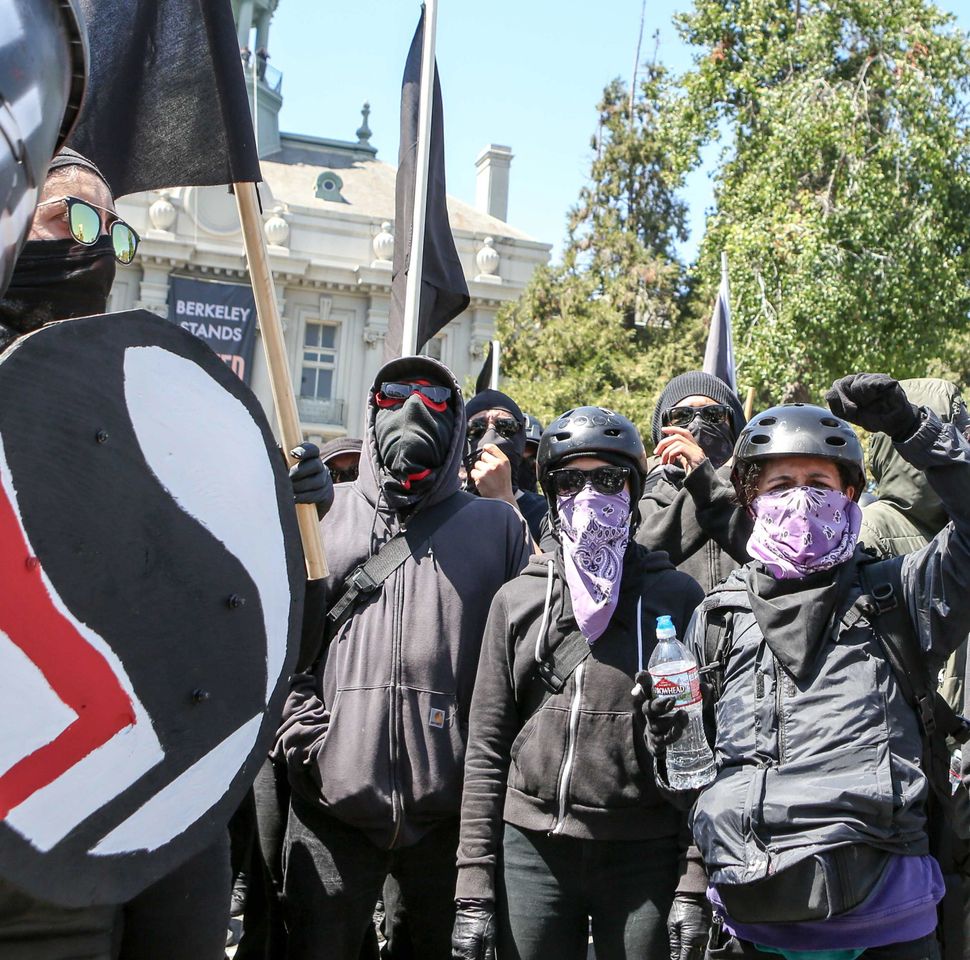 Liberalism, in its classic sense of a free society based on individual rights, intellectual pluralism, and democratic government, is in peril—as numerousvoices havewarned over the past two years. The common assumption is that the illiberal tide comes from the right: the xenophobic populism, nationalism, and authoritarianism represented by Donald Trump in the United States and figures like French National Front leader Marine Le Pen and Hungarian prime minister Viktor Orbán in Europe. Recent events in Charlottesville, where a far-right rally featured Nazi flags and anti-Semitic chants, were a stark illustration of this resurgence of reactionary forces — all the more alarming since, under Trump, the so-called alt-right has friends in high places.

There is no question that the new right poses a grave threat to liberal ideals, both culturally and politically. But let’s not forget that a present threat to a functioning liberal society also comes from another corner: what critics such as The Atlantic’s David Frum have called “the illiberal left.”

To be sure, advocates for social justice cannot be compared to blatantly repellent neo-Nazis. But even aside from the violent fringe of the “antifa” movement, noble concerns with equality and respect can turn into an authoritarianism that diminishes personal liberties and pluralism in a very real way — particularly when it enjoys mainstream acceptance in a way right-wing extremism cannot.

Consider that the reactions to Charlottesville included a flurry of arguments from the left urging liberals to “rethink” their defense of free speech even for the most odious. While those proposals did not explicitly support watering down the First Amendment, they did call for curtailing or abandoning advocacy for freedom of “hateful speech” that makes vulnerable groups less safe.

But while critics of “free speech absolutism” were mainly talking about white supremacists and neo-Nazis, the illiberal left’s concept of harmful speech is much broader. One controversy in particular illustrates the point. Rebecca Tuvel, an a ssistant professor of philosophy at Rhodes College in Memphis, wrote an essay in the feminist philosophy journal Hypatia comparing transgender identity and “transracialism” — the adoption of a different racial identity than the one you were born with. The essay ended up being one of numerous recent academic battles pitting free speech versus political orthodoxy. For the crime of simply asking whether a transracial identity might be comparable to transgendered one, Tuvel was accused of “enact[ing] violence” toward transgender people. This violence included among other things using the terms “male genitalia” and “biological sex” and mentioning the pre-transition name of Caitlyn Jenner.

The backlash was enormous and went beyond criticism or debate. Tuvel’s detractors wanted the article withdrawn and steps taken to ensure that such viewpoints were not published again (in the end, Jenner’s birth name was removed, but the piece was not taken down).

In other cases, attacks on “offensive” speech and ideas in the progressive academy have gone as far as physical aggression or intimidation. Consider the widely reported harassment a few months ago of Bret Weinstein, a biology professor at Evergreen State College in Olympia, Washington and a political progressive. Weinstein had angered social justice activists by criticizing an anti-racism event in which white students and faculty were asked to attend off-campus meetings (there is disagreement about whether all white people were told to stay off campus) and objecting to a proposed requirement of an “equity justification” for all new faculty hires. About fifty students invaded and disrupted his class, shouting him down when he tried to engage them in discussion. Later, Weinstein had to hold his class in a park after campus police told him they could not guarantee his safety.

Or consider campus protests expressly intended to silence offensive right-of-center speakers—not only provocateurs such as Milo Yiannopoulos or Ann Coulter, but respected if controversial conservative authors such as Heather MacDonald, who disputes claims of widespread police racism. At Vermont’s Middlebury College in March, the effort to shut down an appearance by Charles Murray (who has written about the genetic basis of intelligence and believes there are probably innate racial disparities in IQ, though his talk at Middlebury was unrelated to those issues) turned violent, resulting in physical injury to a female professor escorting Murray.

A number of liberals have voiced alarm about the authoritarian, worry about “students signing petitions or people being mean to racists on Facebook” when we have Nazis on the march, an administration hostile to civil rights, and a President who calls the free press “enemies of the people”?

But illiberal leftism goes far beyond petition-signing and racist-shaming on social media. And there is no reason one cannot worry about authoritarianism on both the left and the right, especially since the two feed off each other.

Even if the excesses of “PC culture” were limited to college campuses, this would be a problem, given how central the free exchange of ideas is to the purpose of the university. Feminist lawyer and author Wendy Kaminer warns that “soft authoritarianism” on campus has consequences outside, “teaching future generations of leaders the ‘virtues’ of autocracy.”

But it’s not limited to college campuses. Left-wing illiberalism already has real power in the real world, through public opinion and activism—online and offline—and even through law and policy, when offensive speech is reclassified as “harassment.”

The casualties include yoga classes, museum programs, and burrito shops terminated on charges of “cultural appropriation.” And they include uninhibited discourse in the media, where retaliation for heresy can have very tangible consequences.

Thus, last year, California journalist and popular music critic Art Tavana lost his column in the LA Weekly—and, he told me, was dropped by several major magazines—after his essay discussing singer Sky Ferreira as an example of the role of sex appeal in pop music sparked an outrage-fest on dozens of websites. (Tavana’s supposedly “sexist” and “misogynist” piece praised Ferreira for many nonsexual qualities and repeatedly noted that sexuality is just as vital a part of the appeal of male pop stars.)

The European liberalism often held up as a contrast to Trump-style right-wing populism has its illiberal side as well. Hate speech laws have been used to chill debate on various issues, including criticism of Islam. French courts recently upheld a ban on the television airing of a short film showing happy Down’s Syndrome children and urging women not to terminate pregnancies after such a diagnosis—on the grounds that it could “disturb” women who had had abortions.

Of course, even in a liberal culture, some ideas are rightly considered beyond the pale even if it is legal to express them—be it Holocaust denial, defense of slavery, or advocacy of wife-beating. Few would regret the passing of a time when one could casually use racist, ethnic, or sexist slurs without incurring severe opprobrium. There is always a consensus on what cannot be said in decent society—though the specifics of that consensus change.

What a liberal society requires is that such exceptions to intellectual tolerance and pluralism be drawn very narrowly. Is it possible that the opinion whose place in mainstream discourse we defend today will be banished to the odious fringe tomorrow, much like the defense of slavery or wife-beating? It is; but none of us can predict the moral consensus of the future. Perhaps it’s not a conservative opinion (for instance, that gender is a matter of biology rather than self-defined identity) but a progressive one (for instance, abortion rights advocacy) that will someday be seen as the equivalent of support for slavery. Behind that veil of ignorance, it is best to err on the side of intellectual freedom.

Under the illiberal left regime, the exceptions keep expanding until they become the rule: any grievance can further narrow the boundaries of acceptable speech or thought. This is especially alarming given the ability of giant Internet companies, which fly the banner of cultural progressivism, to deplatform undesirable speech—a practice whose potential for de facto censorship is worrying even to many on the left.

This expansion of the unutterable stems from the fact that left-wing authoritarianism is not just an excess of zeal but the expression of a world-view. It is an ideology that treats individuals solely as a product of their racial, ethnic, sexual and other identities; treats “privilege” as original sin; and seeks to eradicate anything that may be perceived as oppressive to the “marginalized”—a utopian project that inherently requires speech- and thought-policing. (Ironically, Jews are a suspect category for progressive “identitarians” just as they are for reactionary ones: since Jews in Western societies are viewed as “privileged,” the anti-racist rhetoric of the left often erases anti-Semitism.)

Identitarian leftism is openly and proudly illiberal. It reviles the murdered cartoonists of Charlie Hebdo for offending Muslims’ sensibilities. It defends calls for the destruction of a painting decried as “appropriation” because its subject is a black lynching victim and the artist is white.

Illiberal leftism also derides liberalism itself as a “philosophy of rich white male domination,” pillorying Enlightenment philosophers and free speech proponents for their racist, sexist, or imperialist views. Such attacks miss an essential fact: The liberal philosophers of the past may have shared many prejudices of their time, but they created the doctrine of universal human rights that has allowed us to transcend these prejudices.

Defending the liberal order from right-wing attacks is not made easier when progressives try to discredit its foundational values as a tool of the privileged—or when liberal society itself becomes less free because of pressures from the cultural left.

Those who fear the rise of anti-liberalism today often look to the 1930s for ominous parallels. In those dark times, liberal democracy’s enemies came from both the right and the left. We should heed that lesson.

Cathy Young is a contributing editor at Reason magazine and is the author of “Growing Up in Moscow: Memories of a Soviet Girlhood”. Follow her on Twitter, @CathyYoung63

Correction: An earlier version of this story mistakenly stated that Rebecca Tuvel’s story was taken down by Hypatia.

The Left-Wing Threat To Liberalism