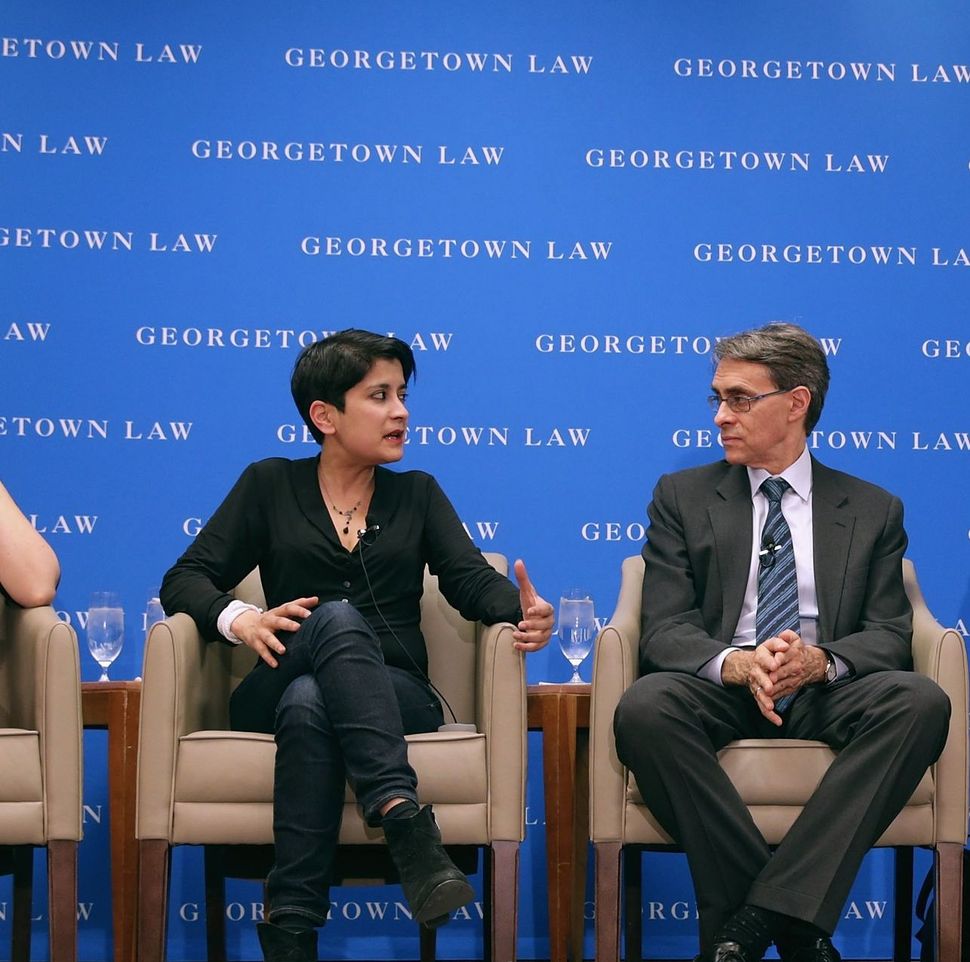 A few weeks ago, Kenneth Roth, the executive director of Human Rights Watch (HRW), tweeted about Israel. “Many rights activists condemn Israeli abuse & anti-Semitism,” wrote Roth. “Some white supremacists embrace Israel & anti-Semitism.” The tweet then included a link to an article boasting an image of Israeli and Confederate flags on the same flagpole. The article, “Birds of a Feather” by Nada Elia, equates Zionism to white supremacy, referencing Richard Spencer’s claim that both movements rely upon the “exclusion” of others.

It’s a weak argument at best. Far from a white supremacist haven, Israel’s population is 25 percent non-Jewish, including 20 percent Arab non-Jews who have equal rights to the Jewish majority. Citizens of all races live in Israel, which flies in individuals from other countries and continents with the explicit intent of absorbing them into Israeli society. The country has offered, or accepted, peace and sharing of the land with the local Arabs multiple times, before and after 1948 – all offers rejected, some with violence – and has permitted over 130,000 Palestinians to officially move into Israel from the territories under family reunification rules between 1967 and 2004. Arab non-Jews sit in non-Arab as well as Arab parties in the Knesset; they serve as justices, IDF officers, and ambassadors.

In other words, Israel is far removed from white supremacy and the movement’s bigoted exclusions. The article’s other points, claiming “similarities between fascism and Zionism” and that “Israel is a by the Anti-Defamation League’s Jonathan Greenblatt, the tweet went unchallenged.

But those of us who have followed Roth and Human Rights Watch throughout these past years are not surprised. His animus towards Israel and its supporters is expressed regularly and assertively. Indeed, this tweet is not an anomaly. It is rather of a piece with Roth’s leadership of HRW. For the past two decades, Roth has used his organization to support Israel’s opponents. Consider his defense of Hamas’s tunnels:

While this may be an issue that professors of international law should debate, even those with serious qualms about some of Israel’s actions must agree that tweeting legal advice to terror organizations is not an act befitting the leader of a human rights organization. Such a tweet has the power to instill suspicion in the hearts of the populations terrorized by Hamas — both Palestinian and Israeli — that Roth might address their human rights with the same absence of care.

But the tweet defending Hamas was not only an unneeded demonstration of support for the terrorists who hold Gazans under their thumb and that have in the past regularly attacked Israeli civilians. Rather, it compromised HRW as a watchdog group that has written and will again write reports on the conflict between the Palestinians and Israel.

Those reports are the product of Roth’s Middle East/North Africa (MENA) team, a group headed by MENA division leader, Sarah Leah Whitson. Whitson is a former professional anti-Israel activist and admirer of notorious Israel detractor Norman Finkelstein (“I agree w/ u that norm undermines himself and his cause w/ the language he uses, and his anger sometimes gets the better of him and his brilliant mind and generous spirit,” she wrote of Finkelstein. “I continue to have tremendous respect and admiration for him, because as you probably know, making Israeli abuses the focus of one’s life work is a thankless but courageous task that may well end up leaving all of us quite bitter.”). She is an unapologetic critic of Israel who, in the period when she was boasting about HRW’s impact on the notorious Goldstone Report, alsocommended Muamar Gaddafi’s son for bringing a “spring” to Libya.

Whitson was also instrumental in clearing HRW of some of its more nuanced leaders. One of these was Edith Everett, whose foundation has supported the left-leaning New Israel Fund. In a telling episode reported on by the New Republic, Everett tried to get a researcher to admit that Palestinian militants in Gaza use human shields. “He was beginning to respond to that when Sarah Leah Whitson wouldn’t let him speak,” writes Ben Birnbaum. “She just put an end to that conversation. She said, ‘Well, in summation, I think we have to move on.’” Everett immediately resigned from HRW.

Whitson is joined on the MENA team by her deputy, Joe Stork, who created an Israel-hostile information house, MERIP, because he and his co-founders deemed existing left-wing criticism of Israel to be inadequate, and by Israel/Palestine Country Director Omar Shakir, a well-known Israel-boycott activist who served as an attorney for Steven Salaita, the academic scholar whose rabid anti-Zionist tweets made him famous.

In other words, Roth’s MENA team is like a team of chocolate chip aficionados sent to investigate a cookie factory.

And the team’s actions have been much as you would expect from these proclivities. A key activity of HRW are its investigative reports on human rights violations. These are often used by international bodies such as the United Nations and the European Union to develop policy, and relied upon by most media outlets as a legitimate and trustworthy source of information. The extent to which HRW under Roth has focused on Israel is shocking – a visit to their website reveals that since 1993, HRW has publicized a vastly disproportionate number of reports about Israel. To get a sense of this disproportion, consider that HRW has published 32 reports condemning the theocratic, repressive Iran, which averages 400–600 annual murders of its prisoners. In the same timeframe, it has published 58 reports about democratic Israel, which does not kill any of its prisoners. Repressive China, with a population 150 times Israel’s, has merited 73 reports.

The report totals tell a revealing story about a hyper-focus on Israel. But they pale in comparison with one of the biggest moral stains of Roth’s HRW leadership — the time he sent a delegation to Saudi Arabia, not to gather evidence but to fundraise for human rights. Worse still, it emerged that Roth’s team, led by Whitson, sought to raise funds from the prospective Saudi donors by promoting HRW reports critical of Israel.

This isn’t something Roth admitted freely, but journalist Jeffrey Goldberg got an admission after multiple attempts, finally, asking Roth point blank, “[D]id your staff person attempt to raise funds in Saudi Arabia by advertising your organization’s opposition to the pro-Israel lobby?” Roth admitted: “That’s certainly part of the story. We report on Israel. Its supporters fight back with lies and deception. It wasn’t a pitch against the Israel lobby per se. Our standard spiel is to describe our work in the region. Telling the Israel story — part of that pitch — is in part telling about the lies and obfuscation that are inevitably thrown our way.” In other words, yes. As Goldberg put it, “The director of Human Rights Watch’s Middle East division is attempting to raise funds from Saudis… in part by highlighting her organization’s investigations of Israel.”

Then there was the NGO Forum at the World Conference against Racism in Durban, South Africa, in 2001, an event so flagrantly focused on Israel that the United States and Israel ultimately boycotted it. Over 3000 nongovernmental organizations participated in the NGO Forum, which descended into open anti-Semitism in response to a flier that had been distributed. As Rep/ Tom Lantos, a Holocaust survivor in attendance, reported, “For me, having experienced the horrors of the Holocaust first hand, this was the most sickening and unabashed display of hate for Jews I had seen since the Nazi period.”

But HRW was there. Eight years into Roth’s tenure as executive director, HRW participated and signed off on the Forum’s final declaration, which, as the Wiesenthal Center notes, was a “blueprint for sustained assault on Israel.” In fact, it was both the blueprint and launching pad for the modern iteration of the boycott movement against Israel, otherwise known as BDS.

There is room for legitimate criticism of Israel as there is with any country or society, and certainly those embroiled in conflict. However, when an organization such as HRW becomes complicit in sustained and unjustified attacks on Israel originating in and fomented by countries such as Iran, Syria and Egypt, it makes a mockery of justice and fairness and undermines human rights. This was pointed out by Robert Bernstein, HRW’s legendary founder, when he announced in 2009 that he was leaving the organization he created because of his disappointment with its overbearing focus on Israel, its paucity of coverage of closed and dark societies around the world, and its continued equation of those societies’ human rights violations with those of democratic and free countries.

It is horrifying to think that the media, with limited bandwidth and knowledge, rely regularly upon guide organizations such as HRW to point them toward important human rights stories.

The U.N., E.U. and other bodies also use HRW reports as credible guideposts on debate and even policy. By emphasizing and promoting “juicy” Israel stories and reports for nearly two decades now instead of grave human rights offenders in closed societies, HRW has almost certainly significantly undermined Israel’s reputation. And that may be the minor crime here. The major crime is that in doing so, HRW has diverted attention from severe human rights violations around the globe and their victims who truly need help and a voice to speak out for them.