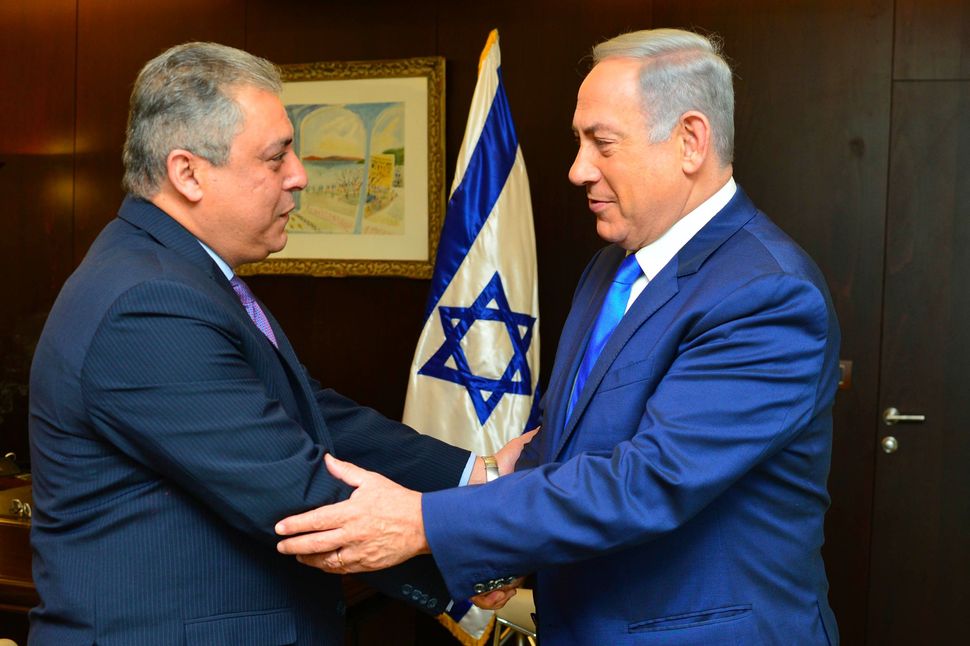 “What is actually happening with [the Arab states] has never happened in our history,” Prime Minister Benjamin Netanyahu said at an Israel Foreign Ministry Rosh Hashanah toast September 6. Netanyahu, who is also Israel’s foreign minister, called this a “breakthrough.”

He may have a point. Yet the picture is not nearly as straightforward, nor as historic, as Netanyahu presents it. Here, the 2017 Middle East context is everything.

Regional chaos and the dual Islamist threat posed to both Israel and its Sunni Arab neighbors by Shiite Iran and Sunni Islamic State have undoubtedly boosted Israel’s regional attractiveness as a stable security and even commercial partner. Netanyahu can definitely take credit for improving Arab ties, albeit largely clandestinely.

On the other hand, the Palestinian issue under Netanyahu’s leadership is going nowhere. Arab public opinion is fully aware of the impasse. Accordingly, Arab leaders, who since the outbreak of Arab revolutions in 2011 realize they must cater to their “street” if they hope to survive, are wary of going public with their Israeli ties, or normalizing them.

Two comparisons to recent Israel-Arab dynamics are instructive. First, during the early 1990s Israeli-Palestinian relations appeared to many in the region to be heading toward Oslo-based solutions. Accordingly, a number of Arab countries—Morocco, Tunisia, Oman, Qatar — agreed to overt, low-level diplomatic relations that featured Arab legations in Tel Aviv and Israeli diplomats in the Arab capitals. These were open, not clandestine relationships. Mauritania even exchanged ambassadors with Israel.

All this melted away — to a great extent on Netanyahu’s watch — in the late 1990s, as the perception of an Oslo-based peace disappeared. Nothing like these overt relationships exists today, Netanyahu’s triumphalism notwithstanding.

Second, Israel still has full diplomatic relations with Egypt and Jordan, its immediate neighbors. But at the public level, those ties have known better days, and here again Netanyahu’s failure to advance a Palestinian solution has made a negative contribution. Thanks to the recent badly mismanaged Temple Mount crisis, Israel currently has no diplomats at all in Amman. Its embassy in Egypt was re-staffed only recently, after an eight-month closure generated by unmanageable security concerns. In other words, at the level of normal diplomacy, Israel’s two “full” diplomatic relationships in the Arab world are actually in worse shape than they were in the past.

But in today’s Middle East, the issue of Israel’s bilateral ties with Arab countries is more complicated than mere tallies of embassies and diplomats. That is the new reality that Netanyahu apparently aspires to take credit for when he tells Israel’s diplomats in Jerusalem that “there is much more [in Israel-Arab ties] than during any other period in the history of Israel.”

The picture that emerges is one of strategic, intelligence and high-tech ties of reportedly unprecedented proportions, particularly with the Arab monarchies of the Persian Gulf but with Egypt and Jordan as well. Everything is invisible — clandestine or acknowledged with a wink and an innuendo.

Israel’s new and old Arab friends are not interested in embarrassing diplomatic ties that pit their regimes against their pro-Palestinian street. Yet they are prepared to ignore the Palestinian impasse because the fight against Iran and Islamic State, where they need Israel, is far more crucial and existential. Besides, as many Arab diplomats and strategists are finally beginning to acknowledge, the Palestinians are to blame too: they have made a hash of their statehood aspirations.

But where is this going? Will we look back in ten years and see history in the making, or rather recall yet another brief interlude of Arab-Israel progress followed by a setback and darker times?

Back in the heady days of Oslo, the sense was that ongoing Israeli-Palestinian progress—a positive factor—would open up more and more of the Arab world to Israel. Today, everything depends on the negative factor, the dual Iranian and Islamic State threats. If and as Islamic State is defeated and decimated, the Arab regimes it has targeted will feel less need to rely on Israel’s security prowess. By the same token, were the Saudis, the United Arab Emirates and the other Gulf principalities to mend relations with Tehran tomorrow, they would probably downgrade their quiet ties with Israel.

Still, the threat generated by Iran’s drive for Middle East dominance is not likely to dissipate anytime soon. Even Sunni jihadist extremism will be with us for the foreseeable future. These factors award Israel’s budding clandestine relationships with the Sunni Arabs some staying power for at least a few years. Indeed, they go a long way toward explaining Israel’s expanding ties under Netanyahu even further afield, with the likes of India, China and Russia (on Sept. 10 the PM was on his way to an unprecedented tour of Latin America).

Netanyahu, then, has leveraged Middle East chaos astutely to Israel’s strategic advantage. This is an important contribution to Israel’s overall security. But it is a temporary advantage, bereft of deep roots in any shared vision of Israel’s future. Israel’s Arab friends are all dictators whose lease on power could ultimately go the way of the Shah of Iran, an earlier semi-clandestine ally who was swept away by extremist Islam in 1979.

Nor are these Arab neighbors blind to the fact that the same Netanyahu is presiding over the dissolution of the two-state solution. He is engineering Israel’s slow slide down a slippery slope toward a complicated and conflicted one-state reality that will critically weaken its legitimacy. As matters stand, history will probably find far more fault with Netanyahu’s Palestinian policies than benefits to his regional strategy.

Yossi Alpher is the author of “Periphery: Israel’s Search for Middle East Allies.” He is a former Mossad official and former director of the Jaffee Center for Strategic Studies at Tel Aviv University.