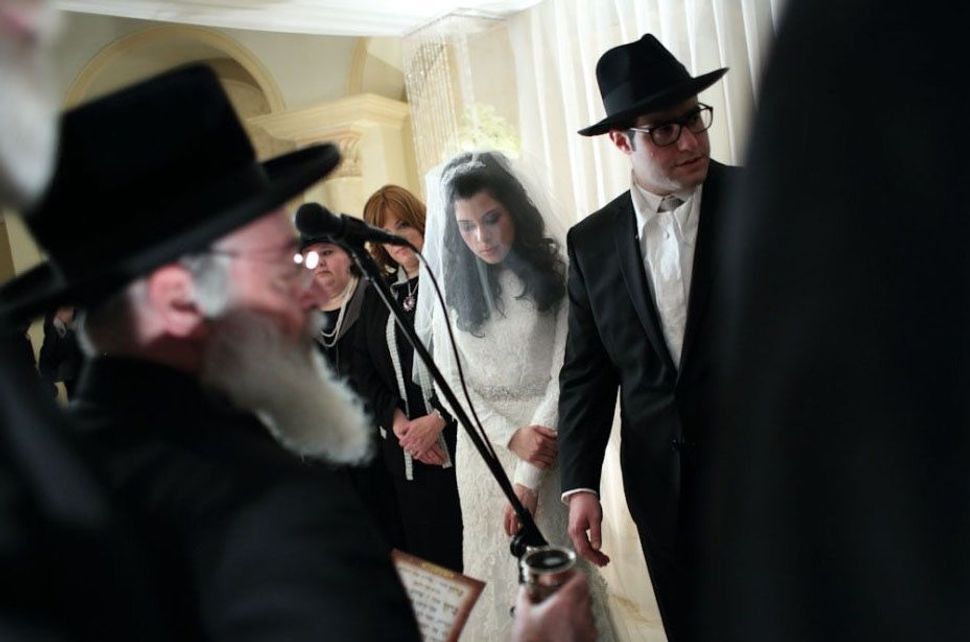 A recent article in these pages by sociologist Steven Cohen and others concluded, based on the Pew Research Center’s findings, that in 40 years, far fewer American Jews will identify as Conservative and Reform, and far more will identify as Orthodox.

Here, every day, continuity is on our minds.

After all, there is a certain natural arc in the success stories we tell — so-and-so survived persecution, came here, built themselves up, had many children, had many more grandchildren, now comes to family weddings surrounded by progeny. “A slap in Hitler’s face!” the elderly tell each other, smiling.

And there’s a very conscious reason, after all, that marriage is talked about as early as high school in the Orthodox community. My more secular relatives and friends scoffed at the indoctrinating socialization I told them about, the way we high school girls put on musicals re-enacting wedding scenes (this was no “High School Musical”); admired engagement rings; doodled children’s names in our notebook margins; the way we talked about the prospect of shidduchim, of dating, with a certain whisper and aura. It creates pressure, perhaps, but it also creates a certain focus. And while the focus on marriage has some unfortunate downsides — I wrote about them here and here – men are just as focused on finding the perfect mate as women are.

Continuity was made a clear priority for this Orthodox Jewish 19-year-old and her friends, just as it was for my husband and his friends. There was little time for leisurely “self-exploration”; the weight of adulthood, of finding a career, a partner, and starting a family, appears 10 years earlier in the religious community than in the secular world. Life is short, and there’s no time to waste.

This is a community that is committed to marriage, to family and to immersive Jewish education. And we have been often derided by our liberal peers for our insularity and for our conservative values: for making conversion such a rigorous process, for the culture of obsessing over marriage and children, for the (at times, prohibitive) expense of Jewish day school tuition.

Sure, there are challenges that arise because of these core values — the bureaucratization of conversion, the pressures on singles to marry and sometimes compromise, the challenge of facing infertility in a world where children are everything, the pursuit of affordability ever elusive as parents break their backs to give their children a Torah education above all.

But at the end of the day, it is these very values, with all the accompanying sacrifices, that keep Orthodoxy afloat in the modern world. And yes, the numbers show it.

Indeed, Cohen et al. recognize this in their conclusion. “The data clearly show how non-marriage, intermarriage, and low birthrates have taken their toll on Conservative and Reform population numbers,” they write. “If the Conservative and Reform movements are to arrest their declines, it means helping younger Conservative and Reform Jews find partners to marry and supporting their decisions to have children. It means encouraging more non-Jewish spouses and partners to convert to Judaism. All of these worthy goals can be furthered by more participation in Jewish day schools, summer camps, youth groups, trips to Israel, Hillel, Chabad on campus and other ways of connecting adolescent and young adult Jews to one another. And, let‘s not forget that parents, grandparents, and rabbis all shape the Jewish lives of children, teenagers and young adults.”

In other words, if the Conservative and Reform movements are going to have the success of the Orthodox, they need to, well, behave more Orthodox.

You have to admire the irony of bemoaning the rise of the Orthodox while at the same time encouraging liberal denominations to follow the Orthodox demographic trends.

But it’s a fool’s errand. Our methodology for continuity is rooted in the very values that, sadly, many liberal Jews reject — our insularity, our commitment to the collective over the individual, our obligation to a divine value system. Having a few more kids, sending them to sing Shabbat songs once a week for two months out of the year, and then on a Birthright trip a few years later isn’t going to change anything. To me, that’s a band-aid on a bullet wound.

If the Orthodox experience has taught us anything, it is that complete immersion succeeds. Like the immersion in the mikveh, in which every centimeter of the body must touch water, so, too, our commitment requires totality. It is an immersion in our books; immersion in prayer services as punctuation marks for time; immersion in a 25-hour Shabbat experience without smart phones and the internet; immersion in round-the-clock Jewish education, at all costs.

Our commitment to religious values, as much as it is all-consuming, as much as it may jar with secularism, is what keeps us thriving. As the secular Zionist Ahad Ha-Am wrote, “More than the Jewish People have kept the Sabbath, the Sabbath has kept the Jews.” Perhaps it is not just the Sabbath, but all of our laws and social commitments which keep us from fading into a larger human tapestry, by maintaining a strong sense of identity that always comes first.

One can’t have the numbers of the Orthodox without the values — the two go hand in hand.

The strength of the Orthodox community is not rooted in a mere birth rate unsupported by certain principles. Our very demography is rooted in values that run deeply, and which source and sustain our numbers, in the culture of Jewish literacy and in the very texts we construct our lives around, in the way we constantly engage with centuries of Jewish conversation in our study halls and synagogues. It is even in our absolute refusal to touch a light switch on Shabbat, the way we let Judaism define every molecule of our very being — this is where the key to continuity may lie.

Until one values that all-consuming lifestyle — a lifestyle not defined by only tikkun olam and interfaith dialogue — one shouldn’t expect a demographic shift any time soon.