Why We Are Joining President Trump’s Rosh Hashanah Call 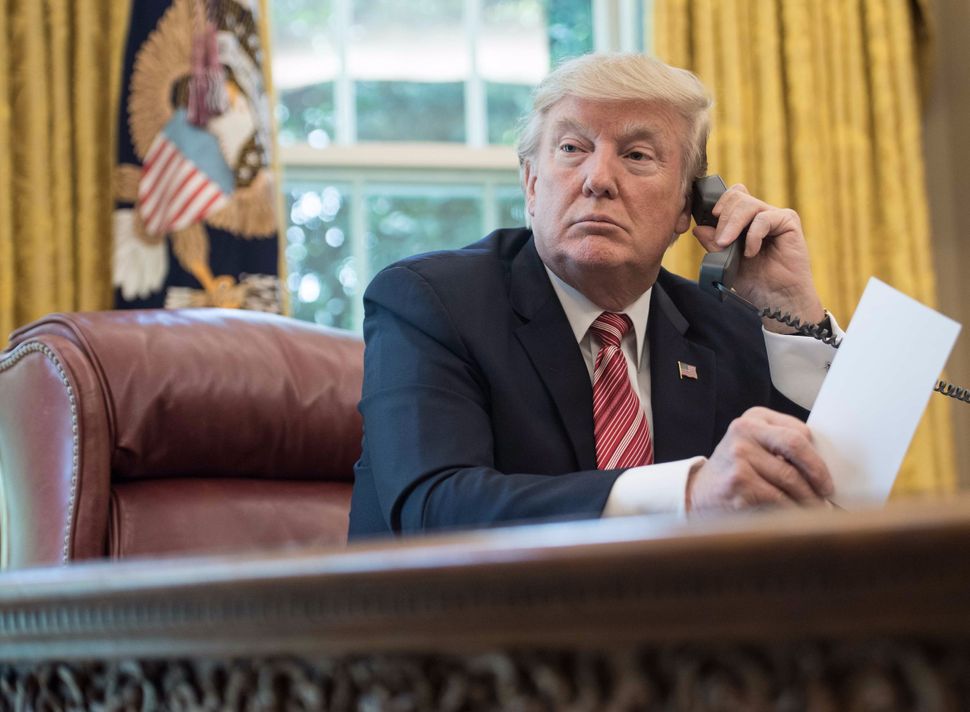 It’s hardly a secret that there isn’t exactly a broad consensus within the Jewish community about President Trump (or for that matter, sadly, much else).

Criticism of Mr. Trump for his string of public remarks last month about the violence in Charlottesville came from both liberal and some conservative media, even from some lawmakers in his own party. An Orthodox rabbinical group, the Rabbinical Council of America, and, separately, representatives of Agudath Israel (I among them) also took issue with the president’s comments, which seemed to equate the “two sides” in the Virginia clashes.

Non-Orthodox religious groups, though, went a step – actually many miles – further. The (Reform) Central Conference of American Rabbis, the (Conservative) Rabbinical Assembly, the Reconstructionist Rabbinical Association and the Religious Action Center of Reform Judaism proclaimed to whatever media they could muster that, unlike during past administrations, when sitting presidents would speak by phone with hundreds of Jewish clergy before Rosh Hashana, they would refuse this year to organize, as they have done in the past, a presidential holiday message.

They also denounced the president in unusually harsh language, accusing him of having given “succor to those who advocate anti-Semitism, racism and xenophobia” by his Charlottesville comments. And they went on to call Mr. Trump’s statements “so lacking in moral leadership and empathy for the victims of racial and religious hatred that we cannot organize such a call this year.”

There is a difference between respectfully asking a president to clarify that he does not equate proponents of white supremacism with protesters against the same, and, however one might feel about him, publicly and starkly insulting our nation’s duly elected national leader.

What is more, and even more pertinent here, is the fact that the Jewish religious tradition is very clear on the matter of showing honor to governmental leaders – even those with overactive Twitter feeds.

The Mishna (Avot 3:2) teaches that governments are what prevent people from acting on their worst instincts, and thus deserve our prayers. Some synagogues include a formal prayer for governmental leaders. Even those that don’t, though, if they are faithful to Jewish tradition, still subscribe to the concept embodied by such supplications.

One hopes that even those Jewish religious representatives who are most outraged by Mr. Trump for any of a number of his statements, positions or actions they find odious, rightly or wrongly, surely would not equate him with the Pharaoh of the Exodus, who ordered the murder of Jewish babies and enslaved our ancestors.

And yet, the Talmudic sage Rabbi Yanai (Zevachim 102a) asserts that reverence for a king is always proper, citing how Moses, even while informing Pharaoh that the Jewish People will come to leave Egypt with his encouragement, took pains to craft his words with respect (see Rashi on Exodus 11:8).

For another example, our forefather Jacob bowed to his own son Joseph because of the latter’s position as a governmental authority (see Rashi on Genesis 47:31).

And so, Jewish tradition, following the implications of those teachings, has always counseled honor for governmental leaders, from kings, to czars to presidents. There may be times when issue will need to be taken with a leader, even times when protest is rightly registered. But never times when public insult or invective, like that which was offered by the aforementioned groups, is Jewishly proper.

I doubt that the president is losing any sleep over the fact that he won’t be exchanging pleasantries with representatives of those groups. It doesn’t seem like the type of interaction he would particularly relish. And, in any event, he has invited a number of other rabbis to participate in a pre-Rosh Hashana call Friday morning. Agudath Israel representatives have accepted that invitation.

Sleep, though, might rightly be lost by the insulters of the president. What should keep them awake is the fact that they acted in a decidedly un-Jewish way, at least if the Jewish religious tradition is the gauge.

It would be wonderful if those leaders would take the time that they would have otherwise invested in organizing, publicizing and participating in a presidential conference call to reflect deeply on more meaningful thoughts of the season, like all Jews’ holy responsibility to recognize the eternal nature of our religious tradition, and to resolve to, in the future, act in accordance with its prescriptions for the Jewish people.

Avi Shafran is director of public affairs for Agudath Israel of America.

Why We Are Joining President Trump’s Rosh Hashanah Call