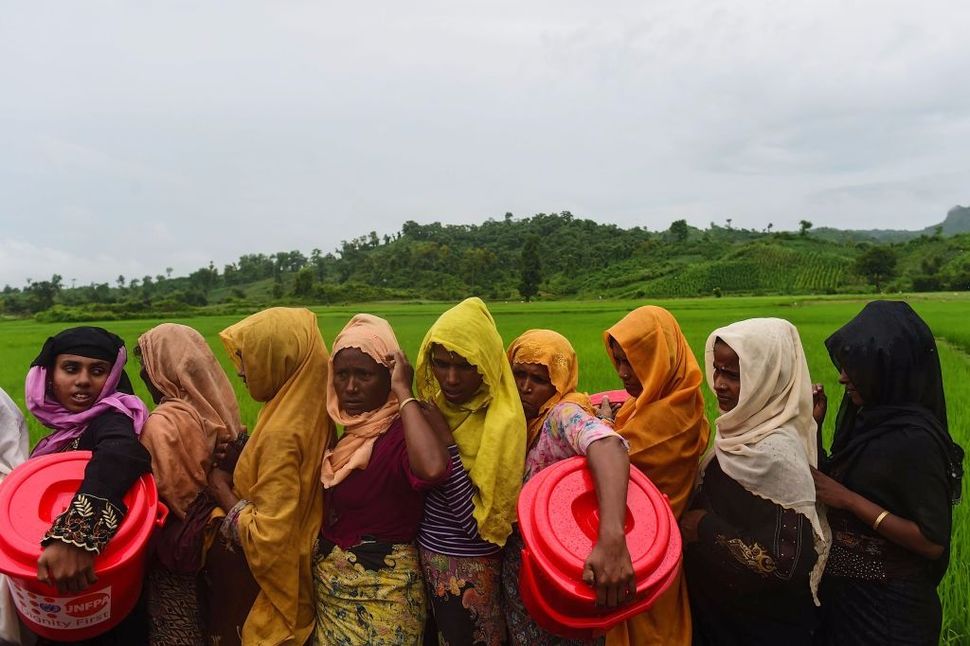 It’s almost Rosh Hashanah. I am reading about the violent expulsion of the Rohingya Muslims half a world away — villages burned, women raped, a staggering number of children orphaned and homeless — and I’m trying to figure out how I should react and what I should say to you.

This is a classic 2017 dilemma. The extreme reach of media makes us aware of crushing episodes of human cruelty that in centuries past would have gone unnoticed, but there are so many, and they seem so fierce and insolvable that I am left wondering what I could possibly write that could make any difference at all.

But there are times to be serious, and this is one of them. To ignore this suffering, so eerily reminiscent of the expulsion of Jews throughout our history, seems unforgivable. I’m trying not to do unforgivable right now.

From what I’ve learned of this crisis, a small number of radical Rohingya Muslims have committed violence and acts of terror against the government of Myanmar and even against their own people. But those provocations pale in comparison to the years during which the Rohingya have been systematically oppressed by the Buddhist majority — stripped of citizenship, restricted in movement, denied basic services, rendered stateless.

Compounding the heartbreak is the maddening role of Aung San Suu Kyi, the heroic Noble Peace Prize winner and human rights activist who finally rose to civilian power, only to now side with the Myanmar military as it commits what the United Nations calls “ethnic cleansing” of the Muslim minority. Talk about dashed hopes! I’ve admired her for years, and I shudder to think what this says about what happens when someone attains the power denied for so long.

What can be done? The U.N. is supposed to discuss the crisis in Myanmar on Wednesday. Last week, Sen. John McCain said he will strip language from a bill authorizing defense spending that would have expanded U.S. military cooperation with Myanmar. Other nations should follow suit — including Israel, which continues to arm the military.

President Trump’s spokeswoman said the president is “deeply troubled” by the plight of the Rohingya. I sure hope his reaction goes deeper than that. The United States can promote reconciliation, starve the military and the radical rebels of funding, and support refugee resettlement.

And we can speak out. “Silence is not an option,” a group of Orthodox rabbis wrote earlier this month in the Forward.

Tragically, the images of Rohingya fleeing horrific violence and living in squalid refugee camps only mirror what we have seen — or chosen to ignore — from Syria, the Democratic Republic of Congo and elsewhere, images that illustrate the worst global refugee crisis since World War II. Do we close our eyes because so many are Muslims? Or dark-skinned? Or far away?

Yet the cost of inaction is incalculable. There is already concern that the radicalization of a new generation of Rohingya will contribute to the rise of Islamic terror in the region and beyond.

We’ve seen this movie before. Rosh Hashanah offers the opportunity to reflect, renew, write a different ending. What should it be?

What I’ve been writing.

My interview with Samantha Power, former U.S. ambassador to the United Nations, touched on many of these themes. I do wonder what Elie Wiesel, of blessed memory, would say right now.

Yes, friends, yesterday was Constitution Day. On September 17, 1787, 39 very brave men signed the 4,500-word document that established our government and ensures our freedom to this day. Years ago, when I worked at the National Constitution Center, in Philadelphia, I gathered dozens of faith leaders together to take turns reading the entire document. It was a thrilling patriotic moment. It was also the day of the Eagles’ home opener, which certainly depressed turnout. (That’s another form of faith-based patriotism, I suppose.)

Football aside, this amazing document has been placed under tremendous strain this year. In a disturbing column in yesterday’s New York Times, Ganesh Sitaraman, whose work I have followed since I interviewed him more than a decade ago, warned that the Constitution may not be able to withstand the rising income inequality plaguing our nation.

If you find his argument convincing, and I do, then it helps to read this brilliantly prescient snippet from Abraham Lincoln’s first inaugural address, shared by my friend and teacher, Rabbi Michael Strassfeld:

“While the people retain their virtue, and vigilance, no administration, by any extreme of wickedness or folly, can very seriously injure the government, in the short space of four years.”