The Real Reason So Many Jews Can’t Stand Jared Kushner 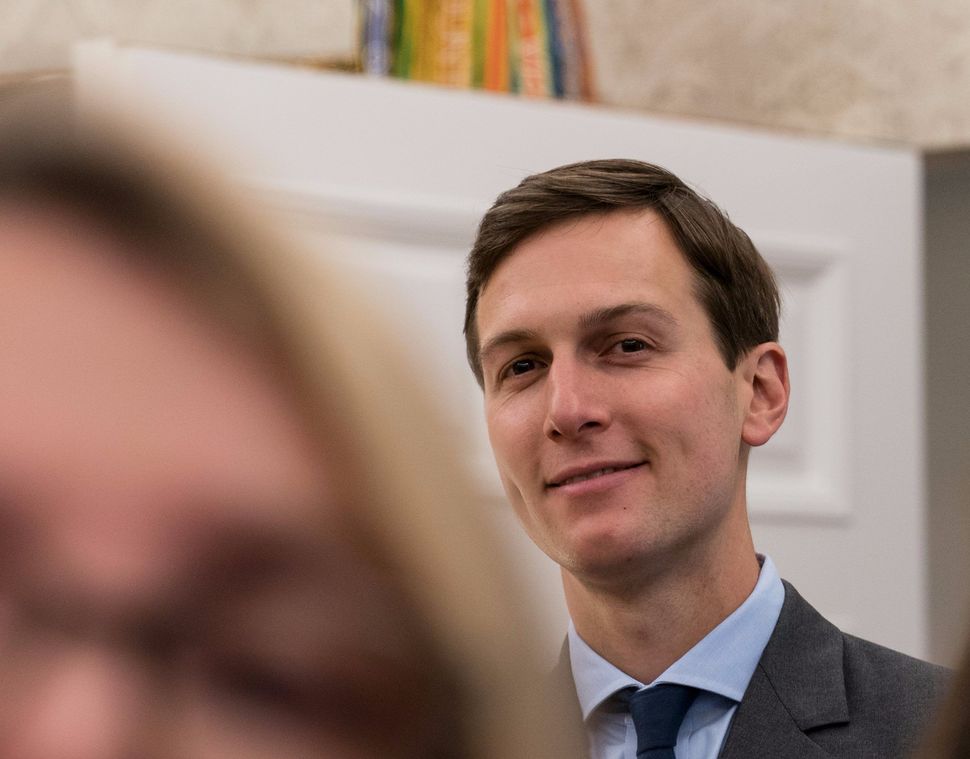 Few in Donald Trump’s administration have elicited as much attention as his son-in-law, Jared Kushner. Since Trump’s surprise November election, the mainstream media has dropped a steady drumbeat of anti-Kushner reports. So sustained and unyielding has this onslaught been that when Steve Bannon was fired from his White House post and returned to Breitbart, there was an irony to the warning that Breitbart was about to launch a full-throttled assault on Kushner. Hadn’t the mainstream media done a good enough job on its own?

In Forbes, Kushner was the penny-pinching sentiment manipulator. In The New York Times Magazine he was a litigious slumlord pursuing debts from the most sympathetic down-and-out folks. A Politico piece described “the Kushner Way” as “unfailingly polite and urbane on the surface while searching for the soft underbelly to stick the knife in.” A second Politico piece tied Kushner with the Kremlin through a Hasidic group.

Then of course there was the Russia investigation, and ongoing questions about whether Kushner assisted a foreign government in electioneering. More recently a Vanity Fair article suggested that Kushner’s discussions with Chinese and Qatari firms to help refinance a New York building “have invited uncomfortable questions about his motives and his ties to unsavory governments.” Just yesterday, we found out he has used a private email address since joining the administration.

Cumulatively, these articles hit on every Jewish stereotype to have haunted us for centuries. Disloyal double agent? Check. Shylockian insistence on payment of debt? Check. Controls the message and the media? Check. Foments political revolt? Check. Effeminate and chameleonic? Check. Worst of all, in Kushner’s case, these aren’t stereotypes, but truths. After decades of trying to convince Americans that we are not all these things, Jared Kushner embodies them all.

For this reason, we Jews — apart from a proud cohort of Orthodox Jews who moulded him — tend to hate our most famous avatar even more than non-Jewish Americans hate him, and with a passion no Jew has elicited in recent memory.

But Kushner’s trial in the court of public opinion evokes a much higher-stakes one — the real trial of Alfred Dreyfus. As Marx said, history repeats itself, first as tragedy and then as farce. Though the differences are salient — most notably, Dreyfus was innocent, whereas Kushner is probably guilty — Hannah Arendt’s analysis of the Dreyfus Affair is useful here.

In her canonical book “The Origins of Totalitarianism,” Arendt argues that Jews are on the one hand pariahs or social outcasts, and on the other hand what she calls parvenus — social upstarts who try to make it in non-Jewish society. Living on the knife-edge of outcast and upstart, Jews mostly fool themselves. “The anti-Semite tends to see in the Jewish parvenu an upstart pariah; consequently in every huckster he fears a Rothschild and in every shnorrer a parvenu,” Arendt writes.

It is this dichotomy that haunts how liberal Jews feel about Jared Kushner. Sure, democratic Jews may hate his father-in-law’s policies and the regime to which Kushner has attached himself. But the vigor of the non-Orthodox Jewish response to Kushner runs deeper. It stems from this: Having disavowed our otherness and assimilated into America’s liberties, we are made fundamentally uncomfortable by Kushner, both pariah and parvenu with his simultaneous Shabbat keeping and social climbing.

Indeed, in hating Jared Kushner, we Jews are betraying more about ourselves and our place in American society than we are about him.

Alfred Dreyfus was an artillery officer and who climbed his way up the ranks to become the first Jew on the French general staff. As such, he was an example of the French meritocratic system working; he simply excelled at the War College, explains Amos Bitzan, a historian of modern European Jewry.

Dreyfus was also emblematic of the community he came from. Seventy-thousand strong at the turn of the century when the trial took place, French Jews were becoming more and more integrated into French society. They were also becoming less and less religious, though they continued to be very Jewishly oriented and even endogamous, mostly marrying other Jews. Dreyfus himself was emblematic of this paradox, says his great-grandnephew, Emmanuel Dreyfus. A pro-Republican atheist, Dreyfus got married in Paris’s most important Ashkenazi synagogue to a Jewish woman, surrounded by mostly Jewish wedding guests.

Proud of the citizenship they had been granted after the Revolution, French Jews sought to show their loyalty to France whenever they could. They were thus shattered when Captain Dreyfus was accused of transmitting French military secrets to the German Embassy in Paris and sentenced to life imprisonment on Devil’s Island.

Two years after Dreyfus’s trial, new evidence came to light exonerating him — evidence that was quickly suppressed by high-ranking military officials. When news of this cover-up and the military’s framing of Dreyfus came to light, the case became famous, splitting French and international society. On the one hand, you had the pro-army, mostly Catholic “anti-Dreyfusards”, and on the other, the anticlerical, pro-republican Dreyfusards. Eventually all the accusations against Dreyfus were found to be baseless, and Dreyfus was exonerated and reinstated as a major in the French army. But the case came to represent the precariousness of Jewish rights.

Arendt’s analysis of the Dreyfus Affair hinges on the pariah and the parvenu. What Dreyfus exposed was that “in every Jewish nobleman and multimillionaire there still remained something of the old-time pariah, who has no country, for whom human rights do not exist, and whom society would gladly exclude from its privileges,” Arendt wrote.

But no one found it more difficult to grasp this fact than the emancipated Jews themselves. It was this denial of their precarious status that led the Jews to abandon Dreyfus, Arendt writes. To prove this point, she quotes Bernard Lazare, a Marxist Jewish scholar who called out the Jews for their refusal to stand behind their falsely accused brother. “Like all emancipated Jews everywhere, they have also of their own volition broken all ties of solidarity,” Lazare wrote. “Indeed, they go so far that for the three dozen or so men in France who are ready to defend one of their martyred brethren you can find some thousands ready to stand guard over Devil’s Island.”

Desperate to be accepted in general society and to believe their rights were guaranteed, the Jews of France couldn’t bring themselves to admit that anti-Semitism was at the core of the accusation against Dreyfus — which is why there were so few wholehearted supporters of Dreyfus in the ranks of French Jewry, Arendt writes.

“The Jews, including the very family of the accused, shrank from starting a political fight,” Arendt writes. Instead they pursued another avenue to acquittal: “To pretend that the whole thing boiled down to the possibility of a judicial error, the victim of which just happened to be a Jew.”

For Arendt, this role of Jews in society is directly related to totalitarianism. Anti-Semitism united the mob, which hated the social-climbing parvenu, with the elites, who hated the outcast pariah, making it a great unification tool for totalitarian leaders.

Interesting though this is, there’s a small problem with Arendt’s analysis: It’s not true.

Arendt was famously a terrible historian, and her account of how the Jews behaved throughout the Dreyfus Affair is deeply flawed. Indeed, the Jews stood by Dreyfus, often at great personal cost.

“It was Dreyfus’s family members and other Jews who funded the initial attempts to clear Dreyfus’s name by pressuring the military to release its evidence,” Bitzan explained.

Jews were among Dreyfus’s only supporters at first — mostly his family, but also others, including community officials. And when rumors about some kind of cover-up began surfacing in the press, most French Jews already doubted the verdict, at a much higher rate than French people overall.

In fact, the French Jewish community stood strongly by Dreyfus despite massive anti-Semitic demonstrations related to the Dreyfus Affair, including riots targeting Jewish shops, explained Emmanuel Dreyfus: “The Jews, for many reasons, were not displaying their Jewishness, but this does not imply that they were not supporting Capitaine Dreyfus.”

But though Arendt’s argument fails when it comes to analyzing Dreyfus, it is absolutely correct for understanding American Jews and our most famous member: Jared Kushner.

Unlike Dreyfus, who was innocent from the start and framed by anti-Semitic forces, JKushner may or may not have colluded with the Russians to influence the 2016 election. But it’s almost irrelevant. In the court of public opinion -– especially Jewish public opinion — he is already guilty.

I think Arendt’s analysis of French Jewry neatly explains why. At a time when our Jewishness has disappeared from our political life, and we are granted full status as American citizens, Kushner embodies all the reasons to suspect us.

Of course, the cultural differences are crucial. You can’t compare cosmopolitan France with its emphasis on assimilation with multicultural America, with its tolerance and even celebration of difference. Still, like Dreyfus, Kushner is stuck between pariah and parvenu.

“He is the nonassimilated parvenu and the assimilated pariah all in one,” the Jewish studies professor Shaul Magid wrote to me in an email. “Jared claims he can have both (as Modern Orthodoxy does), so people hate him, because he lives the life as a parvenu and a pariah, not seeing any need to compromise. And he doesn’t deny his status as both simultaneously.”

An Orthodox social upstart who is alien to his Jewish brethren, Kushner is both too assimilated and not assimilated enough.

The thing is, despite his radical visibility and his radical Orthodoxy, Kushner doesn’t represent us. Despite embodying anti-Semitic stereotypes, only the Charlottesville, Virginia, marchers seem to associate Kushner’s loathsomeness with his Jewishness.

That none of us feels the need to defend Kushner is the proof of how American we’ve become –- how certain of our rights and our position in this society. Not only can we air our dirty laundry in public without fear of reprisals, but we also get to decide who reflects on us and who doesn’t, which Jews we feel responsible for and which we do not. And no one can tell us, “Well, he’s one of yours.” Indeed, when a Charlottesville rioter tried to do just that, he was soundly criticized.

In other words, one of the most precious gifts of assimilation is the ability to dislike other Jews -– publicly. While the courageous French Jews defended Dreyfus even when their rights were at stake, we who fear nothing can’t find it in our hearts to stand up for Kushner.

What this suggests is how dependent on anti-Semitism Jewish solidarity is and, by extension, Jewish peoplehood. As Lazare said, emancipated Jews everywhere break all ties of solidarity. Kushner is a parvenu in the media; but he is only a pariah to us, the Jews, who refuse to claim him.

And this is what equal rights looks like: the right to hang our own out to dry, because Jared Kushner no more represents us than Donald Trump does.

The Real Reason So Many Jews Can’t Stand Jared Kushner