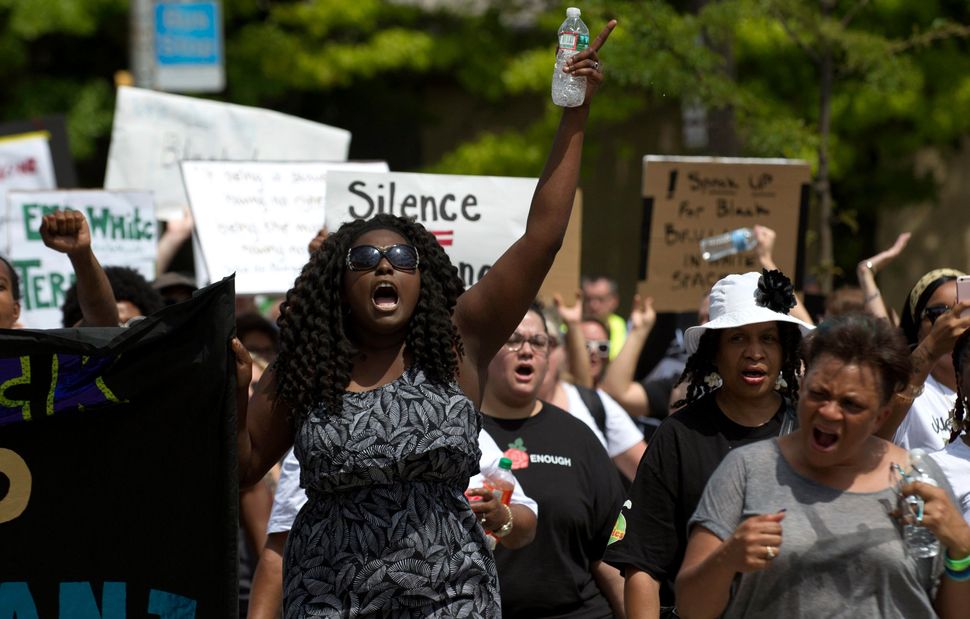 When the Jewish community learned that the March for Racial Justice was scheduled for Yom Kippur (September 30), outraged responses filled social media.

It was the immediate aftermath of Charlottesville, and we Jews had been made keenly aware that we, too, remain objects of hate by White Supremacists. It had been made clear that, like our Black sisters and brothers, we are victims of racism. To many Jews, the schedule represented more than a conflict. It felt like a slap in the face. It was “exclusionary,” even “anti-Semitic,” according to some.

Suddenly, at a time when we most needed solidarity, competing narratives, perspectives and “oppression Olympics” threatened the already fragile ties between the Jewish and Black left.

But valiant leaders like Dorcas Davis, one of the original organizers of the March, and Rabbi Jill Jacobs, executive director of T’ruah: the Rabbinic Voice for Human Rights, and April Baskin, a Black Jewish women who runs “Audacious Hospitality” (a effort of the Union for Reform Judaism to embrace the diversity of Jewish peoplehood), took part in painful but fruitful dialogue. The March organizers explained the powerful significance of September 30 – it is the anniversary of the Elaine Massacre, a brutal mass killing that claimed the lives of 237 African Americans in Arkansas in 1919. The Jewish social justice activists explained the singular importance of Yom Kippur as a day of reflection, repentance, and atonement, a day spent in synagogue and not on the streets.

An olive leaf was extended, and the March organizers decided to reschedule a sister march in NYC (a march that had already been in the works), for the next day, October 1. Jewish racial justice activists and allies of Black and Brown people, people of color, and others concerned with racial justice could now march together.

But the March organizers went beyond that. They published an apology to the Jewish community for having failed to note that the 30th was also Yom Kippur and failing to appreciate its significance to Jews.

The apology evinced extraordinary generosity of spirit. It was an exemplary model of heshbon nefesh, “taking account of the soul,” which is one of our obligations as Jews during the days leading up to the Yamin ha-noraim (Days of Awe), climaxing in Yom Kippur itself. It was beautiful and, arguably, more contrite than necessary. And it was accepted. Ruffled feathers were soothed, and all seemed well.

That was until it came to Jewish attention over this past weekend that the March for Black Women was also going to take place on September 30 and that NOW (the National Organization of Women) endorsed it. This march-within-a-march had been in the works for a while and from its inception was tied to the DC March for Racial Justice, so its date was a given. But NOW’s endorsement was seen by some Jews as another example of anti-Semitism. At least one Jewish woman publicly announced that she was resigning her membership because of NOW’s “insensitivity” to the Jewish calendar – which she claimed was verging on, if not an example of, anti-Semitism.

Predictably another crisis in the Jewish social media soon ensued. And predictably, it was framed in Jewish terms. Was this another case of anti-Semitism? Was NOW’s endorsement “bad for the Jews?” But the crisis was actually of different order. It represented yet another time when Jews of Color in general and Black Jews in particular, were erased from our community. It wasn’t the March that the departing NOW member resented. The March was for Black Women – not for her. It was the endorsement of an Organization for Women which had failed to consider its Jewish members.

I am guilty of the same myopia When I first heard (days after Charlottesville) of the March for Racial Justice, my first thought was that the march should be for all of us. It was vitally important that we march together, because we (meaning Jews and Black people)stand at a critical moment. Decades of distrust have festered on both sides. White Jews seem to believe that we should get permanent credit for having been a part of the Civil Rights Movement a half-century ago and resent what is seen a lack of appreciation for the role Jews played back in the day. The violence of Crown Heights in the early 1990s and its political and rhetorical aftermath left deep and visible scars and helped to create a seemingly unbridgeable gap between our two communities. Sectors of the Black community, absorbing anti-Semitic tropes about Jewish control of money and press, have demonized Jews above other white populations.

I didn’t see anti-Semitism, but I nevertheless thought that the scheduling was unfortunate and hoped that it would be changed. And when it seemed it would not be changed, I was almost brought to tears by the frustration over what I saw as a squandered opportunity for our communities to stand together under the same banner at the same time.

I didn’t see anti-Semitism, but neither did I see that charges of anti-Semitism perpetuated a false dichotomy separating Jewish and Black people. I forgot about the hundreds of thousands (7% among self-identified American Jews) of Jews of Color who are part of our community.

My reaction to the March for Racial Justice also came from a place of both bias and privilege as I learned from a powerful webinar organized by JFREJ (Jews for Racial and Economic Justice) featuring two extraordinary Jewish women. One, a Jew of Color spoke of her fury over the reaction by white Jews to the September 30 date and her anger over the assumption that it was the responsibility of the March organizers to be conciliatory. The other, an Ashkenazi Jewish woman explained that she realized her response to the scheduling crisis came from two places: hurt and privilege. Hurt, because the insidious nature of anti-Semitism in this country which she had always known was present was on such obvious display at Charlottesville, and she wanted to be able to join with Black and Brown Americans in protest. Privilege, because as a white person, she assumed that she should have been consulted, that her needs should have been considered when the March was scheduled.

In a nutshell, these two responses should inform how we respond to the March for Black Women, the March for Racial Justice, for any action scheduled that may conflict with the Jewish calendar. The truth is, it not anti-Semitic for an organization to schedule a march, a rally, or an action on Yom Kippur. Doing so does not exclude Jews from the movement for racial justice. It is not as if there is only one march/rally/demonstration to join, that the march on a Jewish holiday represents the only chance to stand in solidarity. There will be others.

Dr. Rabbi Barat Ellman is a professor of religion, theology and Judaism with the Bard Prison Initiative and at Fordham University.