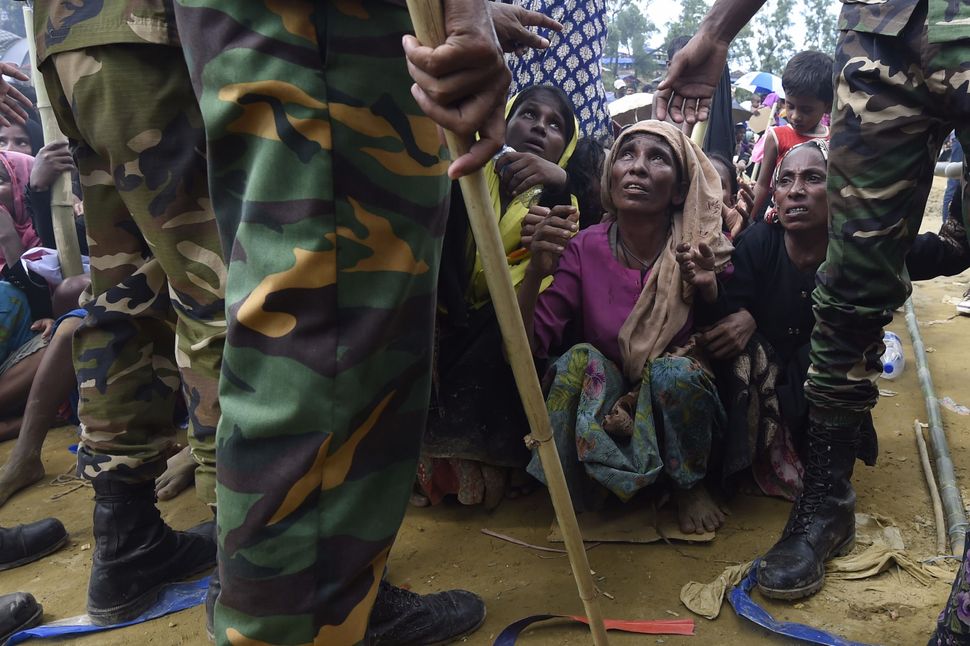 As hundreds of thousands of Rohingya people are expelled from their homes in Myanmar in one of the most severe examples of ethnic cleansing in recent times, Myanmar has been getting weapons, military training, and skills from a dismaying source: Israel.

I’m not the only one who feels dismay that the Jewish State is allowing the supply of Myanmar with the tools of ethnic cleansing. Yesterday, Eitay Mack, an Israeli human rights lawyer, filed a petition in the Israeli Supreme Court asking for the state to halt the supply of weapons and skills which have been used in the Rakhine State in a brutal campaign of violence against the Rohingya.

On the same day, in an open letter to Prime Minister Benjamin Netanyahu and government ministers, several Israeli rabbis and religious leaders joined their voices to the call to stop the collaboration with the Burmese military. The spiritual leaders wrote that it was unthinkable that the Jewish state, “built on the vision of the prophets of Israel,” would assist this regime. “As rabbis, female religious leaders, educators and communal leaders who go in the ways of the Torah, ‘whose ways are ways of pleasantness and all its paths are peaceful,’ we cannot be silent when the State of Israel assists those in the world who destroy in their destruction,” wrote the leaders.

Rakhine is home to an estimated 1.1 million Rohingya, a stateless Muslim minority that has suffered from more than forty years of persecution. This most recent escalation of state violence against the Rohingya began when attacks were launched on dozens of state security stations by the Arakan Rohingya Salvation Army (ARSA), killing twelve people. The resultant government “cleansing operation” has sent nearly 400,00 Rohingya fleeing Myanmar into neighboring Bangladesh since August 25.

Escaping refugees report extra-judicial killings, gang rape, infanticide and the throwing of elderly people into burning buildings to their death. Satellite imagery, showing widespread destruction of Rohingya villages, backs up their claims. The United Nations High Commissioner for Refugees, Zeid Ra’ad Al Hussein, has called recent events “a textbook example of ethnic cleansing.” Maung Zarni, a Burmese Buddhist human rights activist with the European Center For The Study of Extremism, active for years in defense of the Rohingya, goes even further. “This is genocide,” he told me.

Ethnic cleansing requires tools. The arms and training from Israel comes from companies like TAR Ideal Concepts, which bills itself as a “police and military equipment one-stop shop” and has been supplying tanks, weapons, and training to the Burmese special forces.

But Israel also has a long history of friendship with Myanmar, dating back to before the coup that put the military in power for more than fifty years. Burma was the first Asian country to recognize Israel, and in 1961, Ben-Gurion, prior to a diplomatic visit to the young Union of Burma, said, “In all of Asia, there is no more friendly nation to Israel than Burma.” Then head of state U Nu was the first foreign prime minister to visit Israel on a state trip.

Both Israel and Burma gained independence from Britain in 1948, and both faced severe conflict between the majority and minority ethnicities in their young nations. When General Ne Win led a coup against U Nu’s government in 1962, he replaced it with a hardline Burmese nationalist government that has since systematically disempowered and oppressed non-Burmese minorities.

Perhaps the most egregious example of Israeli friendship with the Burmese military came in 2015, when Min Aung Hlaing, the Burmese Military Chief of Staff, visited Israel. Though Israel had not announced the tour and was quiet about its details, Mack says Hlaing was eager to share them on his Burmese-English Facebook page, where he detailed his tour of IDF bases and his sampling of Israeli military goodies. Hlaing, who is widely seen as a war criminal, is regarded as the chief architect of the violent campaign against Rohingya civilians in Oct 2016 which sent 74,000 Rohingya fleeing to Bangladesh and led to 100,000 homeless Rohingya ending up in displaced persons camps in Rakhine State.

Israel is not alone in shamelessly befriending Hlaing. He made several similar visits to India, the UK, and Europe. But Jews know from ethnic cleansing; the Jewish State was founded as a response to it. As such, Israel should know better.

Hlaing’s visit is not the only recent example of Israeli cozying up to the Burmese military. Mack’s petition also points out that the head of the defense exports branch of the Israeli Defense Ministry, Brig. Gen. Mishel Ben Baruch, visited Myanmar in June 2016 and met with heads of military regime there.

Mack points out that prior to the various petitions he has launched before the court on this and related issues, including historic Freedom of Information requests, there was no legal oversight of Israeli security exports. Last year, when Mack put forward a petition dealing with Israeli collaboration with Rwanda and Bosnia during their ethnic cleansing campaigns, the state asked for a gag order on the trial and the judge agreed. That hasn’t happened this time.

“The Israeli public is watching,” Mack told me. “I do not see how the Supreme Court can support aiding and abetting crimes against humanity. By doing the right thing now they have a chance not to repeat history.”

There is no moral justification for Israel to allow the sale of arms to states implicated in human rights abuses and crimes against humanity. Until Myanmar has truly undergone radical reform (and signs suggest that’s a long way away), Israeli collaboration with Myanmar must stop.

Update: Since this piece was published, the Ministries of Defense and Foreign Affairs and the State Attorney have successfully filed an urgent request to retroactively classify the entire case of Israeli sales of arms and training to Myanmar. As a result of this “retro-active classification” the court’s decision on Israeli arms and training being supplied to Myanmar will in fact not be made public.