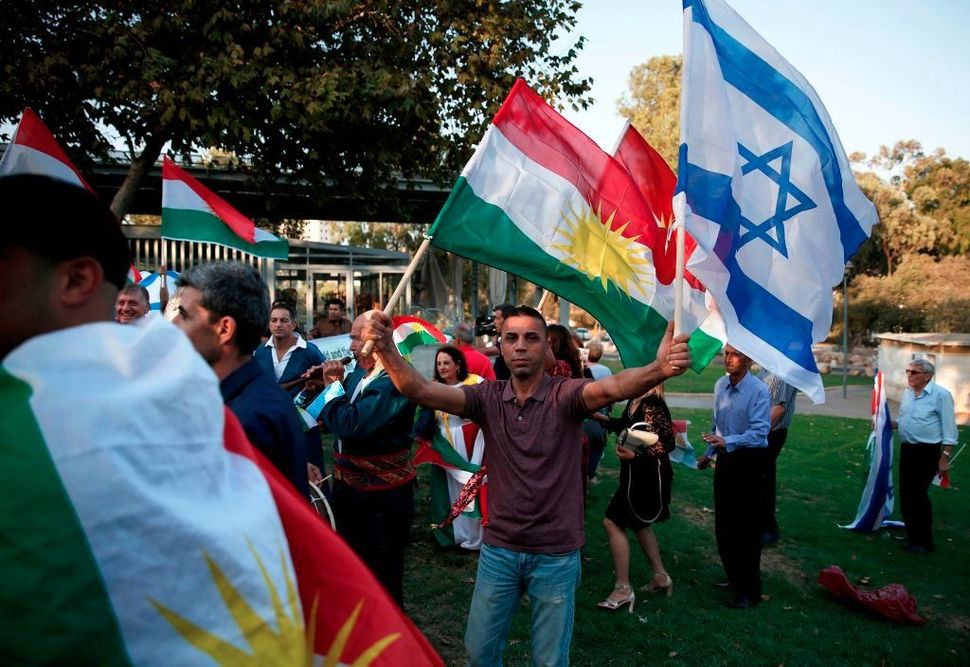 “We have no friends but the mountains,” is an old Kurdish saying.

No friends but the mountains — and Israel — is the reality. There is a deep affinity between Israel and the Kurds. Israeli Prime Minister Benjamin Netanyahu was alone among world leaders when he endorsed Kurds preparing to vote in an independence referendum.

But it was a rare public declaration of this secret closeness. Israeli-Kurdish friendship is the geopolitical love that dares not speak its name, for the Kurds would prefer it be kept quiet. Open alliance with the Jewish State remains a taboo for most countries in the Middle East. It makes it all the more ironic that Kurdistan is commonly referred to as “Yehudistan”.

There are 22 million Kurds, the world’s largest ethnicity without a homeland. Since the Great War they have been split between Iraq, Iran, Syria and Turkey. They have never stopped agitating for a country of their own and have been brutally suppressed for their nationalist politics. This past Monday, the referendum took place. Nine out of ten Kurds voted for independence, but that’s only a major first step. The central government in Baghdad won’t let Kurdish independence happen without a fight, nor will the surrounding nations — Iran, Turkey and Syria, with large Kurdish populations of their own — allow it. Nor will the United States, which is committed to maintaining the territorial integrity of Iraq.

But Israel has long held a slightly different view of the Kurdish struggle for independence. In some ways, Israel’s view is pragmatic. The Middle East could do with another secular democracy.

In other ways, it is profoundly emotional. The two peoples understand each other because they have suffered similar historical pain. Kurds and Jews share ancient attachments to their land, connections they can trace back for three or more millennia. The difference is that Jews were dispersed from their land and are only just reclaiming it. In fact, just as Jews began to see their national dreams blossom into possibility — at the end of World War I — the Kurds were seeing their land dismembered before their eyes. They have yet to recover.

This bond of diaspora or dismemberment has always united Jews and Kurds. Kurds, too, see the connection, explained Eliezer Gheizi Safrir, Mossad’s station chief in Kurdistan, in the mid-1970’s.

“They called me Kak Gheizi,” he said proudly. Kak or kaka means brother. It is a term of friendship. “These are good people,” says Gheizi. “They share the same values as Jews.”

But the relationship between the Kurds and Jews has a historical aspect, too. Gheizi was there at the beginning, in the mid-60’s, when Mullah Mustafa Barzani, the first leader of the modern Kurdish independence movement, flew to Israel to ask David Ben Gurion for support.

“They asked us for three machine guns and one broadcasting station,” Gheizi laughs. “That was the beginning.”

Ben-Gurion knew the relationship had to be secret. The regional sensitivities were too great; Israel’s Arab neighbors would have seen overt help to Kurds trying to break away from an Arab country as an act of aggression.

For these reasons, Ben Gurion assigned the Mossad to handle it.

Next came training of the Kurdish guerillas, the peshmerga. “We gave them a whole line of training, from small group commander to battalion commander,” Gheizi explained. “We supplied them with field cannons thanks to the generosity of Arab Armies who left us this equipment in the wars.”

But the main thing Mullah Mustafa wanted from Ben Gurion was an introduction. According to Gheizi, Barzani would tell Ben-Gurion, “Amrika, please bring Amrika to help us more.” When Barzani heard Henry Kissinger was in Israel, he called Gheizi and said, “Tell Yitzhak [Rabin] to bring him by the ear to meet us here.” But Israel was unable to deliver America.

But the history goes back much further than Ben Gurion. Jews lived in Kurdistan from the time of the destruction of the First Temple. Not all those dispersed during that catastrophe were taken to Babylon, and some ended up due north a few hundred miles in the Kurdish mountains. They remained there until the early 1950’s, when they were airlifted to Israel as post-colonial Iraq took on a determined anti-Semitic color.

I first reported from Kurdistan in 1996 and felt this inexplicable affinity for the place. Don’t laugh when I say it felt like my ancestors must have passed through 1500 years ago on their way north to the Black Sea and into the heartlands of Ashkenaz.

In 2003, back in Kurdistan to cover the Iraq war, I got to understand this feeling better. My translator and brother, Ahmad Shawkat, took me to a town called Shaqlawa. It was a Jewish village when he was a boy, famous for its wine. Even after the Jews left, wine was made there, and the Muslim teenagers went there to drink it. He also educated me on the religious diversity that was a key element to the Kurds’ cultural and ethnic distinctiveness: Jewish Kurds, Christian Kurds, Muslim Kurds.

Kak Ahmad was murdered shortly after Saddam was overthrown, and I wrote a book about him. I try to stay in touch with his family. Two years ago, his youngest son took me into the mountains to a town called Akre, not far from the ancestral home of the Barzani clan. It had a large Jewish community until the early 1950’s. He took me to the site of the town’s synagogue. It stood empty for two decades and then had been destroyed on the order of Saddam Hussein. As we stood there, a man came out to chat. He lived in the house next door to the empty site. He told us that shortly after Saddam was overthrown, a group had come from Israel — former residents of Akre and their descendants. They wanted to pray in the synagogue, but there was nothing left. The man invited them into his home and on the terrace they made a minyan and held a service.

A few days later, Ahmad’s son took me to visit a peshmerga outpost on the ISIS frontline north of Mosul. Behind us was the ridge of Jebel Maqloub with the Mar Matte monastery carved into its side, a reminder of the stupendous religious tolerance in Kurdistan. In front of us were the plains of Nineveh, dust on the horizon was Mosul 25 miles away. Somewhere in a fold of land a kilometer away was ISIS.

The Peshmerga commander spoke into my microphone and asked the world for help. He didn’t care where it came from. Even from Israel? He laughed. “The Israelis are our cousins, we welcome them,” he told me.

Kurdish independence won’t happen soon, and relations with Israel will continue to be opaque. Mullah Mustafa’s son, Massoud Barzani, runs the Kurdistan Regional Government. Open acknowledgement of friendship with Israel will not help him.

Nor did it help when, two weeks ago, Turkish President Recep Tayyip Erdogan expressed his displeasure with the referendum and Netanyahu’s endorsement of it. This week, Bibi changed tactics and issued a cease and desist order to his cabinet, saying no one was to discuss the result publicly.